The 57th Rolex 24 at Daytona was a great race for about 18 hours and a washout for the balance of this twice-around-the-clock winter classic.

This race has been impacted by poor weather and red flags many times before, but the amount of rainfall during the final daytime hours, coupled with the pace of all four classes – now all using Michelin race tires that are notably quicker than the former Continental spec rubber previously used by all but the GTLM class – made even the rain-affected race that much more competitive all around than in the recent past.

Wayne Taylor Racing’s No. 10 Cadillac DPi took its second overall victory in the contest  (their first came in 2017), called with 10 minutes remaining after the cars had been under red flags for the second time. Monsoon conditions affected nearly every surviving car in DPi, LMP2, GTLM and GTD from the 15th hour on, as many aquaplaned and spun off the 3.56-mile, 12-corner road/oval Daytona International Speedway circuit. 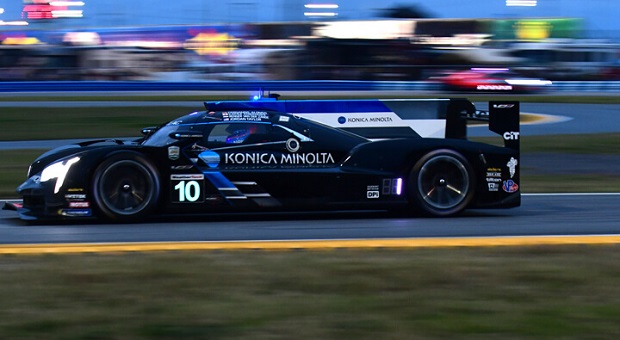 The quartet of Fernando Alonso, Kamui Kobayashi, Renger Van Der Zande and Jordan Taylor completed 593 laps, leading 249, before their car was taken to Gatorade Victory Lane for celebration, with Alonso finishing the final stint. Alonso was over-the-moon with his victory in such difficult conditions. 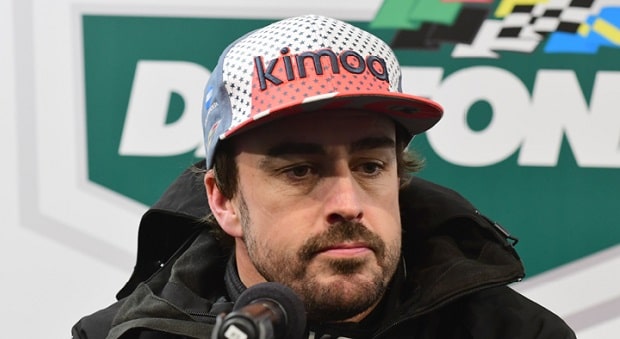 “Just an amazing experience with the team from the test, now to the race,” the two-time Formula One champion said. “A perfect execution of the race. Very different conditions for all the competitors from in the dry, wet, night, so really happy for the team.

“It’s too bad we didn’t get to race the full distance, but we led the race in night, day, dry, wet so I think we all kind of deserved this one. You had to survive every lap,” Alonso continued. “The conditions were quite a shock sometimes. It wasn’t a matter of lap times or anything like that. It was a matter of crossing the line, putting the lap together and, at the end, it worked.”

The No. 31 Action Express Whelen Cadillac DPi secured second place with Felipe Nasr at the wheel, while Alexander Rossi brought Acura Team Penske’s No. 7 Acura ARX-05 DPi in third, the last car on the lead lap. Core Autosport’s No. 54 Nissan DPi took fourth place (Loic Duval driving), four laps back of the podium finishers, while the JDC-Miller Motorsports Cadillac was fifth, seven laps in arrears, with Devlin DeFrancesco at the wheel. 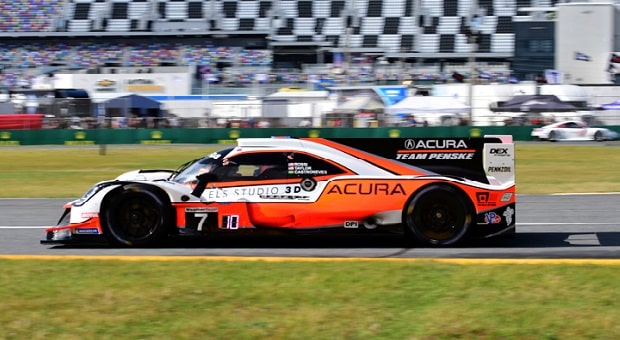 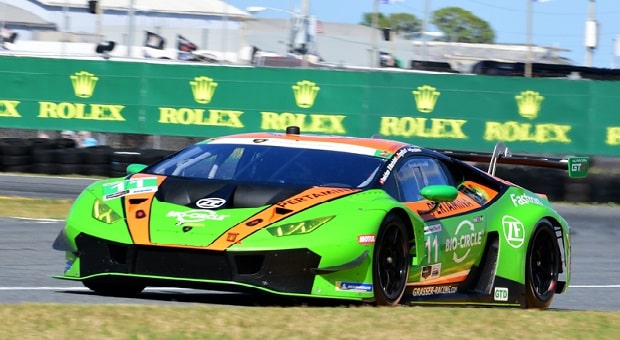 Qualifying on Thursday afternoon brought few surprises. As at the Roar before the Rolex 24 test days earlier this month, the No. 77 Mazda Team Joest Mazda RT24-P DPi was quickest, turning an official lap of 1:33.685 seconds at 136.792 mph. That lap broke PJ Jones’ 26-year-old record, set in one of Dan Gurney’s All American Racers’ Toyota prototypes. The two Acura Team Penske DPi  cars were second and third, as the first nine slots went to DPi entries. 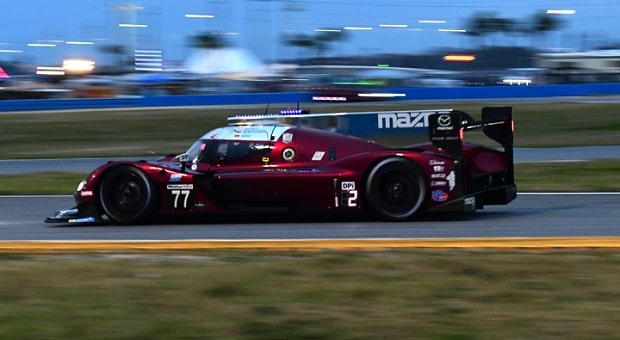 The No. 77 Mazda would be out of the running before the 12-hour mark, after leading in the early going. Its stablemate, the No. 55 would also fall by the wayside, albeit in the morning hours as rain steadily fell, both succumbing to engine issues. The No. 55 earned ninth in class after finishing 440 laps, 42nd overall, the No. 77 was 11th in class, 46th after completing 220 laps.

Action Express’ No. 5 Cadillac failed to make a qualifying lap and had to start next to last; watching this car maraud through the field to the front was part of the early fun, even with an elongated stop before the three-hour mark to an address an electronics issue, putting them back in 45th. 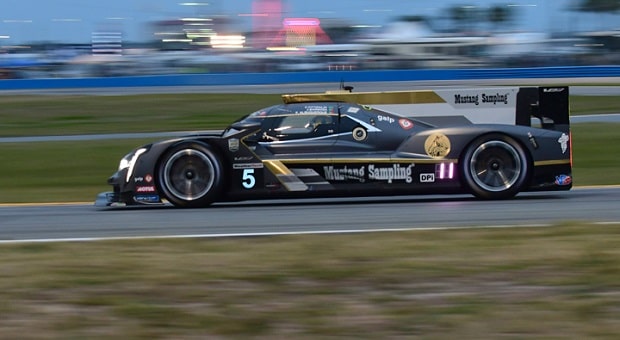 It wasn’t the kind of run driver Christian Fittipaldi was hoping for in his final driving experience; the three-time Rolex 24 winner was hoping for a fourth Rolex watch and his second consecutive. The versatile Brazilian was notably emotional when he came to the media center following his final stint. The No. 5 finished ninth, 20 laps back of the winners. 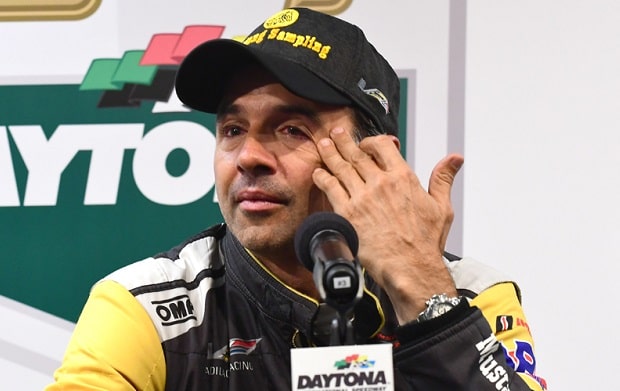 The battle in GTLM was hard fought from start to finish, with epic battles between the class-winning BMW, the No. 62 Ferrari 488GTE from Risi Competizione, the two factory 911 RSR (decked out in Brumos Racing celebratory colors), the two Ford Its and the brace of Corvette C7.R yellow racers. 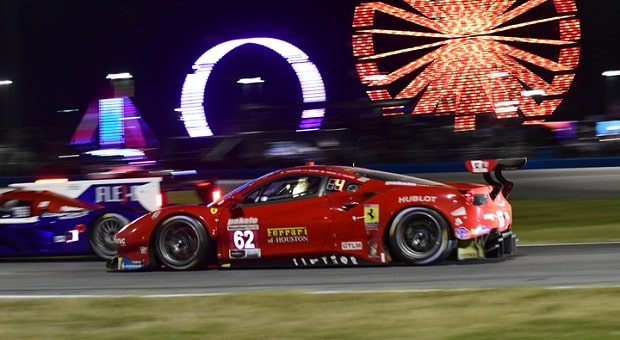 All eyes in GTLM, though, were on Alessandro Zanardi, returning to American competition in the No. 24 BMW. The two-time CART champion, who lost his legs in a 2001 racing accident, was competing with hand controls while his teammates used pedals. It wasn’t the race he’d hoped for, as his car finished ninth in class and 32nd overall, completing 553 laps. 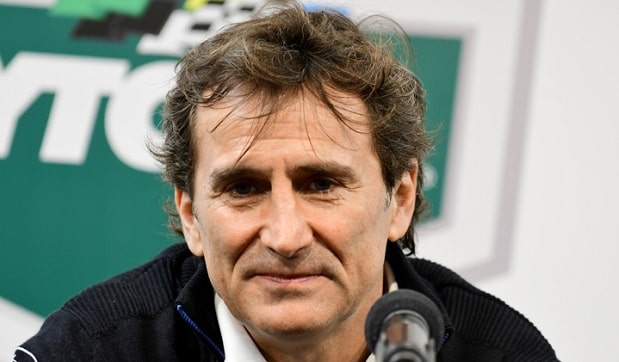 With the 57th Rolex 24 at Daytona in the books, teams get a bit of time to recuperate before testing at Sebring International Raceway in anticipation of the 67th Mobil 1 12 Hours of Sebring, scheduled March 16th. Once that contest is complete, the IMSA teams, all celebrating the sanctioning organization’s 50th anniversary, will have survived what everyone refers to as The 36 Hours of Florida.