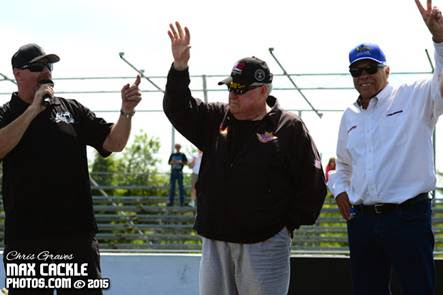 The legends spent the weekend in Tulsa socializing with spectators and watching old school drag racing action as fans lined up and waited for hours for the chance to meet the beginners of our sport.  Over a dozen other racers were honored throughout the weekend, including many of Oklahoma’s legendary names like Benny “The Wizard” Obsorn, among others.

A full round of nitro funny car qualifying was scheduled for Friday night along with classes for A/Fuel, Jr. Fuel, Central States Superchargers, and multiple bracket categories.  Due to weather, however, TRP staff made the decision to call the racing action for Friday night and pick it back up on Saturday morning.

Racing got underway on Saturday morning at 11 a.m. All eyes were on Rick Krafft, driving the Oklahoma based “Invader” Corvette, when a chain of mechanical failures in the engine caused a massive back up of pressure in the manifold and released a boomer that sent the Corvette body flying high into the sky halfway down the strip.  Thankfully, Krafft was able to keep the car off the guardrail and walk away uninjured, but the team was done for the weekend.

The A/Fuel class started off as a seven car field, but that number quickly decreased as parts attrition took its toll.  John Harless took the top qualifying position in the “Grand Prix Auto Centers” dragster with a 6.36 at 213 mph.  Frank Mazi, who came all the way from Eastlake, Ohio, qualified second with 6.92 at 191 mph.

The Central States Superchargers brought the biggest field of entries to Tulsa with sixteen cars.  Brent Laney took the top spot with 4.26 at 167 mph in his blown dragster.  Laney is the most recent winner on the CSS tour after his win last month in Tulsa.  Ken Singleton qualified second with 4.33 at 135 mph in his “High Risk” blown altered.

Between the qualifying rounds, Snake and Mongoose could be found with a hundred foot long line of spectators waiting to shake hands with the pair of legends and get their merchandise autographed.

Pre-race ceremonies began at 6:30 p.m. and included recognition of over a dozen area drag racing legends and introduction of the participants in an impressive pin-up girl contest.

The second session of nitro funny car saw Ronny Young again leading the times with a 6.47 at 164 mph.  young and Bowen earned spots in the final round of the DRO Nostalgia Nitro Challenge.

Next up was A/Fuel with five cars remaining.  Top qualifier John Harless posted a 6.39 at 213 mph and Frank Mazi ran 6.80 at 192 mph, earning them spots in the final round as the two quickest winners.

Ten cars were paired up in CEntral States Superchargers action and Roger Lechtenburg kick off the first round with a 4.04 at 182 mph.  Ken Singleton then ran a 4.01 at 180 mph, and the two earned spots in the final round.

In Junior Fuel, Odie Coker and Mike Millsap posted times quick enough to take spots in the final round with a 7.37 at 177 mph and a 7.49 at 173 mph, respectively. 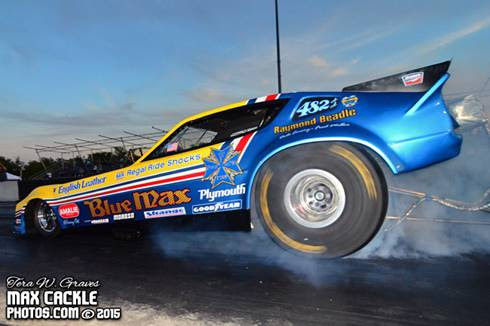 In the final round of Central States Superchargers, Singleton laid down a career best 3.97 at 181 mph and held off Lechtenburg’s 4.04 at 183 mph to take his first win in the CSS series. 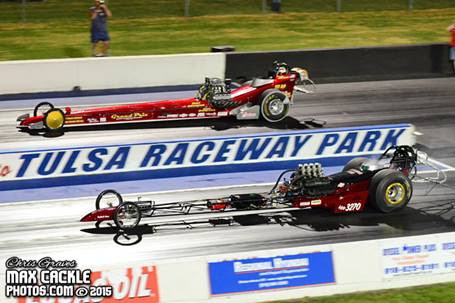 Junior Fuel saw Millsap win over Coker after Coker’s car made a wild shot to the centerline, forcing him to abort the run.  This was Millsap’s first SWJFA series win since 2013.

The event was capped off with a pin-up fashion show and more live music for the fans who stuck around after the racing action ended.  A special award honoring 50 years of drag racing at TRP was presented by the NHRA to the track, accepted by Todd & Keith during pre-race ceremonies.  The ceremony also included a special award given to Jon Brook for his achievements and dedication to the sport in the Tulsa area.