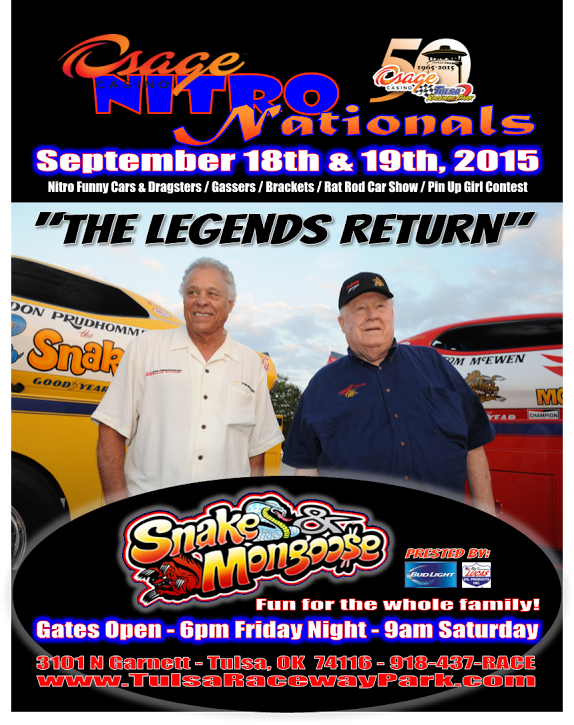 Osage Casino Tulsa Raceway Park will be celebrating its 50th anniversary next month and will be highlighted by drag racing legends Don “the Snake” Prudhomme and Tom “the Mongoose” McEwen.

“on an annual basis, it’s one of our biggest shows,” said Todd Martin, co-owner of the track along with Keith Haney.  “This year, it’s going to be our top show.  It’s our 50th anniversary, and there aren’t many tracks in the country that can say they’re 50 years old. It’s a total throwback.”

In the past, Don Garlits and Shirley Muldowney have appeared at Tulsa Raceway Park, but to have “Snake” and “Mongoose” there at the same time is a big deal.

Numerous other special guests will be in attendance at the Nitro Nationals which will take place Sept. 18-19 with several events planned during the two-day celebration.

“[All special guests have] brought in great crowds, but to have ‘Snake’ and ‘Mongoose’ together is great,” Martin said.  “That was one of the greatest rivalries there ever was in drag racing.”

The two were a big part of the track’s early days, and their races with their famous Hot Wheels Funny Cars were part o the match-race shows.

“It’s going to be fun going back to Tulsa,” Prudhomme said.  “I haven’t been there in many years.  It’s one of the main tracks that got the ‘Snake’ and ‘Mongoose’ going, where we match-raced in the early days.  It was a big part of what we did, so to go back and see it and see the fans, it’ll be a great time.”

“At a big PDA race (Tulsa) had, I beat him in the final years ago,” McEwen said.  “We’ve run there a lot, and it’s a nice racetrack.  We’re looking forward to coming in for the weekend.”

Having these two legends is something that the fans and organizers are incredibly excited for.

“There will be new fans, old fans, all kinds of people,” McEwen said.  “When our movie came out, they had a big thing in the town, and they showed it in the theater for six weeks.  A lot of people when to it, so Tulsa is a drag race town.”

“What’s so cool about it is it left a lot of great memories for young kids coming up,” Prudhomme said.  “I’ve had kids say to me, ‘You changed everything for me.  I wasn’t really doing much, but I got into cars because I got so excited about it.’  Those are nice things, and we get that a lot.”

Other racing legends will be in attendance, including Benny Osborn, John Collins, and Mike Edwards, among others.  Tickets for a private meet-and-greet on Thursday night will be available to the public.

Other events planned for the two-day event are: