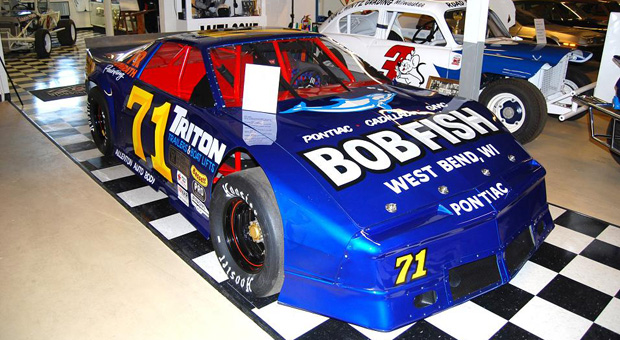 Dick is technical director of Slinger Super Speedway and a member of the Board of Directors of the Southeast Wisconsin Short Track Hall of Fame in the Wisconsin Automobile Museum in Hartford.

We featured the Hall of Fame last year, but Dick said it’s been expanded. In the past a few cars were displayed close together in a smaller section of the building. Now there are several rooms of racing memorabilia with the cars spaced apart and plenty of room foe showcases displaying everything from helmets and racing suit to the yellow rubber duck that was driver Bernard Binon’s mascot. Framed photos of Hall of Fame inductees decorate two entire walls.

Also adorning the walls in their glass-framed beauty are historical photos from tracks such as Slinger, the Milwaukee Mile and Hales Corners showing famous cars and famous drivers from all eras of racing in the Milwaukee area. Hundreds of black and white and color images show the action and the checkered-flag-holding winners from years passed.

The November induction ceremony will be held at the Schauer Arts and Activities Center next to the Wisconsin Automobile Museum at 147 N. Rural St., in Hartford, Wis. Tickets will be available soon through the Schauer Box Office.

Dick said the Hall of Fame’s first outdoor event will be at Cedarburg on June 6. A racing swap meet is part of this event. The entire show is free and open to the public. Anyone wishing to show a car, truck, go kart or racing car can join in the fun. Visit the Hall of Fame Website for full information about the show.

The accompanying photos show the newly-expanded Southeast Wisconsin Short Track Hall of Fame. If the collection keeps growing as fast as it has been, it might start to rival some of the biggest racing museums in America.