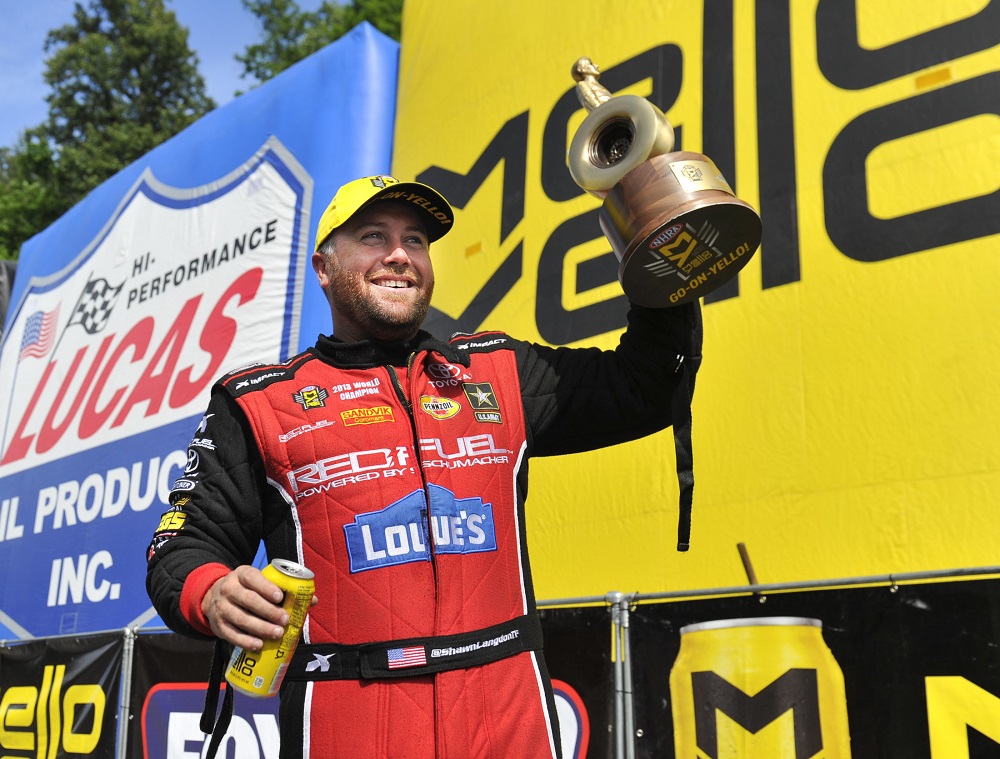 As the NHRA Mello Yello Countdown to Championship reaches its midway point, the tour travels to this weekend’s Maple Grove Raceway in nearby Reading, Pa. for the Dodge NHRA Nationals.  The importance of this race is due to the numerous upsets in St. Louis, which provided plenty of upheaval in the standings.  The biggest mover and shaker to emerge in the Top Fuel category was Shawn Langdon, vaulting from seventh to fourth in the standings after winning his third race of the season and now only 77 points out of the lead.

Going into that race, the outlook for Langdon’s campaign was uncertain after losing the first round in Charlotte and thus slipping in the points.  His steep climb back into prominence started with the Red Fuel/Sandvik team countering with a crucial round win to alleviate potential elimination of his Don Schumacher Racing team, beating his teammate and defending champ, Antron Brown.  Everything hung in the balance with that one round; from there he had ‘monster matchups’ the rest of the way. 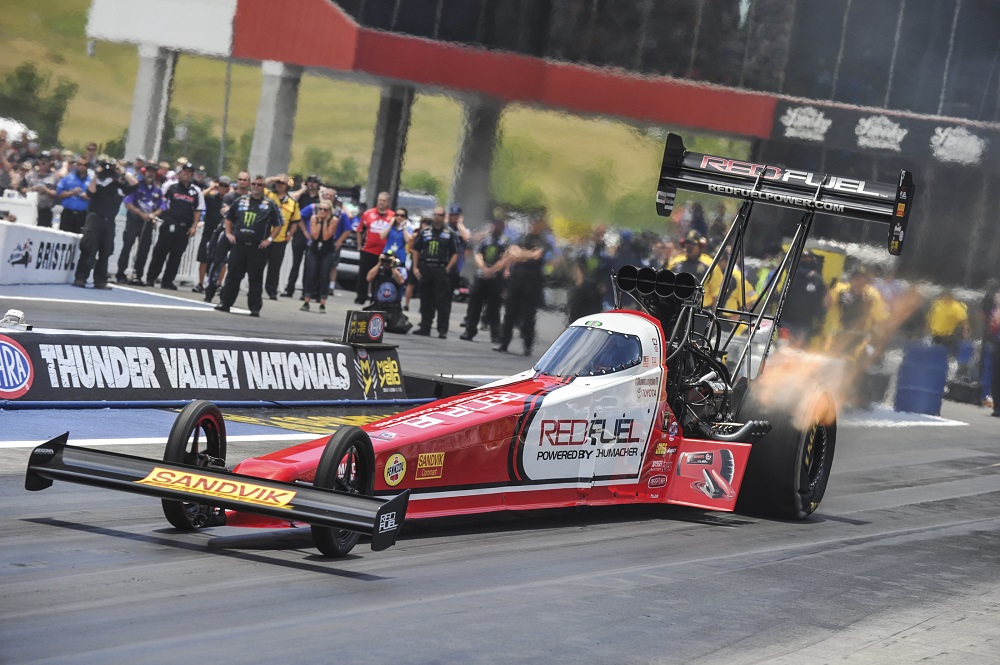 “It gives us a good shot now,” said a confident Langdon.  “Going into that event, we were 160 plus points out of the lead, which basically set us eight rounds out of first place with five races to go.  We had a huge match up with Antron, our teammate, first round.  If we had lost that round, we were facing going to the next four races then nine rounds out.  Losing that round probably would have knocked us out of contention and we knew what was at stake going into that first round.

“We definitely didn’t have an easy side of the ladder and we had a pretty difficult way to get to the final.  You know, we took it one round at a time and focused on keeping the car consistent.  We had a good car in qualifying.  We just tried to treat each and every individual round differently, trying to race smart.  Just do everything we felt we could do to give us the best chance to win the race.”

That ‘not so easy’ side of the ladder consisted of Brown, Doug Kalitta, No. 1 Qualifier Richie Crampton and, in the finals, eight-time champion Tony Schumacher.

“In this day and age there’s really no easy draw that you’re going to get first round,” said Langdon.  “There’s so many good competitive race cars out there, you never really ever take any rounds lightly.  Obviously running Antron, they’re our teammate and they are first in the points, and have won the most races this year.  We know what that team is capable of, so I guess, that was a little bit in the back of our mind.

“We knew we had to make a good run.  Fortunately, we were able to have lane choice, so we felt a little bit more confident being in the right lane.  It’s never an easy road getting to the final round.  This was probably one of the toughest roads that I’ve had to face with Antron, first in points Doug Kalitta, second in points Richie Crampton, the No.1 Qualifier, and then going into the final round against Tony Schumacher, who is an eight-time champion and No. 3 in points.  Obviously, Tony is known for his clutch performances.” 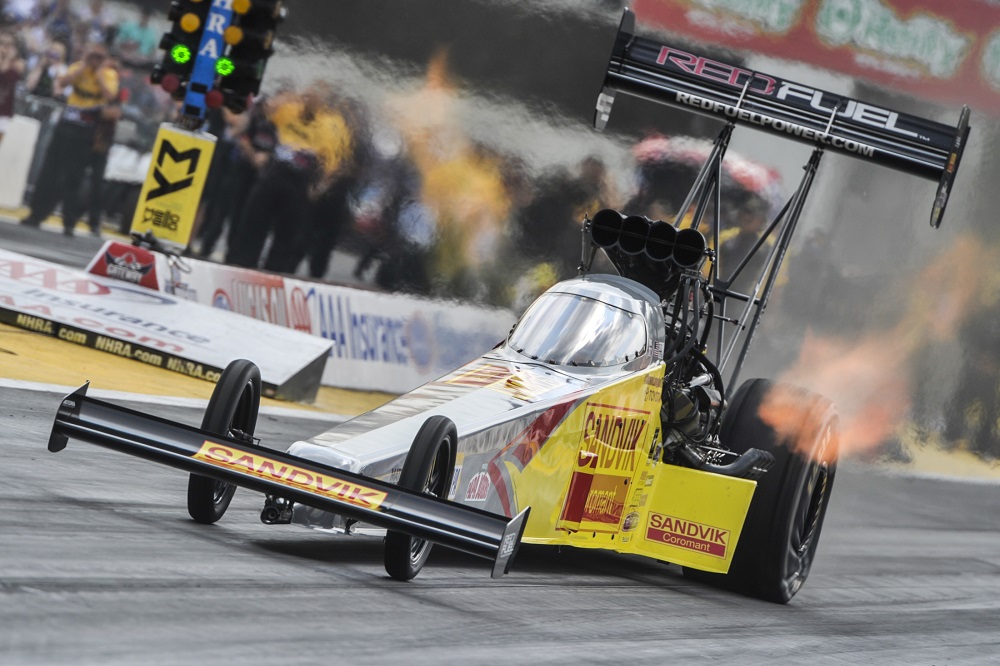 “Looking back on it, it was a picture-perfect weekend,” said Langdon, the 2013 Top Fuel champion.  “I don’t think we could have scripted any better with how everything played out.  As I’ve said earlier, at the end of the race, you don’t want to, ideally, in the perfect situation, run your teammate first round, but with our situation for our Red Fuel-Sandvik team, we needed Antron to go out early for us to have a chance at the championship.  Taking all those guys out, we maximized our potential in the points category of making up the most rounds for the championship.”

His starting line abilities are impeccable; that comes from Langdon’s sportsman racing background. He grew up around the sport.

“When I’m racing my sportsman car at a national event, it’s from the instant, Friday morning, that I have that race mentality going,” said the 34-year old, originally from Mira Loma, Calif.  “It’s just a different frame of mind.  I probably had one of my best driving performances that I felt that I’ve had in a long time, probably since the 2013 season.  I don’t know how it all transpired or how it all came about; it was the sportsman racing that kind of got me in the right frame of mind, but I felt good on Sunday.  I felt like I had a chance and felt like they had given me a great race car.  I haven’t been that confident in a long time.  I think beating Antron first round really helped that out.” 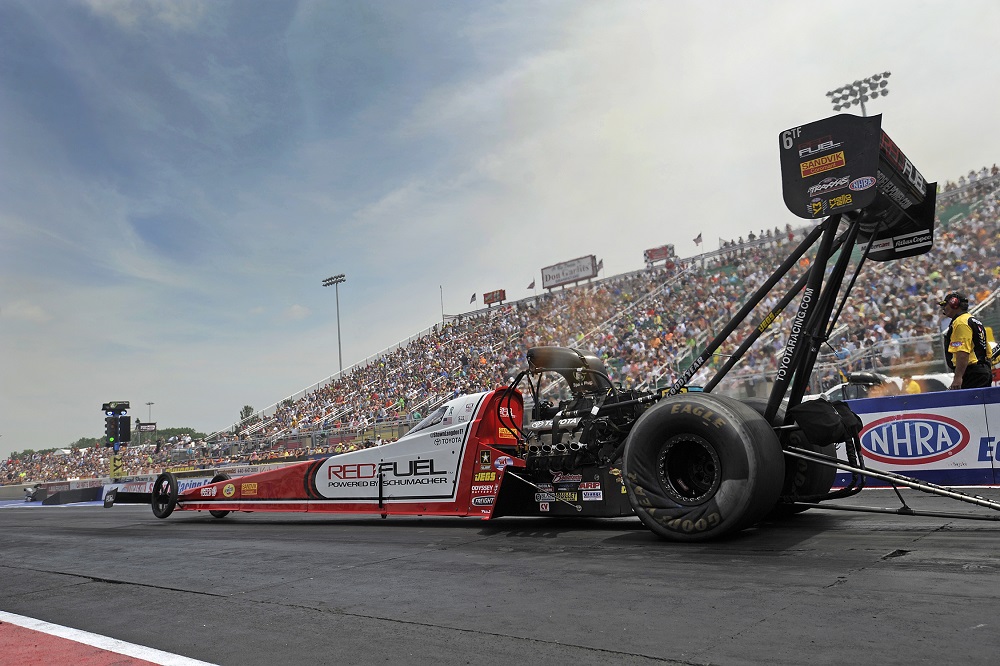 Regarding his current situation, after seeing a 3.67 from earlier this season, how much performance can he get from his DSR dragster? Reading is noted for its cooler weather, and with the abundance of oxygen from the surrounding greenery, more National Records have probably been set at Maple Grove than at any other track.

“Every year, we’re getting that little bit more data, information, better parts going into the car, better blowers, better clutches, Goodyear coming out with better tires just to show you the improvements,” said Langdon.  “There’s just all these things that have continually gotten better, and that’s why the car’s performances have not only gotten better, but more consistent.  Going to a track like Reading, the cool conditions, as we’ve seen in the past, makes Maple Grove one of those tracks that can hold a 3.60 without a problem.

“Yes, we definitely have to have an aggressive mentality going into the weekend. It’ll depend on how the weather conditions are and how many runs we get. Our main focus is to qualify for the race.  I think with the way all these cars are running, if we have conditions set up, I believe like Brainerd was, where it was nice, cool, cloudy with a cool track temp, I’m thinking you’re probably going to have to run a 3.60 something just to get in the top half, just in qualifying.

“It’s getting pretty brutal, pretty fast, as far as how quick all these cars are going.  In Brainerd the top five or six had to run a 3.69 or better.  There’s a couple of cars that didn’t get in at Brainerd that were very capable of doing it.  That’s what makes it fun.  To me, as a driver, I enjoy those races more because of not only the speed rush of adrenaline of doing it, but what comes out. Seeing all these quick and fast times, the big 330 mph, it gets you a little giddy inside where it’s very exciting.”

So what does Langdon expect to see out of the next four events for his team?

“It’s going to be a free-for-all, absolutely,” he said.  “I really feel like we have some of our best racing that I’ve ever seen, as far as how close all the drivers are with reaction time, and just one little mistake can cost you.

“That’s our biggest thing, is minimizing any mistakes at the last four races, and then capitalizing on any mistakes the other teams make.  It’s pretty brutal right now in our category.  As long as we do that and maintain the consistency that we have in our race car, I think we’ll be able to go into Las Vegas and Pomona having a fighting chance at the championship, but I don’t think this is going to be the year where you have a runaway winner.  I think it’s going to come down to Pomona.  I think it’s going to come down to a couple of drivers and a very exciting end to the season.”

Television coverage starts on Friday with the second round of qualifying LIVE on FS1 at 6:00 p.m. ET on Sept.30.  That’s followed by qualifying coverage at 2 a.m. on Sunday, with the Finals airing live on FS1 starting at 2 p.m. on Sunday, Oct. 2. 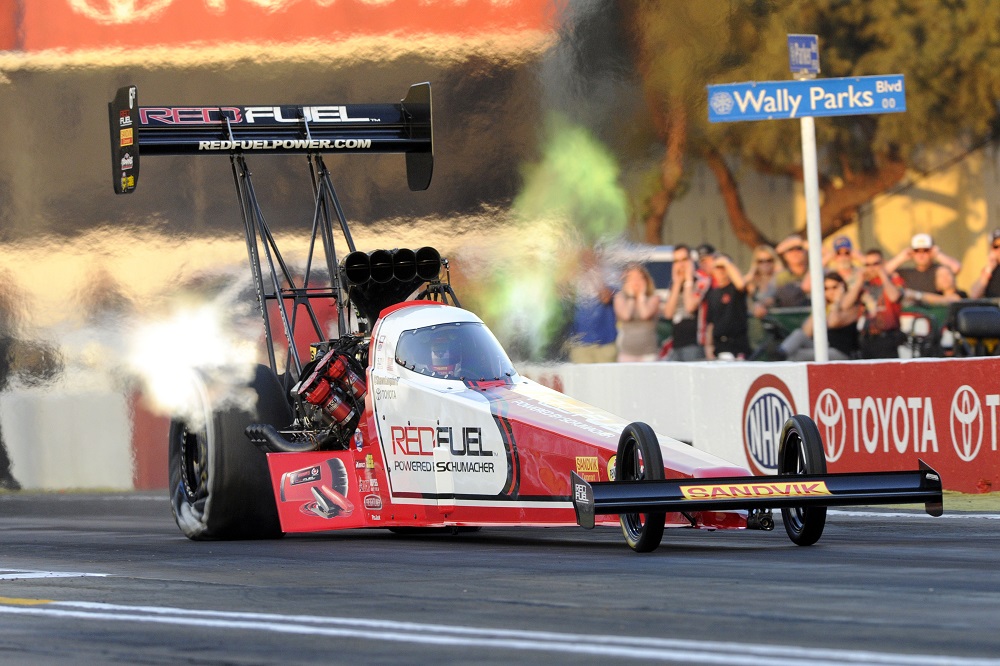