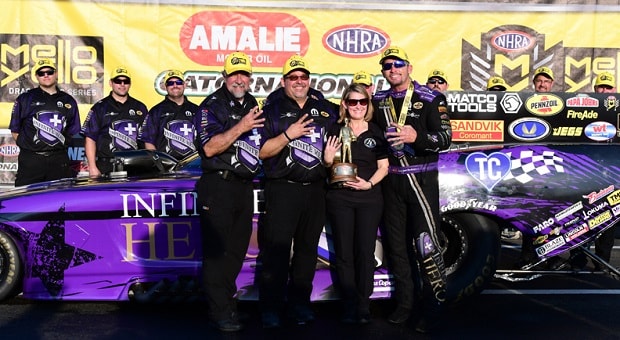 NHRA’s third race of the year was fraught with emotion. The 49th annual Amalie Oil NHRA Gatornationals took place over the St Patrick’s Day weekend and featured all of the Mello Yello professional categories, together with J&A Pro Mod and a slew of Lucas Oil Sportsman classes. It was also the start of this year’s Factory Stock Showdown class, featuring entries from Chevrolet, Dodge/Mopar and Ford.

While it was great to see Richie Crampton back in the Top Fuel winner’s circle with Kalitta Motorsports, along with sophomore Pro Stock standout Tanner Gray’s Chevrolet Camaro and Eddie Krawiec, reigning Pro Stock Motorcycle champion on his Vance & Hines Screamin’ Eagle V-Rod hoisting their Wally trophies, the exclamation point for this particular weekend was the Funny Car victory for Jack Beckman, who had the Dodge Charger R/T hot rod to beat throughout the race meeting.

Beckman, the 2012 Funny Car class champion, has had an up-and-somewhat-down career, seemingly always having to contend with rotating crew chiefs and crews. Still, the driver of Terry and Doug Chandler’s Don Schumacher Racing Infinite Hero Foundation Dodge Charger R/T has won races and been in the hunt for a Funny Car title most every single season the former Vietnam War combatant and cancer survivor has raced on Don Schumacher’s team.

For the past couple of years, Beckman’s hot rod has been tuned by veterans John Medlen, Dean “Guido” Antonelli and Neal Strausbaugh, who last year came over to the Funny Car side of Schumacher’s mega-team from the U.S. Army Top Fuel squad for eight-time champion Tony Schumacher. They appear to have gelled well as a team, particularly this year. 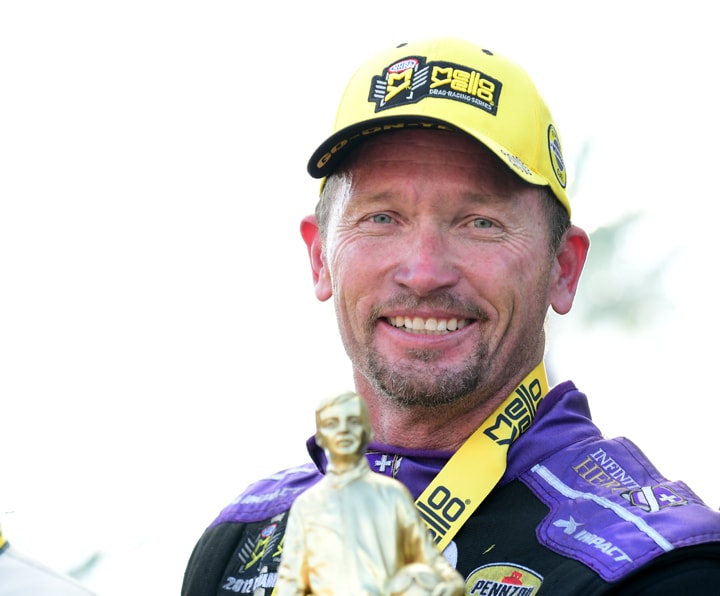 Gainesville will always be a tough race for Medlen and Antonelli, both formerly employed by John Force Racing (JFR). It was at this venue, 11 years ago, that Medlen’s son Eric, a championship-capable driver, had an accident in testing his JFR Mustang Funny Car the day after the race, a traditional time for nitro teams to test. Five days later John Medlen’s son and Dean Antonelli’s best friend was gone.

While it’s acknowledged that racing is a cruel sport, Eric Medlen’s 2007 death hit the NHRA community exceptionally hard. In fact, at Sonoma Raceway each year, the track holds an ice cream social in his honor, as the wine country dragstrip was the closest professional venue to the Medlen family home where Eric grew up attached to horsepower of a different type – he loved riding rodeo as well as racing cars.

Every year since that fateful day, John Medlen and Dean Antonelli have returned to Gainesville, Florida looking for, if not closure, at least some sort of satisfaction. This past weekend they found it as the DSR Infinite Hero trio tuned Beckman to eight runs down a very tricky track that had almost everyone scratching their heads as they battled heat, cool, wind – but thankfully no rain.

Beckman led qualifying to earn the pole sitter’s green hat and marched through the bracket, dealing with No. 16 qualifier Jim Campbell’s Toyota Camry, the Camry of former champ Del Worsham, Kalitta Motorsports’ Shawn Langdon and teammate/points leader Matt Hagan in an incredibly close final, which he nabbed by posting a better reaction time of .051 to Hagan’s .062 seconds. Hagan was quicker (4.034 to Beckman’s 4.035-sec) but the Californian beat the Virginia cattle farmer in speed, 323.58 to 322.04.

Close races like that are what make NHRA nitro competition so compelling. The fact that this was John Medlen’s and Dean Antonelli’s first Gainesville win since that fateful day in 2007 brought the entire NHRA community to tears of joy for all of them. Because Beckman finished fourth in 2017’s final standings, he uses the same number this year that Eric Medlen carried in his final races.

While Sunday’s results didn’t bring back Medlen’s son or Antonelli’s best friend, it did settle a score with the track. Those that loved Eric Medlen couldn’t have asked for more.