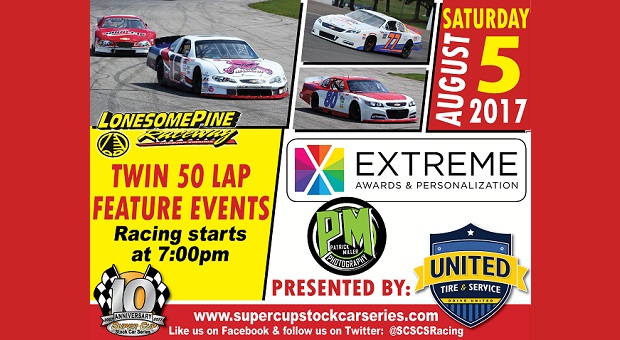 Last year’s event featured thrilling battles throughout the day. The first-time winner in his initial SCSCS start, Ben Ebeling, recalls the special night which he will always count as a career highlight.

“It was unbelievable just because of so many things,” the 36-year-old racer recapped. “Having my daughter there eight months after we adopted her for only the second race she was at and it was the first time my mom was present when I won a race. I wasn’t even sure if I’d be driving and we unloaded that thing and it was pretty good right off the truck.”

He hopes to repeat his performance this year. The Hickory, North Carolina resident was originally scheduled to appear in June as his 2017 debut, but a delay gave him some extra time to prepare a new car out of the Potter Racing stables.

“I set the bar really high,” Ebeling laughed. “We were 95 percent ready but it was great to take a step back and fine tune some more. There are a lot of unknowns again and this car hasn’t even turned a lap, but I have no doubts that it’s as good as anything out there. Hopefully we will be able to work on speed when we get to Lonesome Pine.”

Again, Ebeling will rely on two of his biggest influences for pointers, although one will not be present at the track. Jon Kerley, Ben’s instructor at the Catawba Valley Community College as part of their motorsports program roughly 15 years ago, provided the setup and advice Ebeling used to navigate the outside groove to his advantage last year. The winning ride from that night will be piloted by team owner and Johnson City, Tennessee native Mike Potter, who walked away from a frightening wreck last time out at Jennerstown Speedway Complex.

Potter is one of four drivers entered who first raced at Lonesome Pine over three decades ago. Brad Teague, former track champion and veteran of 241 career NASCAR Xfinity Series starts from 1982 to 2015 with a victory in 1987, will return from retirement to try for the win in a third Potter Racing machine.

Mike Kurkowski will make his first appearance of the season this weekend. He drove at Lonesome Pine during his rookie year in the former American Speed Association in 1983, earning a ninth place finish. Bob Schacht may be looking for redemption after being credited with a runner-up finish in an ARCA race that same year – a race which which the Mooresville, North Carolina driver believes he should have won.

As far as those in the running for the overall championship go, current leader Jim Crabtree Jr. set fast time, led laps, and finished top five in his only previous SCSCS start at Lonesome Pine Raceway back in 2008. Kevin Kromer has his sights set on narrowing the point deficit after an ARCA Racing Series debut at Pocono Raceway last weekend. The Walnutport, Penn. racer missed the 2016 event after a successful series of cancer treatments, but competed at the southwest Virginia track four times, from 2008 through 2010, with a best finish of third. The team owner for whom he drove, Brian Kaltreider, will return to the series at the site of his best run in 2016.

The battle for the southern division title will also begin with this weekend’s two races.  J.P. Crabtree III tops those eligible in the overall standings. Brent Nelson is fresh off an evening sweep at Jennerstown and was quick at Lonesome Pine a year ago before gremlins under the hood sidelined him.  Larry Wilcox could have something for his fellow counterparts; he’s recorded two top five finishes in the past at LPR. The Harrison family, Harvey and his two sons Brian and Brandon, will doubtless put forth an impressive effort, as always. Harvey set fast time a year ago and has never finished further back than fourth in five past LPR starts.

J.P. Crabtree’s teammate Trent Gossar will bring back the same car in which he finished runner-up a year ago after his Don Gnat Racing primary car sustained heavy damage. Bill Ashton, Jason Schue, Ron Langdon and a host of others hope to improve on their past series results with two chances to do so.

The Sopwith Motorsports Television Productions crew will be on hand once again filming the full Super Cup Stock Car Series season and producing nationally televised broadcasts scheduled to be shown on MAVTV at a later date to be announced. For more information please visit the official web site at www.supercupstockcarseries.com. Interactive updates throughout race day will be available on the Super Cup Stock Car Series Facebook and Twitter.