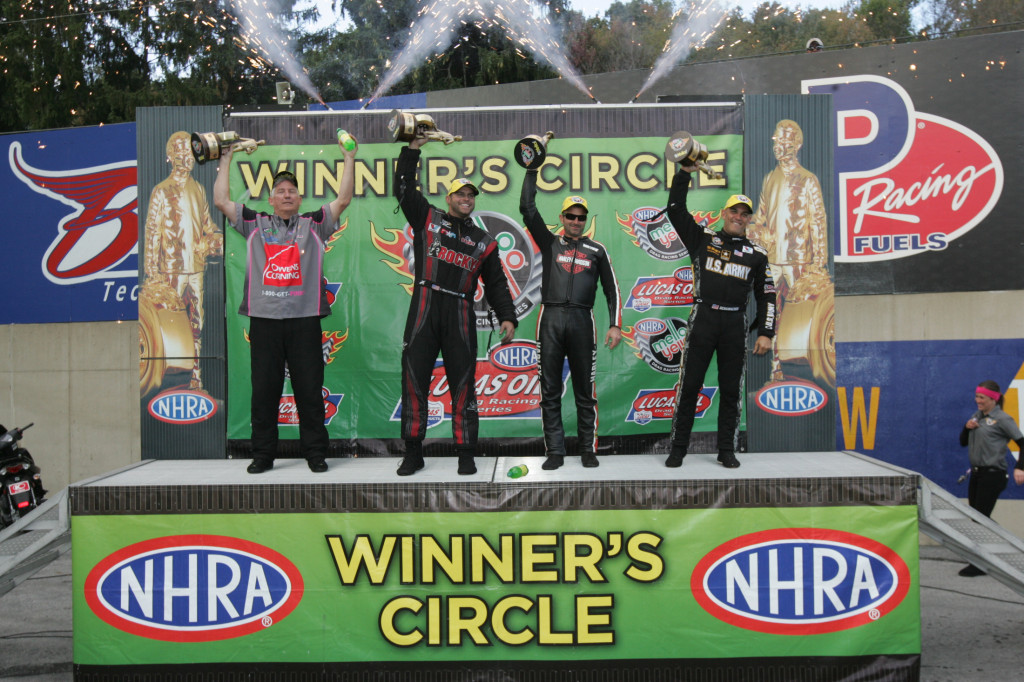 Cooler than normal conditions at the Maple Grove Raceway still proved hot for Tony ‘The Sarge’ Schumacher as he more or less slammed the door on the rest of the Countdown Top Fuel field by winning Sunday’s NHRA Nationals.  Funny Car’s Matt Hagan is the new points leader of the class, passing both John and Courtney Force in eliminations.  Roger Brogdon got to play Pro Stock spoiler taking that division title and Eddie Krawiec kept his Harley-Davidson Pro Stock Motorcycle running quick and true as he and Andrew Hines pulled away from the pack in the NHRA Countdown points chase. 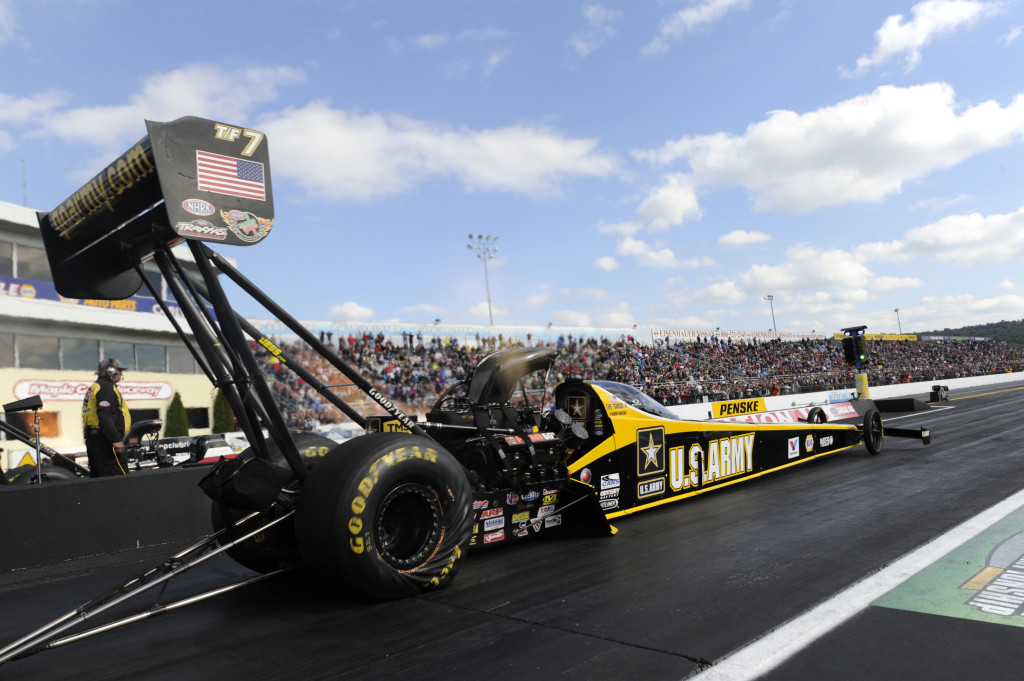 Tony Schumacher continues  his legendary career as Top Fuel’s most prolific driver by winning his 77th NHRA National event, his fifth of the 2014 season, third of the Countdown and 700th round of his career, while denying Brittany Force her first win in the final round.

“We have a great race car with the U.S. Army team, but we know there are a lot of great race cars out here,” said Schumacher, who is looking to win his first title since 2009.  “I’m happiest for the fans, because they are getting to see a great show every week. We’re just living the dream.  We have three wins in the Countdown with two more races coming up, so that gives us a shot at winning five.  We don’t want to leave anything on the table.  I can’t tell you how blessed we feel, to get through the rounds we did today starting with Bob Vandergriff.  Steve Torrence gave us everything we could handle and those match-ups with Doug Kalitta are always presser packed.  Winning that semifinal may have been the biggest round win we’ve had in a long time.  Coming up against Brittany in the final, I knew we were going to be challenged.”

The run to victory has enabled Schumacher to build on his lead in the championship standings.  He started the weekend with a 57-point advantage and will carry a 134-point lead to Las Vegas in three weeks, which equates to six and half rounds of racing with only eight remaining for the season.

Before the Top Fuel final, Schumacher had to patiently pass the time for the NHRA Safety Safari to clean up fellow Don Schumacher Racing teammate Matt Hagan’s oil  left on the track from Hagan’s Funny Car final round.

“We had that clean up and had to wait 15 minutes, so we got out of the car and I tell you that is a difficult thing to do,” Schumacher said.  “You are in the car you’re machine-like, doing your practice and then all of sudden bam you’ve got 15 minutes to wait.  That’s a tough deal, you’ve just got too much to think about and when I got back in the car obviously I didn’t have a great light (.073 seconds).  You try to get back into your mode and be ready, but I’m telling you it’s not an easy thing to do.  Then the car went out there shakes loose and as soon as that happened I thought no, no, no…luckily I don’t have the give up attitude.  Some drivers might have just said ‘well, Brittany is going to beat us,’ but I pedaled it twice and finally got it to hook up.  It was a great time to get a win like that.  We have been going through some adversity the last couple of years.  We were working on a six-disc clutch and that was very difficult.  There were a lot people wanting us to make changes, but we stuck with it.  We knew what our goal was and we fought through it, and I think it’s a great lesson for all the kids out there. Everything is not easy.  Seventy seven trophies are sitting back at our race shop, but I’ve been in hundreds of races and lost quite a few.  Getting through the difficult times is what drives us to get to these moments.”

Schumacher defeated Brittany Force in his 130th career final appearance by staying calm when the U.S. Army dragster lost traction early in his pass.  The seven-time champion back pedaled to get down the track in 4.440 seconds at 291.13 mph to secure his record-setting 77th Top Fuel win.  Brittany Force had the same loss of traction problem and recorded a time of 4.652 seconds in her fourth career final round appearance.

Now the magic number that Schumacher wants to see is 151, the number of points he wants to have after the Las Vegas event and if that happens, he will be crowned champion.  Trailing Schumacher are Doug Kalitta–134; Steve Torrence–143; and Shawn Langdon–148 with Las Vegas on the horizon. 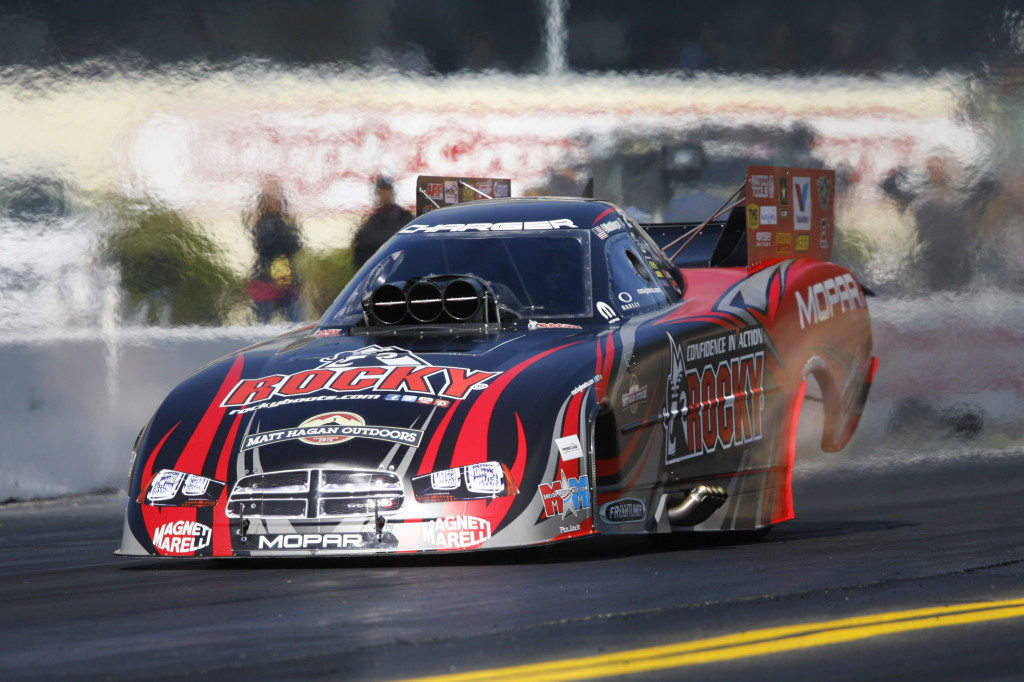 Matt Hagan drove his Rocky Boots Dodge Charger Funny Car to a 36-points lead, winning his third fuel coupe race of the year and 13th overall by taking out DSR teammate, Tommy Johnson, Jr. in the finals at Maple Grove Raceway. But it didn’t come easy for the farmer from Christiansburg, Va.

Hagan’s day began with a solo run in the opening round of eliminations after Tony Pedregon broke, followed by challenging his DSR teammate, Jack Beckman, in the quarterfinals, a determined Alexis DeJoria in the semi-finals on a hole shot and in the finals against Johnson, Jr.

“We’ve been confident, for sure but we looked at the (eliminations) ladder and it looked good for us, the car has been running good and Dickie (Venerables, crew chief) has been doing a great job,” Matt said.  “This guy, you can see it in his eyes.  He’s not faltering under the pressure, he’s making great calls and I’m just driving the car and trying not to mess it up.

Matt’s engine let go in a fireball during the final round but he was able to hang on for the win against Johnson Jr., who lost traction early.  After running a string of 4.0s in eliminations, he won with a time of 4.333 seconds at speed of 215.00 mph.

“I don’t know what happened in the final, probably a part broke,” he said.  “It just went kaboom and it’s such a crazy feeling.  You look over, and you’re on fire, and TJ wasn’t there and you’re just waiting on it to get to the finish line before you hit the brakes and pull the fire bottles.  It catches you off guard a little bit because you’re so focused on the groove and leaving the starting line.  It is just a wild way to win. That’s probably the wildest way I’ve ever won out here on the NHRA circuit.”

Now Hagan enters the Toyota Nationals on The Strip at the Las Vegas Motor Speedway on November 2 with a 36-point (2 rounds) lead over 16-time Funny Car champ, John Force and a 72-point lead over Courtney Force and appears to be a 2 man, one woman race to the title.

“Getting the points lead is huge but we showed up here to win a race,” said the 2011 Funny Car champion  “The points lead can change but these Wally’s don’t so we did what we set out to do this morning and that was turn on four win lights.  My guys did a great job.  They have the consistency, the desire.  Dickie, you can tell that he’s confident in himself.” 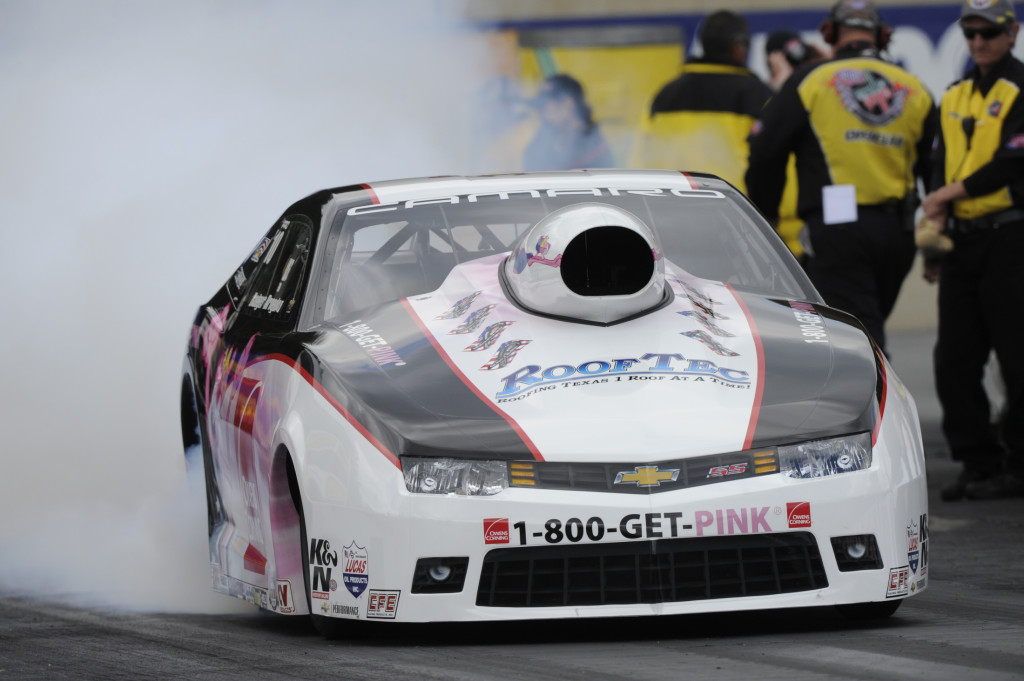 After a very tough 2014 Pro Stock season, driver, Roger Brogdon decided mid season to make major changes in the makeup of his team and brought out a new car at Indy.  Changes this late in the season mean big risks, but for second time in his career Brogdon ended his race day at Reading, Pa., hoisting a Wally at the NHRA Nationals.

“Partnering with Owns Corning and the support of Richard Freeman’s Elite Motorsports horsepower has made the difference,” said the businessman, Brogdon.  “I knew we had the power to get it done today and here we are.  This wouldn’t be possible without all my guys, every single one of them.  They’ve put a lot of effort into this car even when the results weren’t where we wanted them.”

Outlasting a tight Pro Stock field, he drove his Camaro turning on the win lights four times Sunday with the first coming against Richie Stevens Jr. in the first round

Taking on the Pro Stock points leader, Jason Line in the second round, Brogdon’s Camaro made one of its best runs of the weekend, a 6.505 second pass, and pulled out to an early lead when Line’s car stumbled at the halfway mark.

The semifinal round had Brogdon’s Camaro paired up with Greg Anderson’s Camaro.  But when Anderson’s engine broke on the burnout, Brogdon was able to make a free pass into the final round, his first of the year.

With no sign of letting up in the finals, Brogdon was ready on the Tree for Allen Johnson’s .025 reaction time with his own .030 light.  However, his Camaro had smooth sailing to the winner’s circle with a pass of 6.516 seconds at 212.13 mph when Johnson’s car slowed early on its pass to 10.270 seconds.

“It doesn’t get much better than your first win, but this one definitely means a lot,” Brogdon said. “This team has been through a lot of issues this year and this makes it all worthwhile.

“I’ll be honest; there were some moments when I questioned what I was doing.  This racing thing isn’t easy by any means.  It’s a close Pro Stock field but that just shows that our team can run with the best of them.”

Jason Line goes into the Toyota Nationals with a 35-point lead (2 rounds) over Erica Enders-Stevens, who had low elapsed time of the Reading race at 4.465 seconds, 51 away from Dave Connolly and 81 from Shane Gray. 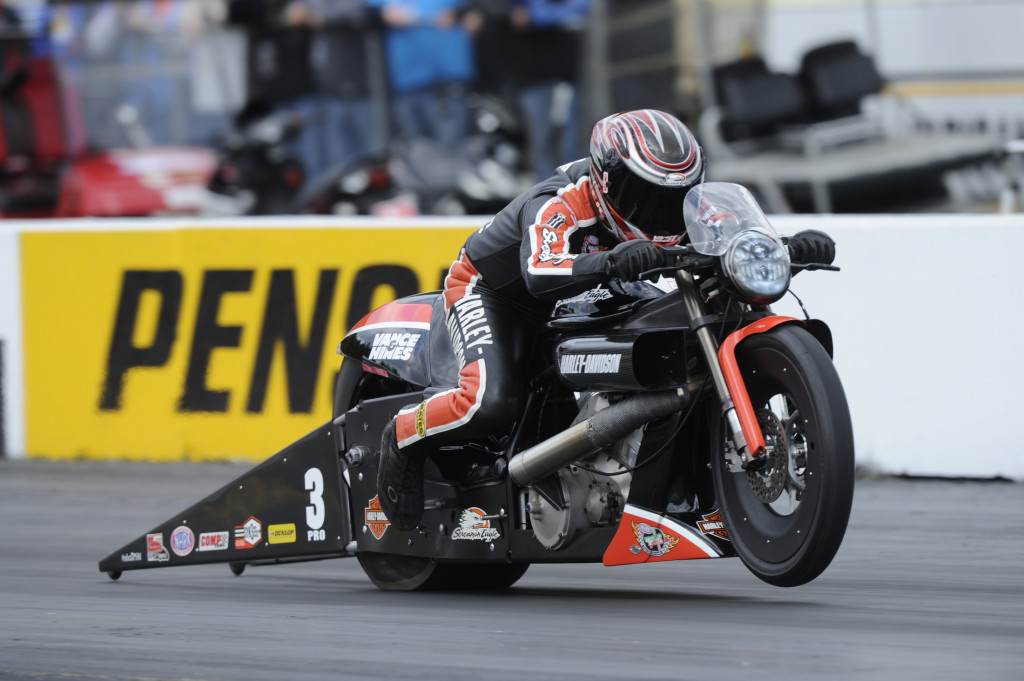 In Pro Stock Motorcycle, Eddie Krawiec picked up his fourth win of 2014 with a 6.793 at 197.13 on the Screamin’ Eagle Vance & Hines Harley-Davidson, beating Scotty Pollacheck.  It was Krawiec’s 27th career victory and third at Maple Grove Raceway.  He cut teammate Andrew Hines’ points lead to 25.

“We were joking around that it looks like it’s going to come down to a two hog (Harley) race instead of a two horse race,” said Krawiec, who beat Shawn Gann, Adam Arana and defending world champ Matt Smith en route to the final.  “I knew that this was an important day for me personally.  If I wanted to stay in championship contention I have to make sure I can make up every round.”

Pollacheck was 0-4 in previous final round appearances and was trying to reverse that trend aboard his Buell.  Despite the loss, the Matt Smith Racing driver moved to sixth in points and is within striking distance of fourth place Steve Johnson and fifth place Smith.

The NHRA Mello Yello Countdown to the Championship playoffs continues Oct. 30-Nov. 2 with the NHRA Toyota Nationals at The Strip at Las Vegas Motor Speedway.