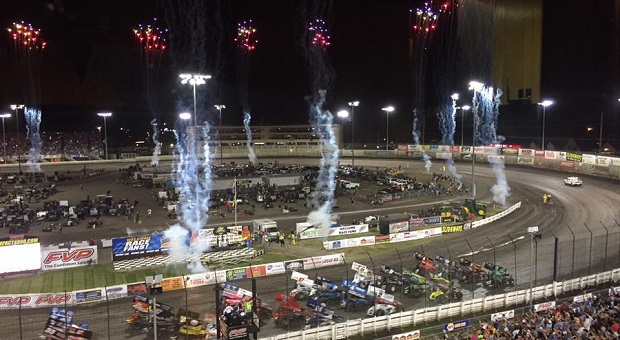 After an excellent qualifying night, David Gravel quickly established significant advantage over fellow front-row starter Donny Schatz. Gravel set a grueling pace; Schatz pulled ahead of him on the 12th circuit, but Gravel took back his place at the line. He stretched his lead out before disaster struck on lap 22, and the Watertown, CT driver lost power in his CJB Motorsports No. 5.

“Something let go on the backstretch and then something let go in turn three and four,” a disappointed Gravel said following the race. “We have a fast car. We’re going to come back, win some races and kick some ass.”

Kerry Madsen slid into second and tried for the lead with a massive slide job in turn one to no avail. Schatz, Madsen and Larson attacked the cushion before Terry McCarl brought out a caution with 24 laps in the book. The yellow flag turned red, indicating the mandatory fuel stop for the teams.

Following the red, Larson slipped by Madsen while Schatz extended his lead and fought through heavy traffic. “I knew I needed to push the issue. It got pretty hairy a couple of times. The race track had a pretty tricky lip,” Schatz recalled. 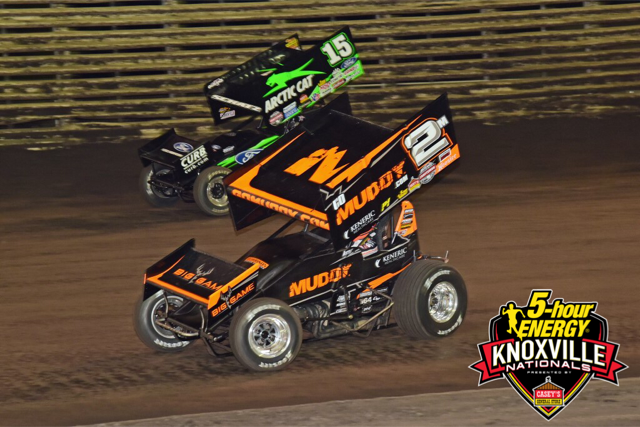 Schatz and Larson flirted with danger for multiple laps before Larson took his shot in traffic. On the last circuit, Larson tried a bonsai slide job to no avail; he had the best view watching the Tony Stewart Racing No. 15 cross the finish line first.

“I’m thankful I was able to run tonight. I can’t think Chip [Ganassi] enough. The months leading up to this event I thought I was going to be able to race Wednesday and that’s it,” Larson said in the post-race press conference.

For Schatz, this was the 10th Knoxville Nationals Championship in the last 12 years. “It’s been a hell of a streak. All the second places I had before I finally won changed the whole dynamic and view of this place for me. I’m fortunate enough to be able to work with the same people for such a long amount of time,” a pleased Schatz said.

Donny Schatz will go for his 11th 5-Hour ENERGY Knoxville Nationals title at the same time and place next year. Up next for the World of Outlaws Craftsman Sprint Car Series is a trip to North Dakota for a three-race weekend starting Friday at the River Cities Speedway. 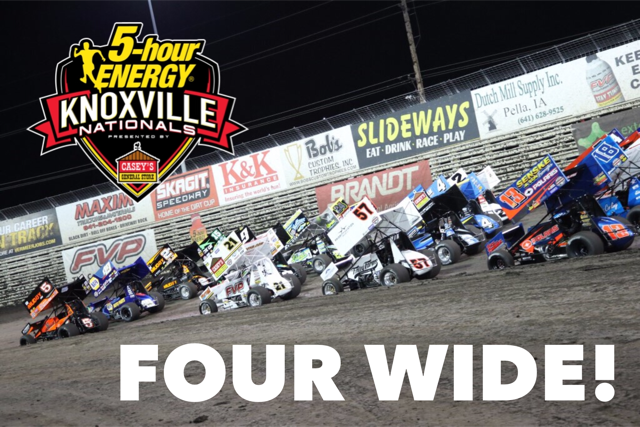