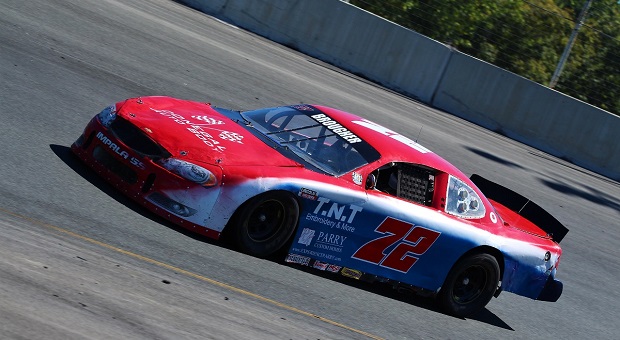 For the first time ever, the Super Cup Stock Car Series visited Dominion Raceway and Entertainment complex for a very memorable show.

Throughout the afternoon, Bob Schacht proved himself a major player, fastest on practice runs and eventually winning the Pole Award with his time of 15.882 seconds. Meanwhile, Jerod Brougher made the six-car redraw for the first time in his career and subsequently led the 15-car field to green.

As the race began, Schacht sped toward the front from his fourth starting position, but encountered competition in outside pole starter Ben Ebeling. Ebeling grabbed the top spot and led for multiple circuits, but as the halfway point drew nearer, so did Schacht. As the drivers emerged from turn two, Schacht was in the lead.

A yellow flag on lap 40 for Craig Wood caused the field to bunch up. When the race resumed, Schacht drifted exceptionally high on the front stretch, pushing Ebeling toward the wall and letting Kevin Kromer move below both to take the lead.

“First and foremost, I have to apologize to the 44 car,” Schacht explained after the race. “He started on the outside of me and when I grabbed fourth gear that thing just jumped sideways. I don’t know why, but it beat him and me up pretty good there.”

After a red flag for an extreme impact by first-year SCSCS driver Ron Langdon, Schacht and Ebeling regained their drive. Langdon, fortunately, was alright after his crash. Schacht took back the lead on lap 47, and on the next lap, Ebeling caught Kromer got tangled, sending Kromer spinning in turn two. 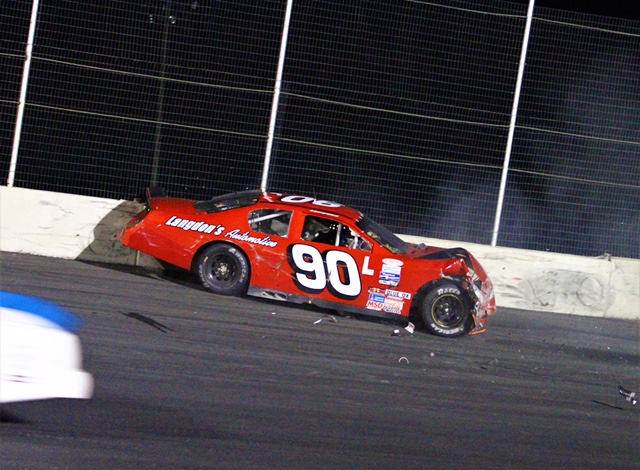 With those two contenders sent to the back of the field, Brent Nelson took the chance for a shot at Schacht. While he managed to draw even with the No. 75 for the opening lap of the final green flag run, Schacht ultimately triumphed to claim his first SCSCS checkers.

“I haven’t won a race since 1998 at Memphis so this is big for us,” Schacht said. “To come back after 15 years and not driving at all, kind of wanting to play a little bit, found you guys here in the Super Cup deal with (Director of Competition) Joe Schmaling. This is just a fun group to race.” 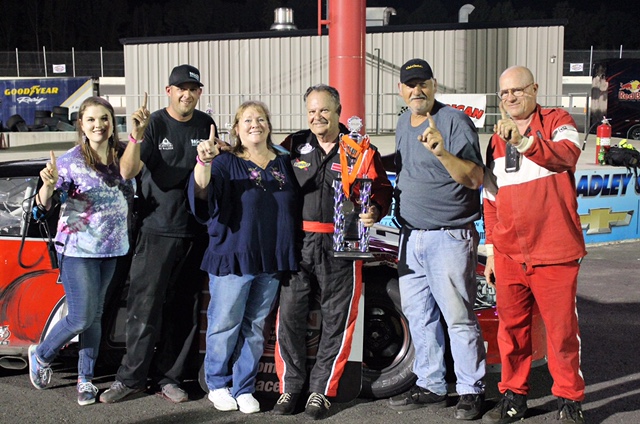 Nelson was satisfied despite missing out on first place; he’d been looking forward to this event for some months.

“Bob’s just a good driver and would come off the corner with a lot of straightaway speed,” the driver of the No. 80 Airtek Inc. / Precision Auto Collision Chevrolet noted.  “I could hang with him going through the corners, but down the straightaway he was a rocket ship.”

Veteran racer Mike Potter took an understated third, his best result to date, without even a speck of damage on his self-owned No. 12 Chevrolet.

Kromer managed to claim the fourth place finish, leaving fifth for Ebeling. The two drivers disagreed about what had happened earlier on.

“He just drove in underneath me and turned me right around,” Kromer said.  “It was just one of them deals.  We got put to the back and just drove it for all it was worth.”

Despite losing the lead, Kromer was still glad to be at the track and have the opportunity to race on his one-year anniversary of being cancer free.

“When I got the lead I knew Bob was fast and my only game plan I had was to make him go around the outside, but unfortunately he got a good run off of four on me, got his nose under me, and my spotter said he was there,” the Walnutport, Pennsylvania veteran, driving his son Kyle’s No. 52 for the weekend, said.  “We won, regardless, today.”

“I’m going to fault myself at first because I overdrove the one corner and got a little bit of marbles on the car and we slid up and opened the door for the 75,” Ebeling recalled from the lead change around the halfway point.  “We should have never been in that position. I tried to stay off of (Kromer), but I was up to his door and the way I’ve always raced is if I’m underneath you and under your door that’s my spot. I’d like a little bit of room, just give me a car width, 65 inches or whatever it is wide, and that’s all I want. I really felt like we had a car to win; just disappointing to come home with a tore up race car.”

Jerod Brougher battled overheating issues to return to the lead lap and finish in seventh during the main event, granting him in a third place starting position for the 25-lap Extreme Awards and Personalization Trophy Dash which followed, meant for competitors who have yet to win in the Super Cup Stock Car Series.

The pole starter, Potter, dashed to the front in the first lap, but by the end of the first circuit Tim Richardson and Brougher had replaced him in a fight for first.  A few laps later, Brougher took the lead on the outside and began lengthening the margin, but an interesting final lap set up a last ditch effort for Richardson coming to the checkers.

“Tim and I had a really good race at the beginning and had a good side by side battle,” Brougher recapped.  “We were pretty even.  I started pulling away from him, but on the last lap I got pinched up in the wall by a lapped car and the 90 was able to catch up to us.  He almost passed us coming out of four, but we were able to hold him off.” 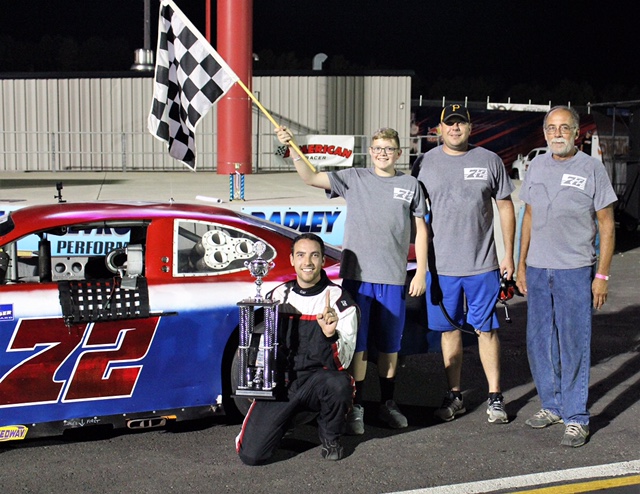 The 30-year-old driver of the No. 72 Donegal Auto Body/Parry Custom Homes Chevrolet saw his hard work put into completing his first season pay off after a debut that started sluggishly due to issues largely not of his own doing.

“You’re going to have to pinch me later because it doesn’t seem possible,” an elated Brougher remarked.  “For this little team of mine to do this – I built this engine two years ago for my Street Stock. I did nothing to it, except change the carburetor to bring it here.  Joe (Schmaling)’s not kidding. Whenever you can take a Street Stock motor and compete with these guys that have the high RPM or high dollar motors, it’s real.”

The variety taking place in the 10th Anniversary season demonstrates an exceptional record of nine different winners in 10 races held.  Many of those already triumphant competitors and a number more searching for their first victory of 2017 will receive two last chances when the Super Cup Stock Car Series makes their initial visit to Highland Rim Speedway outside of Nashville, Tennessee on Saturday, October 14 for Twin 50-lap special events.

Please visit the official web site at www.supercupstockcarseries.com and Facebook or Twitter accounts for more information regarding the Dominion Raceway Inaugural SCSCS Race presented by Avatar Instruments and upcoming events remaining in 2017 and being planned for 2018.