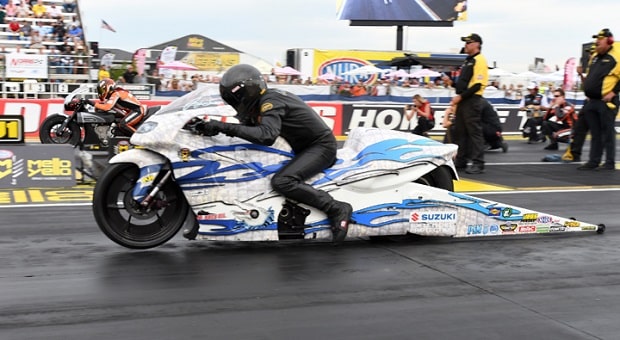 Even before he took one trip down the Lucas Oil Raceway quarter-mile dragstrip last Friday afternoon, Jerry Savoie, NHRA’s 2016 Pro Stock Motorcycle champion didn’t think the Chevrolet Performance U.S. Nationals win would be his to claim.

After all, the Vance & Hines Harley-Davidson Screamin’ Eagle FXDR motorcycles were racing on their home turf, the EBR Buells had been running exceptionally well and there just weren’t that many opportunities for Suzuki riders to claim the win.

By late Monday afternoon, that view had changed as Savoie pulled, with tears in his eyes, into the top end’s Winner’s Circle, having defeated five-time champion Andrew Hines and his Harley-Davidson, after Hines fouled at the start line in anticipation of the tree. 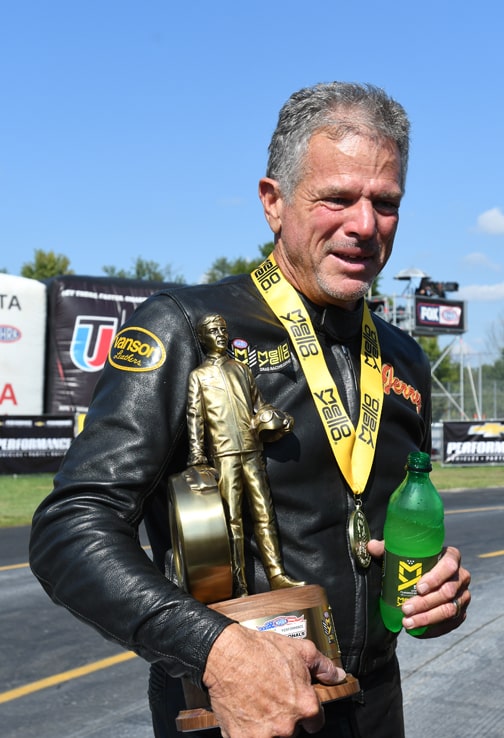 It wasn’t easy getting to the finals, as Savoie qualified eighth. He wasn’t even the quickest Suzuki on the grounds – teammate Karen Stoffer qualified seventh as top runner for the brand. There were a total of seven Suzuki riders vying for the 16 elimination slots on Monday; two of them didn’t make the cut.

Savoie picked off Ryan Oehler’s EBR despite the latter’s better reaction time in the first round. He won a second tight contest against Joey Gladstone’s EBR in the quarterfinals. He dispatched the Harley-Davidson FXDR of Eddie Krawiec in a third tight race in the semifinals.

Disregarding Hines’ foul in the finals, Savoie had to overcome the better starts of all his opponents – and the native deficiencies of his machinery (Suzukis are old and haven’t been upgraded in a long, long time) – just to move on from each round.

Now Jerry Savoie is seeded fifth (he came to Indy in 10th place) for the six-race Countdown to the Championship that begins at Maple Grove Raceway outside Reading, Pa. in another week.

“The Suzukis have been struggling but we’ve been working and it paid off,” Savoie stated. “I held my composure [at the start line] and we were able to make some good runs. When Andrew throws up a red light, you better thank God for it, because that doesn’t happen very often.

“I didn’t know if I would ever win another one. It’s not easy, but we’re going to go for it and see what happens.” Not every 60-year-old gets the chance to race for a championship, much less a second one, three years after the first. 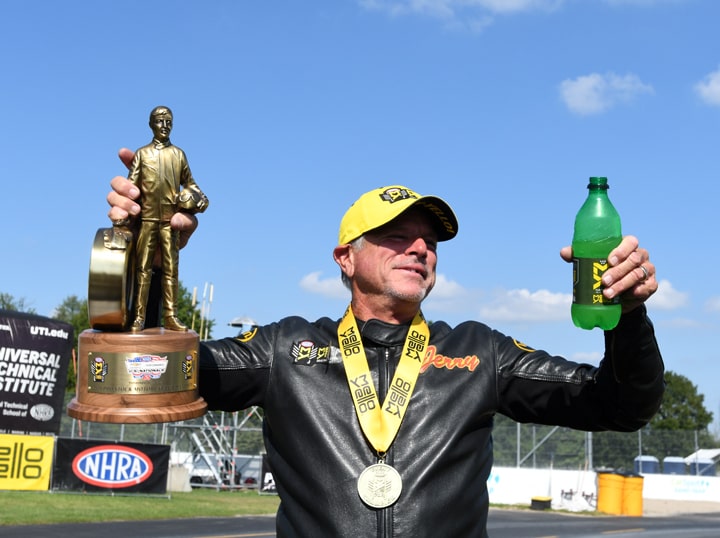 He may have missed a few of the “regular season” races in his chosen category leading up to the Countdown, but Jerry Savoie is on board and pumped to try and take another champion’s Wally away from guys at least 20 years younger than he is. Chalk one up for the old guys.