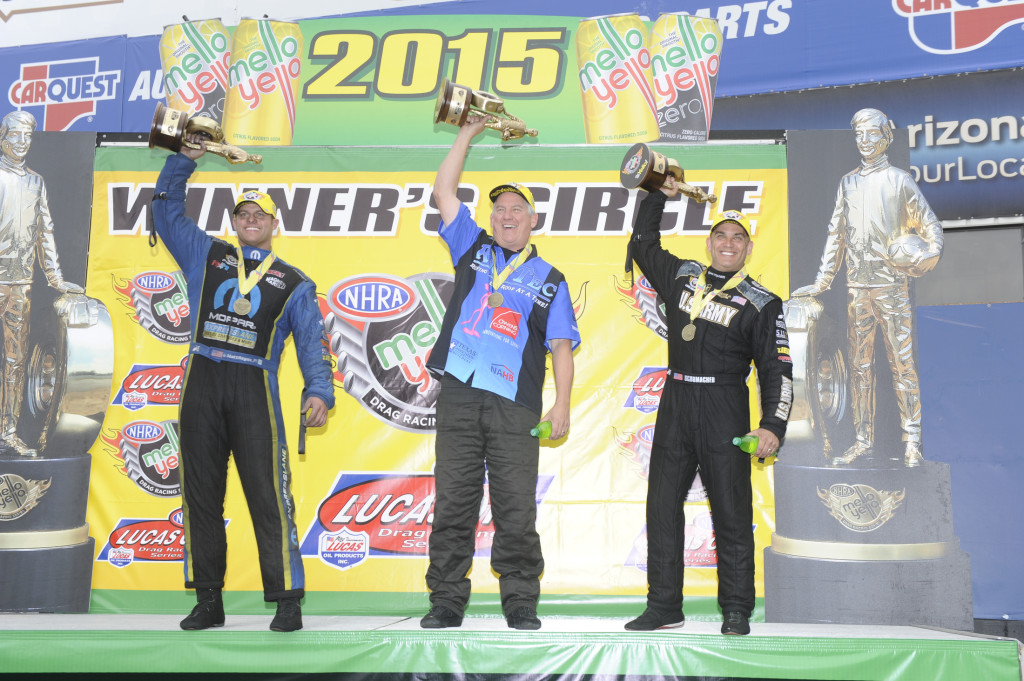 The charge of ‘The Sarge’ takes Phoenix; Hagan undefeated

Tony Schumacher and his U.S. Army Top Fuel team charged to the front of the pack at the CARQUEST Auto Parts NHRA Nationals in the Valley of the Sun to capture win.  His Don Schumacher Racing Funny Car teammate, Matt Hagan, dominated his category, remaining undefeated  in 2015 and surprise Pro Stock winner Roger Brogdon had a smile as big as his native Texas in Sunday’s winner’s circle after learning he was the new point leader.

Tony “The Sarge” Schumacher talked all weekend about how his nine-man U.S. Army team continued to give him an incredible U.S. Army Dragster.  After earning his 78th career Top Fuel victory and first of 2015, the eight-time and reigning NHRA Mello Yello Series Top Fuel world champion was emphatic that they were the reason he was triumphant in the CARQUEST Auto Parts NHRA Nationals at Wild Horse Pass Motorsports Park near Phoenix. 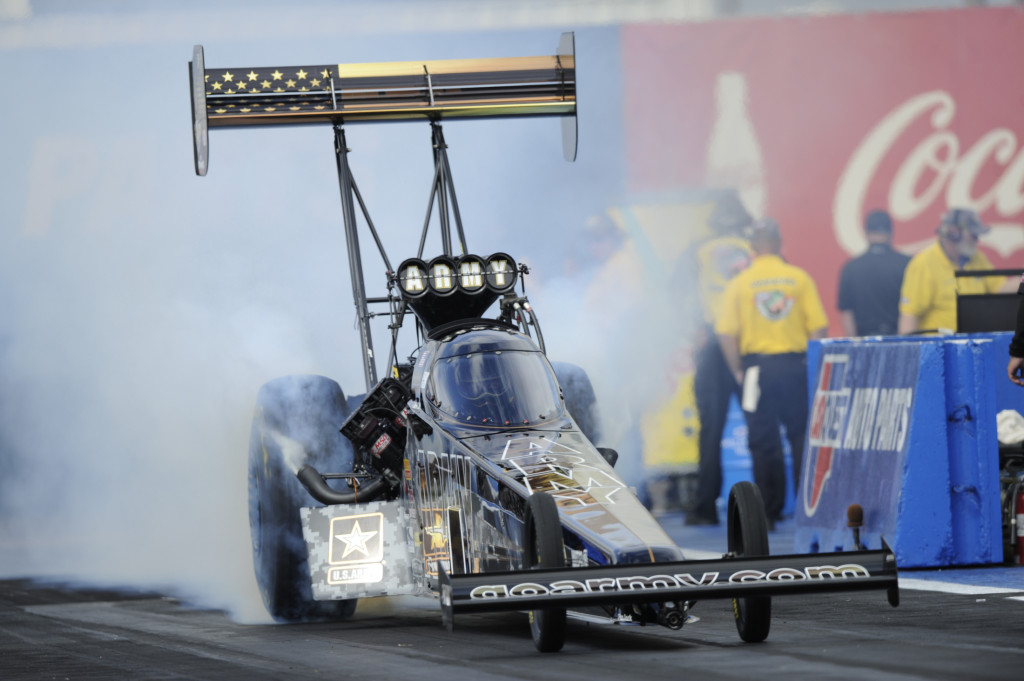 The Don Schumacher Racing crew paid huge dividends helping Schumacher establish a new career-best elapse time both during qualifying Friday and then on Sunday resetting it three times with his best being 3.720 seconds in the final versus Doug Kalitta.

“I have to give the trophy, the credit, every bit of it to my U.S. Army team this weekend,” said Schumacher following his fifth Phoenix win.  “I was off.  My lights were slower than they’ve been.  No matter what I tried to do I couldn’t fix it.  (Crew chief) Mike (Green) and (assistant crew chief) Neal (Strausbaugh) and all the U.S. Army guys dug deep and said we can fight through this.  They told me to just do my best.  They gave me so much confidence by giving me an incredibly fast car, and we went out and won this thing.  It was a great run through the ladder. We started with Jenna (Haddock), who has one of my old cars that she beat me with last year in Denver, and to win that round was fun.  After that, we face my DSR teammates (Spencer Massey and Antron Brown) in consecutive rounds and then beat Kalitta in the final.  What can I say?  It was a huge day for this team and that’s why this trophy is going on Mike Green’s desk.  Those guys were tremendous from start to finish, and they deserve this victory.”

Schumacher entered eliminations as the number one qualifier for the 77th time in his career.  He was machine-like in four qualifying runs including Friday night’s pass of 3.722, the quickest run of his illustrious career at that time.  That continued Sunday as he dispatched Jenna Haddock with a pass of 3.725 seconds, before knocking out DSR teammates Spencer Massey and Antron Brown.  The victory over Brown set up his 15th final round matchup with Kalitta.  Schumacher made it 10 consecutive final round victories over Kalitta with his run of 3.720 seconds at 326.56 mph.

“We’ve had so many good races with Doug over the years,” continued Schumacher, the No. 1 Top Fuel qualifier in Phoenix, who improved to 44-30 all-time versus Kalitta.  “It’s hard to beat anyone three times in a row, let alone 10.  Today, it was a matter of the team behind me.  They were incredible and I just didn’t want to explain why I didn’t get the job done.  Fortunately, I didn’t have to.  I’m not going to go home and put the trophy on my shelf and feel fulfilled.  It should go to Mike’s house, and he should feel fulfilled.”

Matt Hagan is off to his best start of the season since his NHRA Funny Car career began in 2008, taking the title at Pomona two weeks ago and continuing his winning streak Sunday in Phoenix. 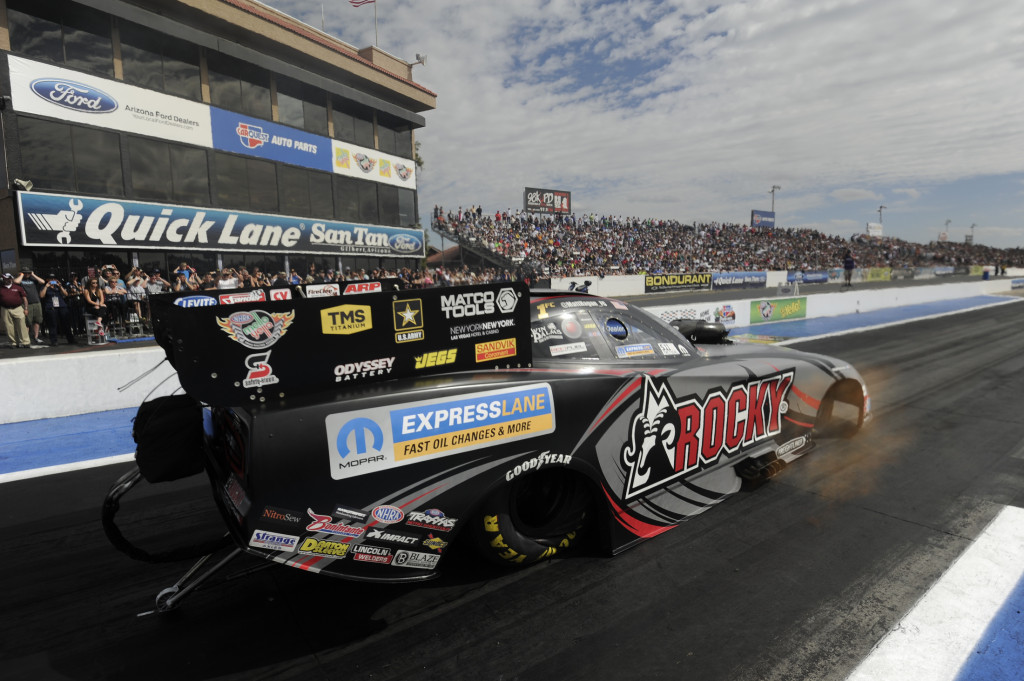 The team, led by crew chief Dickie Venables, clocked the lowest elapsed time of the weekend with a 3.975-second lap at 324.83 mph, the fifth quickest elapsed time and second fastest speed recorded by a Funny Car in NHRA competition, in the final round of Sunday to defeat Del Worsham’s 4.010 elapsed time.

“That shows why we are champions,” said Hagan, the reigning and two-time world Funny Car champion.  “Dickie Venables has done a helluva of a job with this Funny Car and he just continues to prove why he is one of the baddest crew chiefs out there.  The guy has a great hot rod underneath me and I’m just trying not to mess it up.”

Matt’s runs in eliminations ranged from his best in the final round 3.975-second lap to a 4.072-second lap, the slowest of his weekend in the opening round.  That adds to his impressive array of qualifying laps ranging from 3.978 to 4.051.

“We continue to turn win lights on,” he said.  “It’s two wins in a row this year but if you go back to Pomona it’s really three wins in a row.  We are world champions because we have such a great team.

“It has been really good lately.  The cream rises to the top and right now we are at the top.  It comes down to this group of guys.  These guys are the ones that make it happen.  I just try not to mess it up out there.  The biggest thing that we can do is just to continue to do what we’ve been doing.  We don’t change a lot.”

Venables was seen giving a sigh of relief on the starting line after the Phoenix final round instead of a standard fist pump or high five.

“We put the same tune-up that we had in it for the final qualifying session on Saturday but you never know if the car is going to perform the same,” Venables said.  “It did, and it was a relief.  We’re off to a great start and I couldn’t be happier.”

Hagan preceded by winning his second NHRA title of the season and 16th of his career to remain unbeaten through two events this year and has won the past three events with a 12-0 in eliminations record including last year’s NHRA Finals.

“It keeps getting tougher each year and every car is so competitive,” Hagan continued.  “That’s what’s so cool about this sport, it’s tough, but when you win you feel like you really did something.  I am just glad to keep this streak going.”

It was the second time Brogdon has beaten his Houston neighbor in the final round of a national event but the first time since Enders-Stevens won the Pro Stock world title last year.  Both racers are powered by Elite Performance engines, the main sponsor of Enders-Stevens’ team.

“We’ve both got fast race cars and it was an exciting race,” said Brogdon, who moved into the points lead with the win.  “That’s such a great group over there at Elite, and Erica is the champion and we’re all very proud of her.  Beating that girl isn’t easy, I can promise you that.  She’s had my number most of the times we’ve raced, but I just found out that we’re 2-0 against her in final rounds, so I guess that balances it out a bit.

“Everyone else in this class better watch out because Elite-powered cars are dominating right now and we’re going to win a bunch more races.  Hopefully that includes our group.  I’d like to win several in a row.  I have such a great team of dedicated guys.  I’m lucky.” 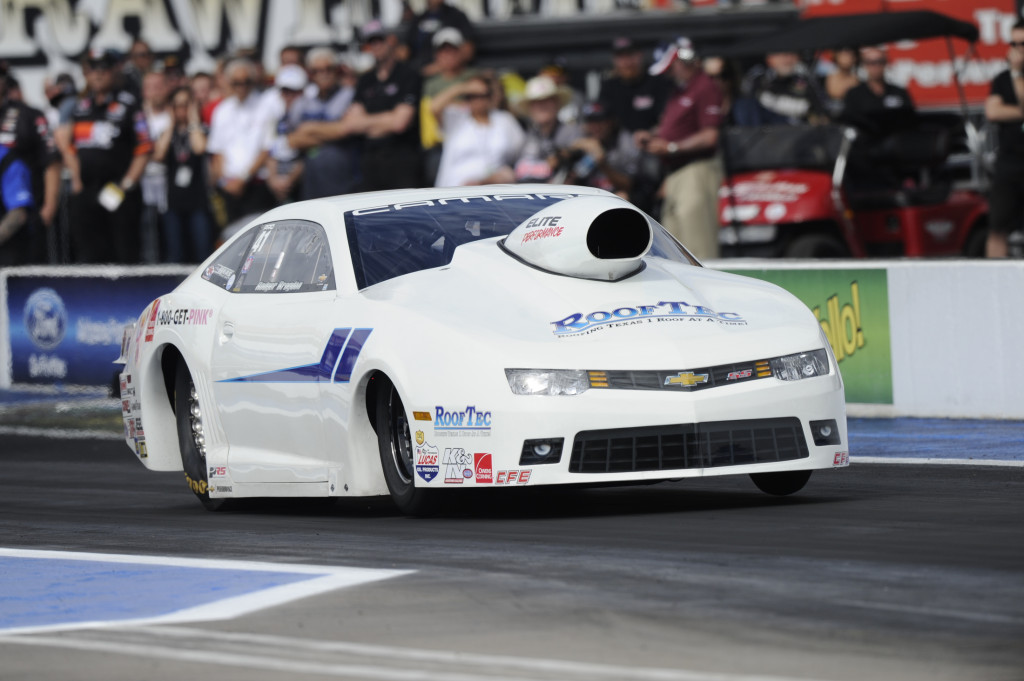 Brogdon beat Deric Kramer, Shane Gray, and Drew Skillman to get a shot at Enders-Stevens.  Although he gave up a .033-second head start in the final, he quickly passed Enders-Stevens and drove away for a 6.560-second, 211.49-mph win.  Enders-Stevens appeared to have a mechanical issue and slowed to a 6.640 at 205.51 mph.

“What’s crazy is we really didn’t decide to race until maybe two or three weeks before Pomona,” said Brogdon, who is competing this season without the help of a corporate sponsor.  “We decided to run the first eight to 10 races and see how we do.  Certainly winning a race against the champ will help our sponsor hunt tremendously.  It shows we have the ability to run with anyone and even contend for the championship.

“It takes a lot of talent in every position on the crew, great horsepower, and a big sponsor to run at this level for an extended period of time.  We’ve got a team helping us search for sponsors, but it’s very hard to do.  All I can do as a driver is try my best on the track so we draw as much attention as possible to what we’re doing.

“We started off with Elite Motorsports this year and that makes everything a lot easier,” Brogdon said, now a three-time Pro Stock winner.  “This is the earliest I’ve ever won a race in a season.  It’s great to win one early and I am the points leader for the first time in my career.  I think we’ve got a great opportunity this season.  Everybody who follows this sport knows how hard it is to win a race.  This is fantastic.  My crew is telling me this car is going to be faster at Gainesville, so I think we are going to have some fun this year.”

Brogdon, Hagan and Schumacher have a few weeks to revel in their victories as the tour next races on March 13-15 in the historic Amalie Oil NHRA Gatornationals in Gainesville, Florida.