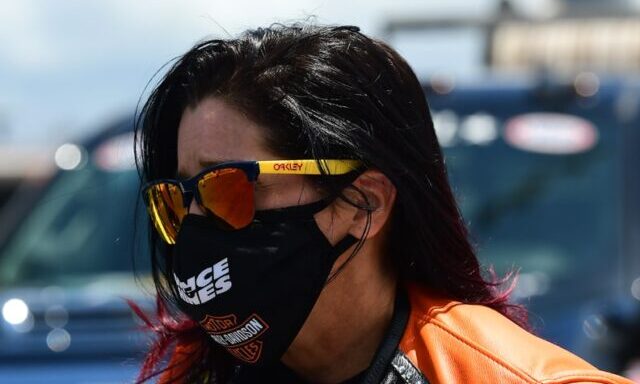 Three-time NHRA Camping World Drag Racing Series Pro Stock Motorcycle (PSM) champion Angelle Sampey will return to her Suzuki roots when the racing season kicks off at the 52nd annual Amalie Motor Oil Gatornationals this March 12-14. Returning to the fray with Vance & Hines (V&H) and using the newly developed four-valve Suzuki engine, Sampey sports sponsorship from Mission Foods as she embarks on a quest to earn her fourth career championship in the two-wheel class.

At the moment, Angelle Sampey has the most successful record of any NHRA female racer, with 43 class victories in National events. She trails teammates Andrew Hines and Eddie Krawiec, along with the late, legendary Dave Schultz, standing fourth in class for National victories. The 2021 season marks Sampey’s third consecutive with V&H; she rode the difficult Harley-Davidson Screamin’ Eagle motorcycle and learned to respect and win in 2020 with the H-D bike.

Sampey will be among the first to ride the new four-valve Suzuki. She started on Suzuki motorcycles as she began her vaunted NHRA career and won three consecutive championships, in 2000, 2001 and 2002 riding George Bryce-developed Suzuki bikes. Her new 1850cc Suzuki delivers almost 400 horsepower; a new, custom chassis has been developed for this engine, using data from thousands of runs in NHRA competition, V&H said. She’ll be using the White Alligator Racing (WAR)-developed Hayabusa body that was originally designed for her former PSM team, Don Schumacher Racing. 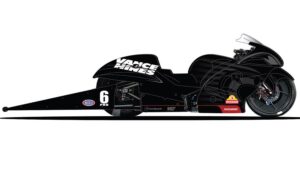 In making the announcement, Sampey expressed her pleasure at continuing with the V&H operation. “This is a first-class company that gives me the best bikes I’ve ever ridden,” she said. “I’m feeling really good about what we can accomplish together this year.”

Although they won’t be riding with her, her teammates of the past two years, Andrew Hines and Eddie Krawiec will be Sampey’s crew chiefs. Longtime V&H crew member Scott Sceurman is the bike chief and Ray Veirs serves as transport driver and bike mechanic for the effort.

V&H president and CEO Mike Kennedy noted, “We are in a wonderful position right now, happy to be working with Angelle once again. We’ve got one of the top riders in the sport aboard our outstanding new equipment, and we have Mission Foods as our new team partner. I couldn’t have hoped for anything better as we go into the 2021 season.”

The new team features the brilliant yellow and red Mission Foods logo on Sampey’s race bikes, on her racing leathers, along with crew clothing and team transporter, for all 16 of the scheduled Pro Stock Motorcycle events in 2021. Mission Foods, the world’s largest manufacturer of tortillas and wraps, continues to introduce its products to race fans with this new engagement. The multi-billiion-dollar company has active partnerships in INDYCAR (with the Arrow McLaren SP team), AFT (American Flat Track) and GT3 competition.

“Terry Vance and I have talked about putting together a race team,” said Juan Gonzalez, president and CEO of Mission Foods, “and I was overjoyed to get this invitation to work with Angelle and the Vance & Hines crew. NHRA has a great tradition and loyal fan base. We can’t wait to see our brand and products at this year’s NHRA races.”