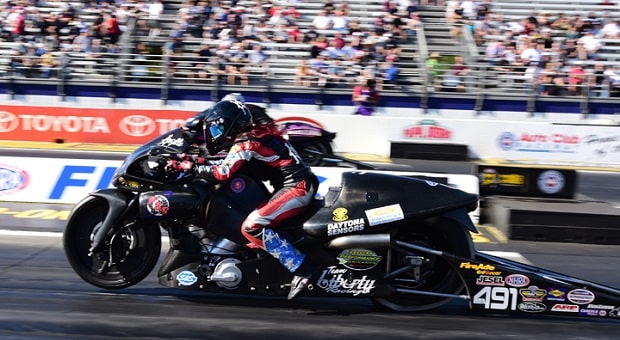 Three-time NHRA Pro Stock Motorcycle champion Angelle Sampey is parting ways with Liberty Racing following a two-season partnership. After achieving her titles with Star Racing, Sampey semi-retired from the sport after the 2008 season, only to rejoin Star in late 2014.

Sampey and Cory Reed formed Liberty Racing in 2017, initially campaigning Victory motorcycles, but later racing with Buell chassis and engines. She has, in addition to her three consecutive Pro Stock Motorcycle titles in 2000-2002, 15 top-10 finishes to her credit, along with 42 national event wins in 73 final round appearances, making her the most successful female racer in all of motorsports.

In earning her seventh-place finish in this year’s NHRA Countdown to the Championship, Angelle Sampey has already qualified for next season’s race-within-a-race Mickey Thompson Tires & Wheels Pro Bike Battle, held at Sonoma Raceway each July.

Sampey is currently evaluating a number of options that will keep her on-track for the 2019 16-race season, and intends to speak with both potential sponsors and team owners during this week’s Performance Racing Industry trade show in Indianapolis. Once the 2018 campaign was completed at Pomona, where Sampey secured a second-round result, she sat down with Reed to discuss the direction of the team and their future together.

“As a result of those discussions,” she said, “I decided that it was best to take a step back and look at other options.

“I am extremely grateful to Cory Reed, the Whiteley family and everyone at Liberty Racing for allowing me to be a part of the team and continue my career these last two seasons. We had our share of growing pains, but I’m proud that we were able to make it into the top 10 this year.” 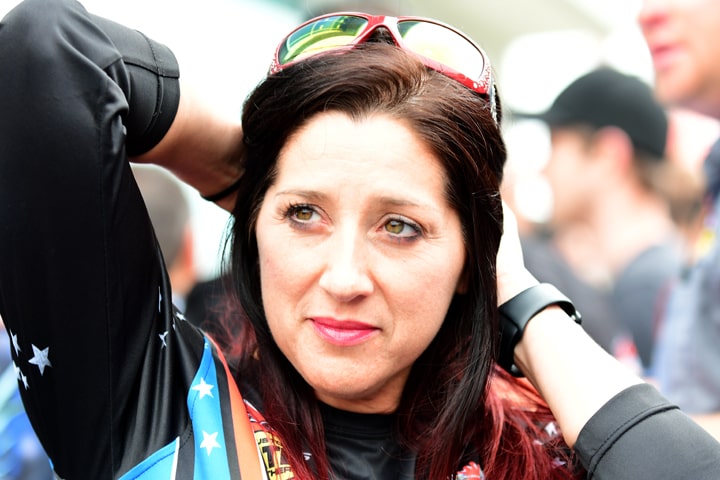 Joey Gladstone joined Liberty Racing late in the season and intends to run the full 2019 campaign, with Reed returning for a full-season attack on the title.

“The opportunity was there for us to race a third motorcycle,” Sampey allowed, “but that would require additional funding, and at this point I just don’t have it.”

At the age of 48, Sampey believes she’s in “the best shape of my life; I believe I still have what it takes to be competitive. Anyone who knows me understands that I wouldn’t do this if I didn’t think I still had the ability to win races and compete for championships. I still have the desire to compete at a high level and I just need the opportunity to join the right organization.”

While it’s her intent and desire to continue racing in NHRA’s Pro Stock Motorcycle class, if that’s not possible, she will stay involved in the sport.

“I believe I have a lot to offer both on and off the track,” she said. “I enjoy motivational speaking and I’d also welcome the opportunity to mentor an up-and-coming young driver. I’ve learned a lot in the 20-plus years I’ve been out here and I’m eager to share my experiences.”