From Friday to yesterday, the Yellow Bullet Nationals have been a wild ride. There were a few crashes in among the great racing, but overall it’s been one fun event. 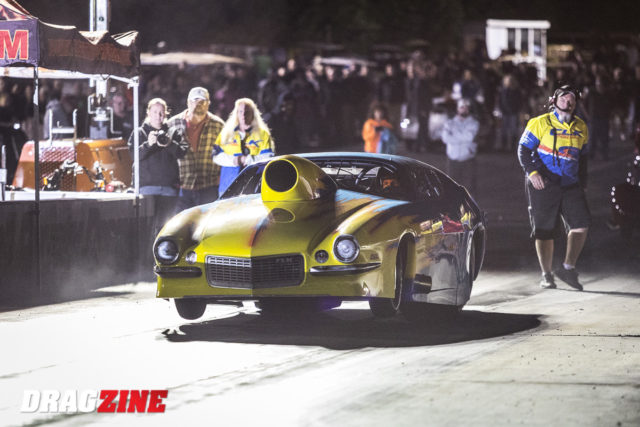 Drivers came from far and wide, gathering at Cecil County Dragway to take part in this action-packed weekend. According to online racing magazine Dragzine, this event never fails to draw “The baddest doorslammer and small-tire racers from the Northeast and beyond.” With press like that, you know it’s got to be good!

Some standout performances included Luiz Martinez’ flawless reaction time in the final round of the 8.50 Index, carrying him past John Goss to take the win, and Chris Krajewski’s impressive comeback from 27th place to victory in the Top Sportsman class. Really, though, the whole show was quite a spectacle.

A few rounds led to results that also made an impression, but for the wrong reasons. In the X275 class, Vinny Gianelli spun across the track and into a wall, fortunately avoiding harm himself, although his car was not so lucky. Nick Agostino, in the Outlaw 10.5 class, flipped his Camaro up in the air and landed wrong side up. He was injured, but not too badly. You can take a look in the video below.

Here’s some video coverage of some smoother racing, to give you a bit of a picture of what this event is like. If it seems to be up your alley, keep an eye out for next year’s event!