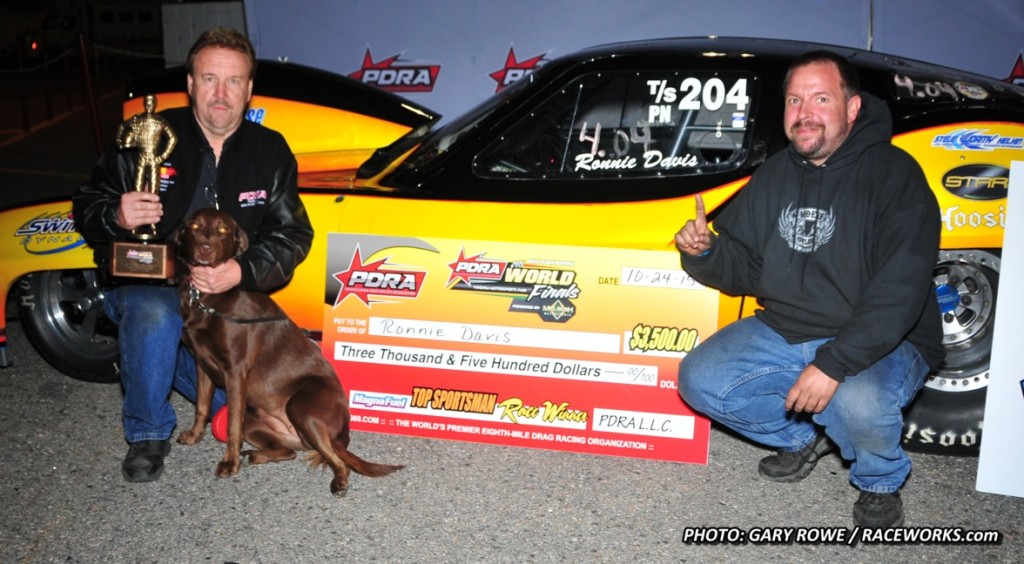 Whether in a full bodied stock car, open wheel race machine or a high powered drag car, any driver who slips behind the wheel each week is well aware of the risks associated with the sport that they love.

While the families, friends and fans of these drivers never hope that they will have to witness the day that their favorite drivers will either be unable to compete or otherwise, there are those times when we have utter the words…“So long my friend”.

Unfortunately, we are saddened to be uttering these words today following the passing of Ronnie “The King” Davis. The 66-year-old Top Sportsman competitor, who was competing in last weekend’s PDRA Spring Nationals at Rockingham Dragway, was involved in a serious crash in his final qualifying run after his 1963 Corvette  turned left and shot across the track in front of rival Mark Malcuit’s car.

This video shows the crash, and while it’s not graphic, we want to warn sensitive readers:

(ETA 12/28/16: The video has since been removed from public channels and is no longer available.)

The Top Sportsman World Champion and five-time IHRA season champion’s car didn’t come to a stop until after going airborne and barrel rolling over the guard rail. Although, Davis was pulled from his car and rushed to Moore County Regional Hospital and later to UNC Medical Center in Chapel Hill, his injuries were too severe and we were all forced to say goodbye to a talented drag racing legend. Everyone here at RacingJunk.com is praying for those affected by this talented driver’s passing and hope that each of you will take the time to remember this fierce competitor.

We are also sending out positive thoughts for freelance journalist Ian Tocher, who was also injured during this crash. Stay tuned to RacingJunk.com for updates on his condition as well as this developing story.

Our thoughts go out to the racing community, and particularly to the family and friends of these drivers.

About Ellen Richardson 433 Articles
Ellen Richardson is the author of Behind The Wheel for RacingJunk.com. This automotive sports junkie has a passion for telling an athlete's story while also covering various racing activities. Find out more about her at ellennrichardson.wordpress.com or follow Ellen on Twitter at @ellennrich or Instagram at elnrich33.