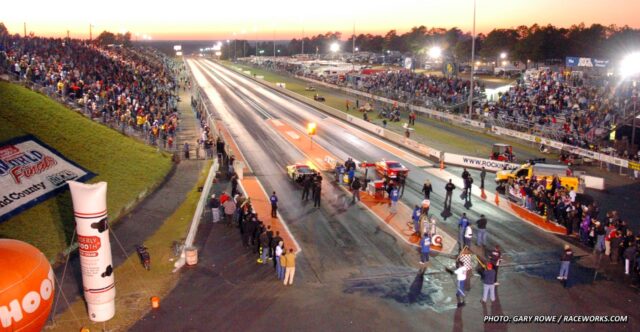 Via The Richmond Observer

The legendary Rockingham Dragway will have a pair of new owners. Earwood the owner announced that an agreement was made to sell the 50-year-old speedway and concert venue to Al Gennarelli and Dan VanHorn, which will be a 2-year process.

Earwood, 72, announced on Tuesday that he has met an agreement to sell the dragway, first built in 1968 by L.G. DeWitt, to a pair of partners.

New owners Al Gennarelli, 49, (Gates, N.C.) and Dan VanHorn, 47, (Stafford, Va.) are set to purchase the racing and concert venue together, which is located across the street from Rockingham Speedway, over a “unique” two-year process.

The selling price for the dragway is $1.9 million and comes just two summers after “The Rock” was bought by Rockingham Properties LLC for $2.8 million. Earwood explained that Gennarelli and VanHorn have already paid a non-refundable six-figure down payment.

The final sale, which is projected to occur in Oct. 2022, will see Gennarelli and VanHorn will pay a majority of the selling price.

“I’ve been in this industry for 48 years, and at some point in time, you have to look at getting out,” Earwood chuckled. “I didn’t want to sell to just anybody because I have 28 years invested in the place.

“I wanted to make sure the County was getting great new owners because the County has been very good to me all these years,” he added.

Earwood, who was the national media relations director at the NHRA before owning the dragway, isn’t quite ready to let everything go.

Gennarelli and VanHorn are no strangers to the sport or the Rockingham Dragway, and will both compete in the upcoming 29th annual Griffin Motors MOPARS, featuring the Modern Street Hemi Shootout series created by VanHorn in 2009.

A Pennsylvania native, Gennarelli has owned his own concrete and construction business the last 22 years. On the race track, his Dodge Challenger was the first modern MOPAR to break eight seconds, using a Gen3 hemi to post a quarter-mile time of 7.85 seconds and going over 175 miles per hour.

“I’m looking forward to a new chapter in my racing career as a track co-owner with Dan,” Gennarelli said in a press release put out by the Dragway. “And I’m excited to be able to apply my flair for business to my passion of racing.”

Military member, VanHorn served in the United States Air Force as an air traffic controller. Following his time with the USAF, VanHorn spent the last 23 years as a Federal Aviation Administration controller.

Like Gennarelli, VanHorn is a lifelong MOPAR and hemi fan. He has raced a Dodge Challenger in the Modern Street Hemi Shootout series, an event he created 11 years ago.

“Now that my career as an air traffic controller is winding down, I’m excited to be able to pursue drag racing at its highest level as a track owner with my fellow hemi racer Al,” VanHorn said.

When asked what made Gennarelli and VanHorn the perfect duo to sell the dragway to, Earwood said one word — passion. He said it’s the key ingredient to make a track successful, especially since it’s an around-the-clock job.

“We have had a lot of offers to sell the business over the years, but one of my concerns has always been what impact the sale would have on our races, manufacturers, sponsors and our fans,” Earwood explained.

“I never felt confident they would be taken care of until I started talking to Dan,” he added. “With Dan and Al taking over, I believe the track’s future is secure and that it will continue to serve as Richmond County’s principal entertainment venue and visitor destination.”

About Ralph Guerra 52 Articles
Ralph Guerra is the associate editor for RacingJunk.com. Ralph grew up in Southern California's car culture and quickly became infatuated with anything and everything V8. Whether it was a 63 Fairlane with a 289 or a Gt500 with a supercharged 5.4, if it was a V8 he wanted to drive it--fast.