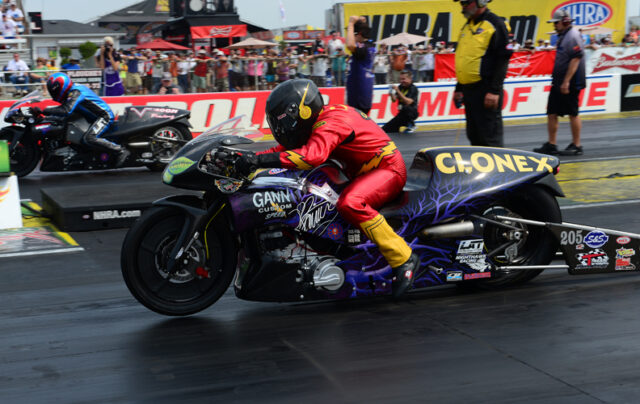 One of NHRA’s most flamboyant professional competitors has died. Shawn Gann, a five-time winner in the Mello Yello Drag Racing Series’ Pro Stock Motorcycle class passed on May 16th, apparently by his own hand. He was 42 years old and hadn’t turned a wheel in anger since the 2017 season.

Gann, whose father Blake’s Gann Custom Speed prep shop entered his motorcycle and brought success to other riders in the PSM field, was known for his flamboyance, particularly with regard to his choice of leathers. From bright red, yellow, blue or silver leathers bearing the logo of sponsor PiranaZ or even the Batman logo he proudly adopted as his own, Shawn Gann always personified the independent individual.

Mark Whisnant of PIranaZ noted, “Shawn was a very unique person and highly skilled racer,” he said. “He was also one of the nicest and approachable people you would ever meet at the track, which fit our brand to the T.” Whisnant recalled how Gann’s desire to have his leathers be a replica of a Batman suit: “We gave up the marketing placement on the leathers to let Shawn’s personality thrive,” even though the Batman theme had little to do with PiranaZ’ in-your-face clothing and hats.

What Shawn Gann was known for, aside from his wild, almost costume-like nature of his riding leathers, was a sweet and funny disposition towards his friends and competitors in the NHRA community. As three-time Pro Stock Motorcycle champion Angelle Sampey said, “Shawn was very kind to me since the day I met him over 20 years ago. I considered him a real friend and not just a competitor. He added character to our class. I will miss him and his beautiful smile.”

As the drag racing community’s Sunday was shattered with news of Gann’s death, more and more of his two-wheeled compatriots logged in: “Gone but not forgotten,” said master tuner and entrant George Bryce. “There is no way we could forget a character like the one and only Shawn Gann. He was super talented, so funny, so imaginative, always made me smile. He was a fast, awesome racer,” Bryce acknowledged.

Even without an announcement as to which rider was in which lane at any Mello Yello NHRA meeting where Pro Stock Motorcycle competed, it was always easy to discern when Gann did his burnout and approach to the staging lanes. He would rev up the engine on his Buell, toss it stridently from side to side as he primed his tires before staging. Always the showman, the show will somehow be a lot less enticing and fun now that Shawn Gann has left the building. RIP.

About Anne Proffit 802 Articles
Anne Proffit traces her love of racing - in particular drag racing - to her childhood days in Philadelphia, where Atco Dragway, Englishtown and Maple Grove Raceway were destinations just made for her. As a diversion, she was the first editor of IMSA’s Arrow newsletter, and now writes about and photographs sports cars, Indy cars, Formula 1, MotoGP, NASCAR, Formula Drift, Red Bull Global Rallycross - in addition to her first love of NHRA drag racing. A specialty is a particular admiration for the people that build and tune drag racing engines.