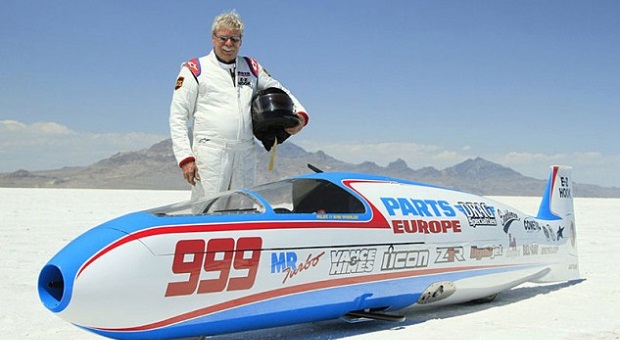 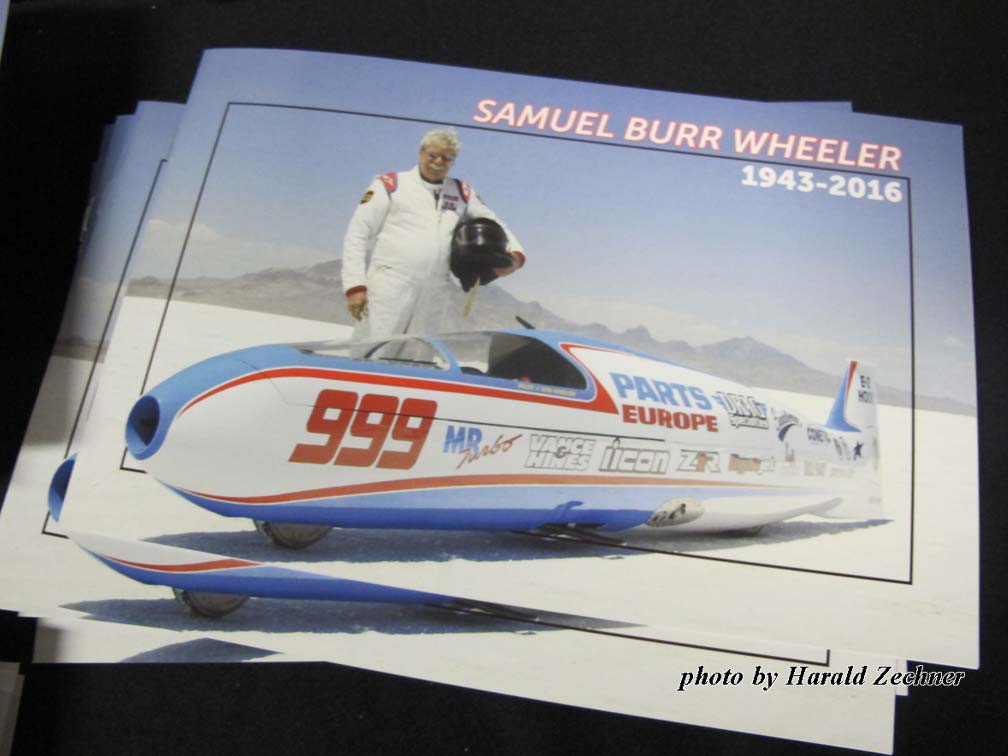 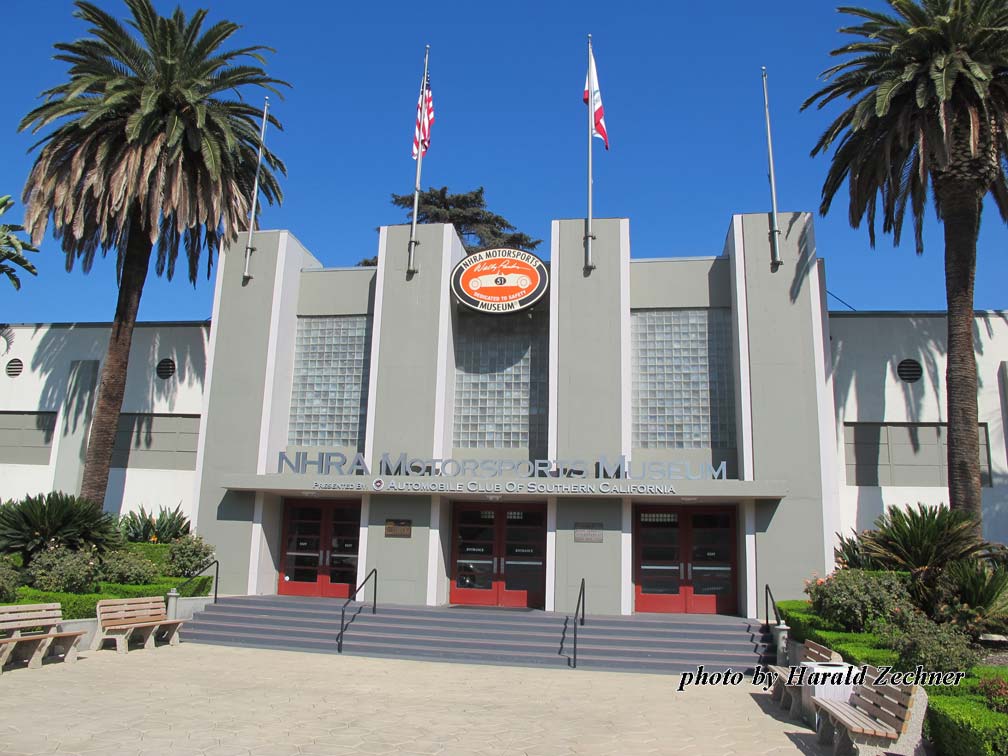 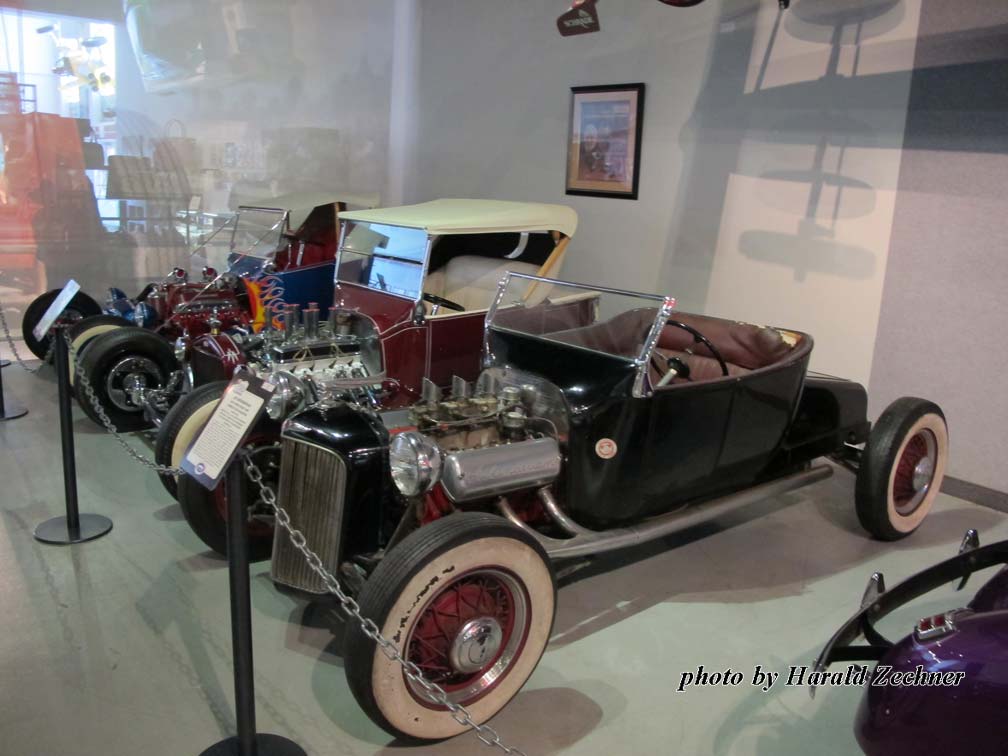 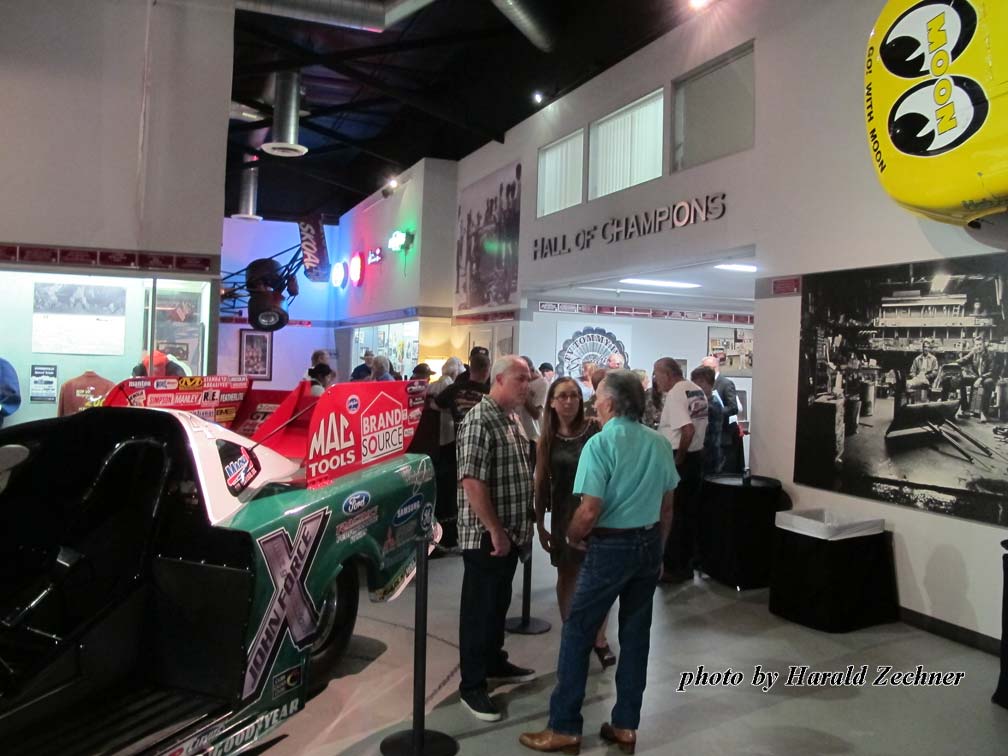 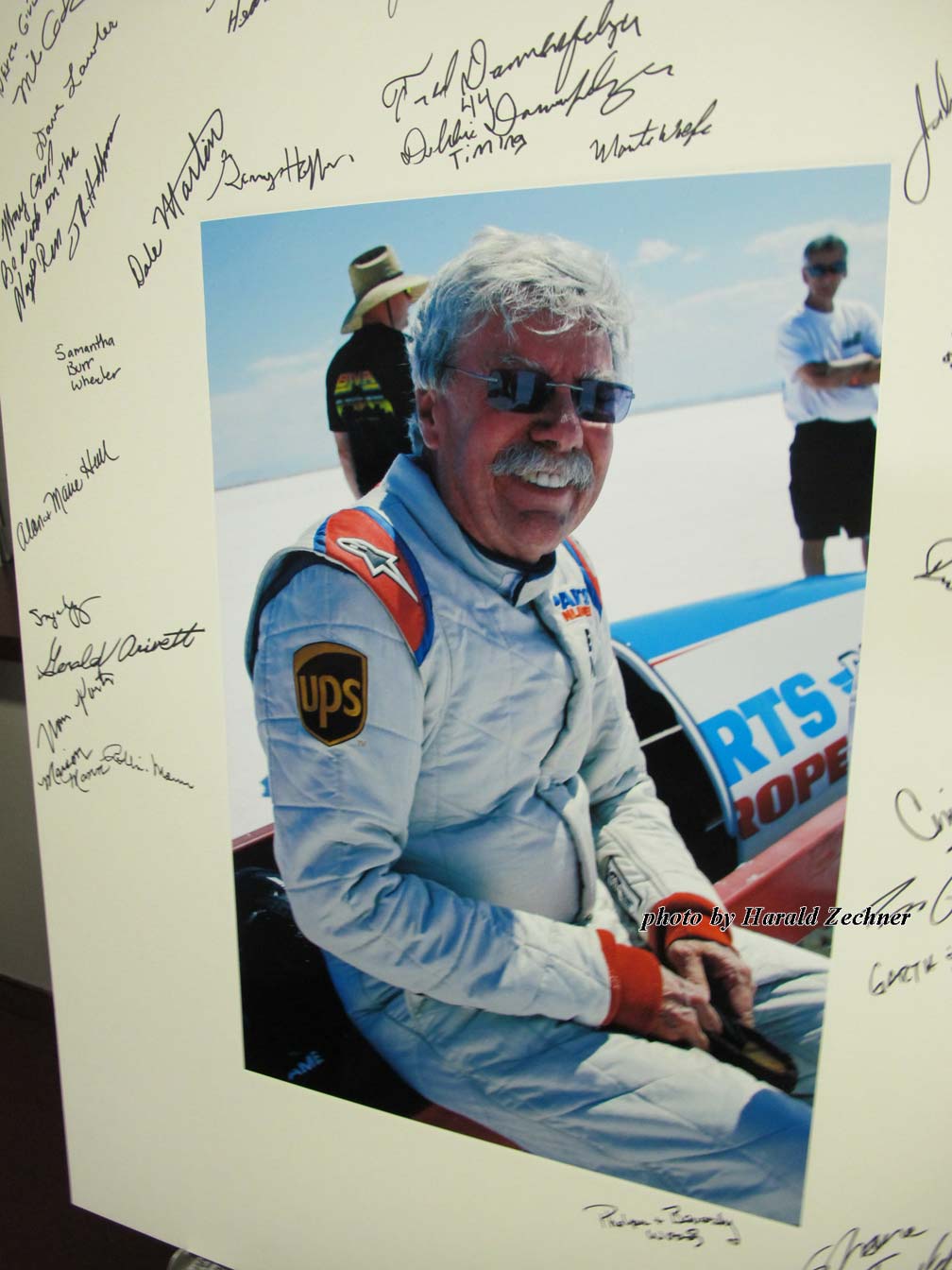 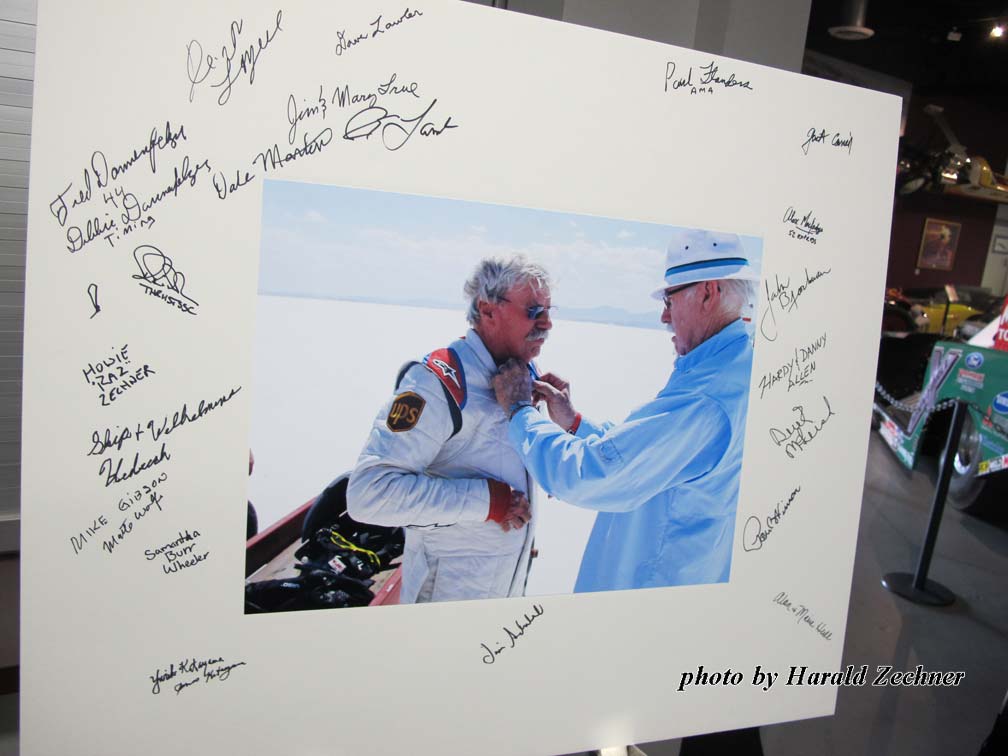 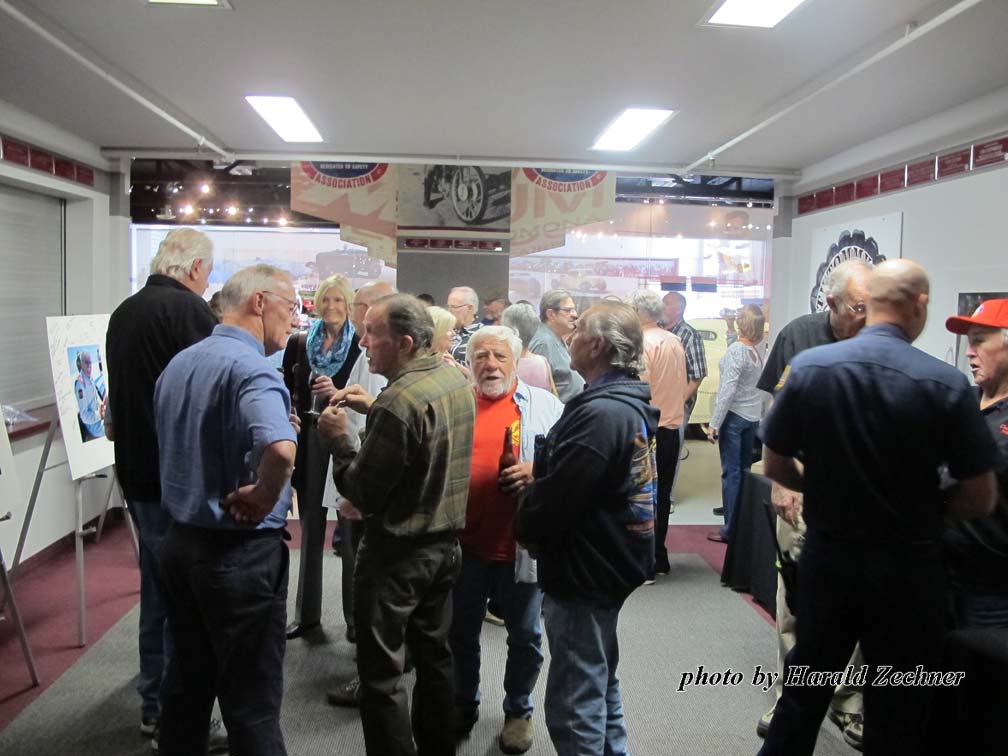 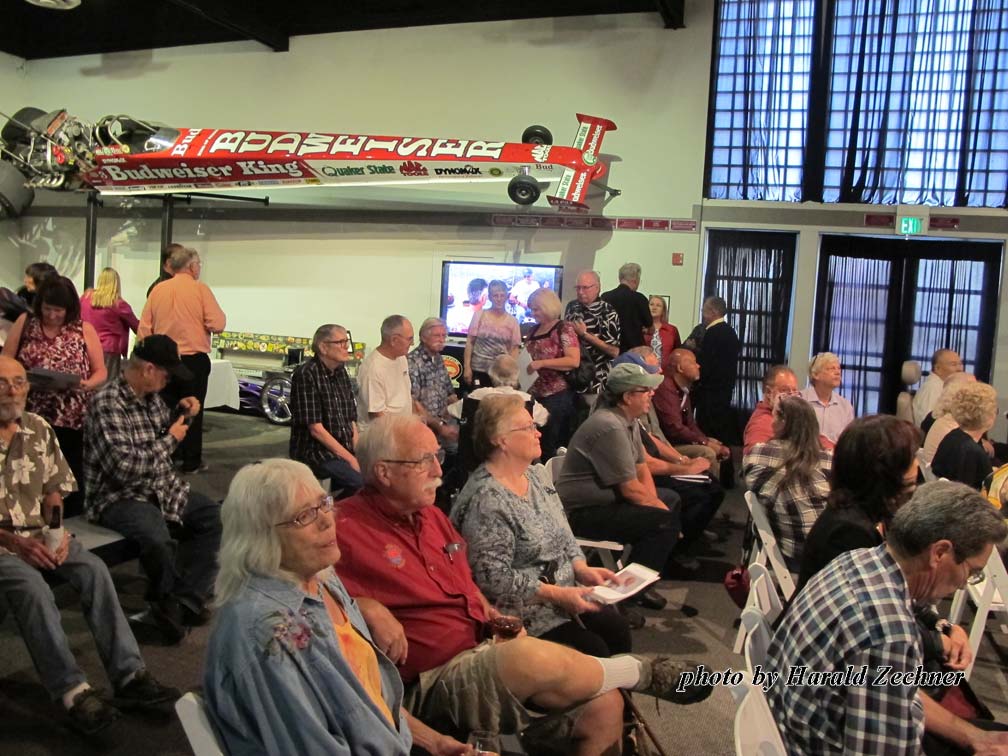 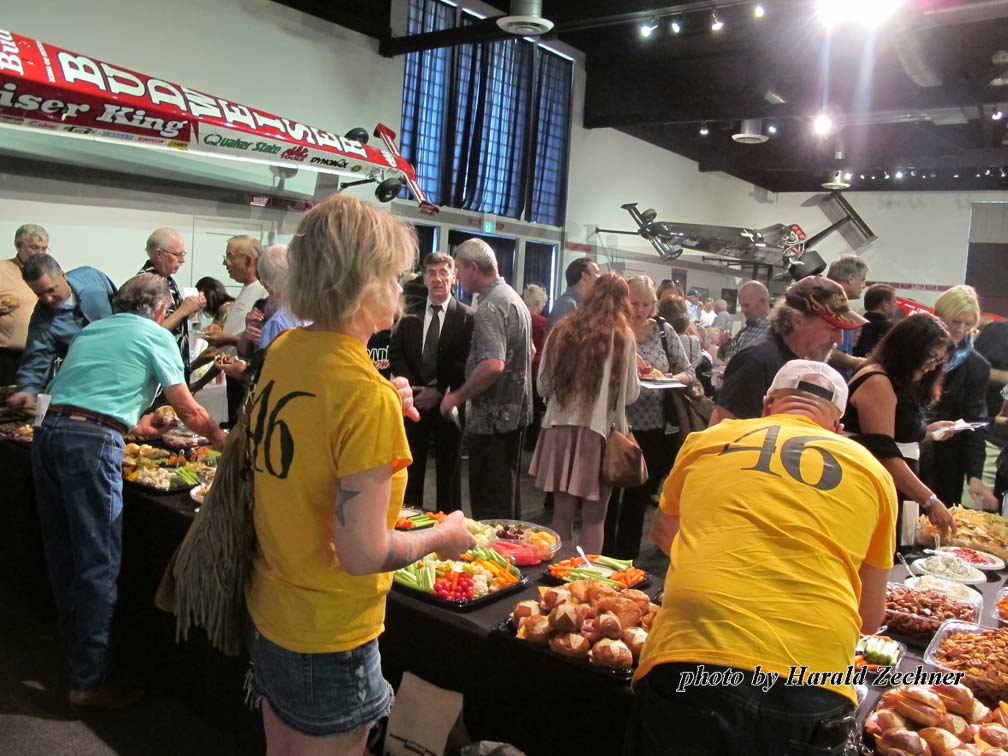 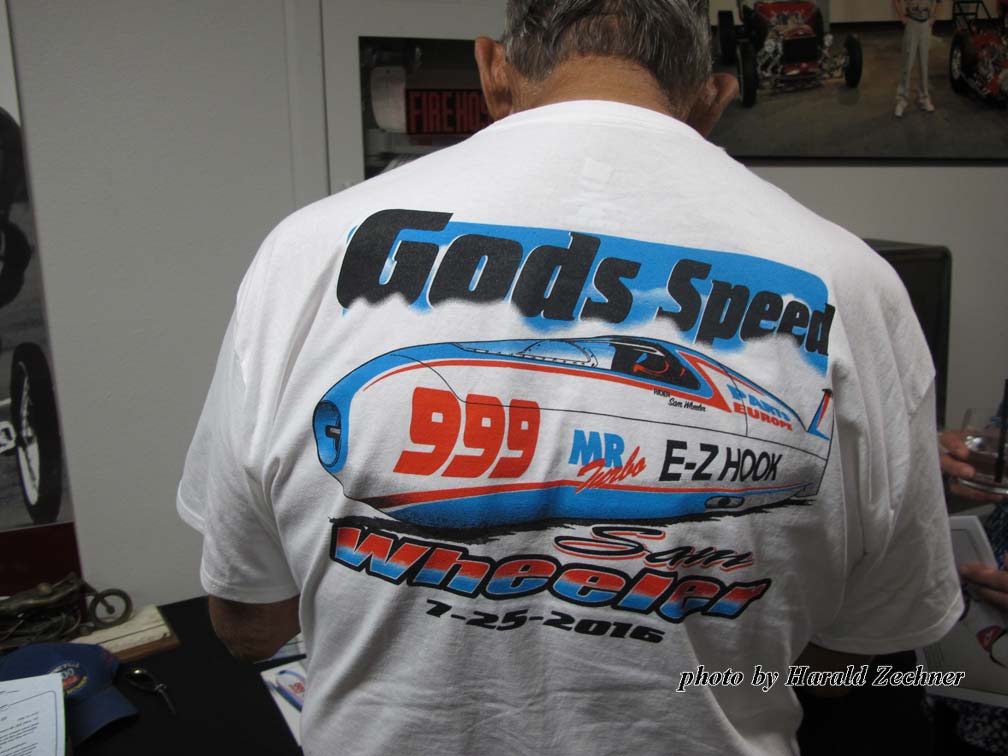 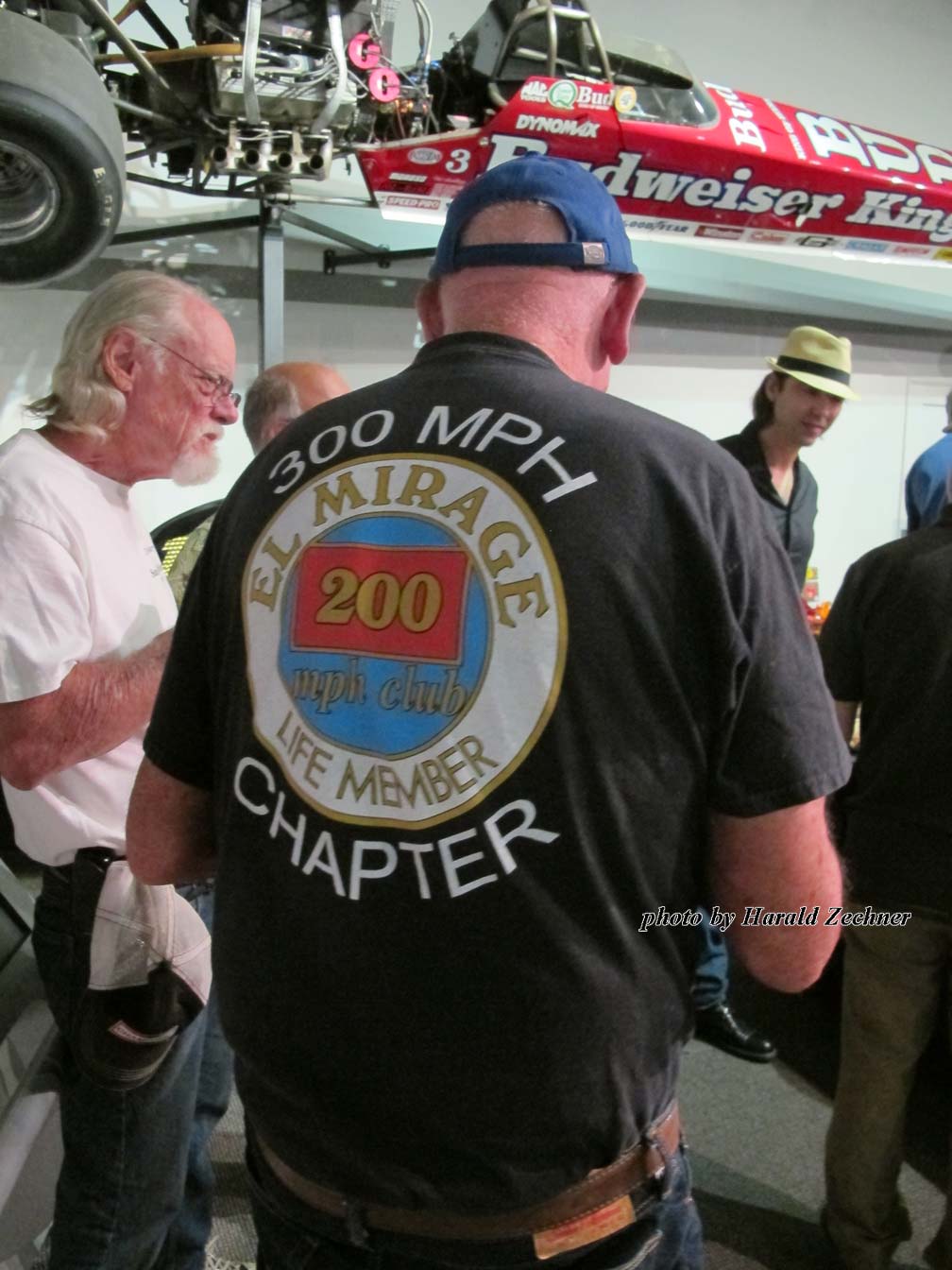 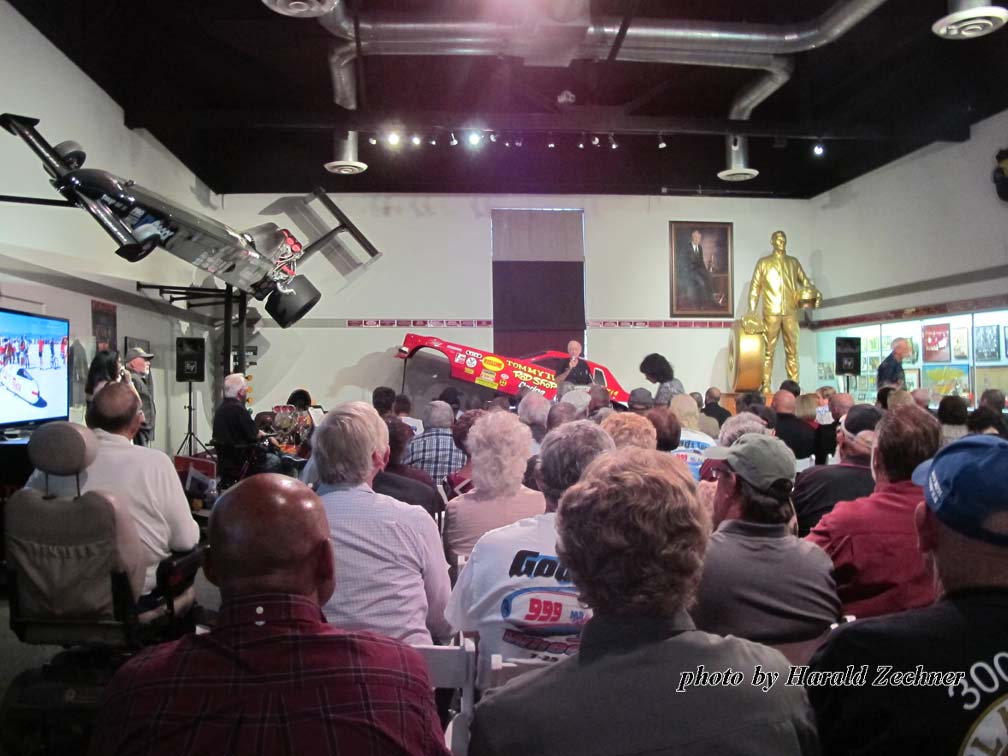 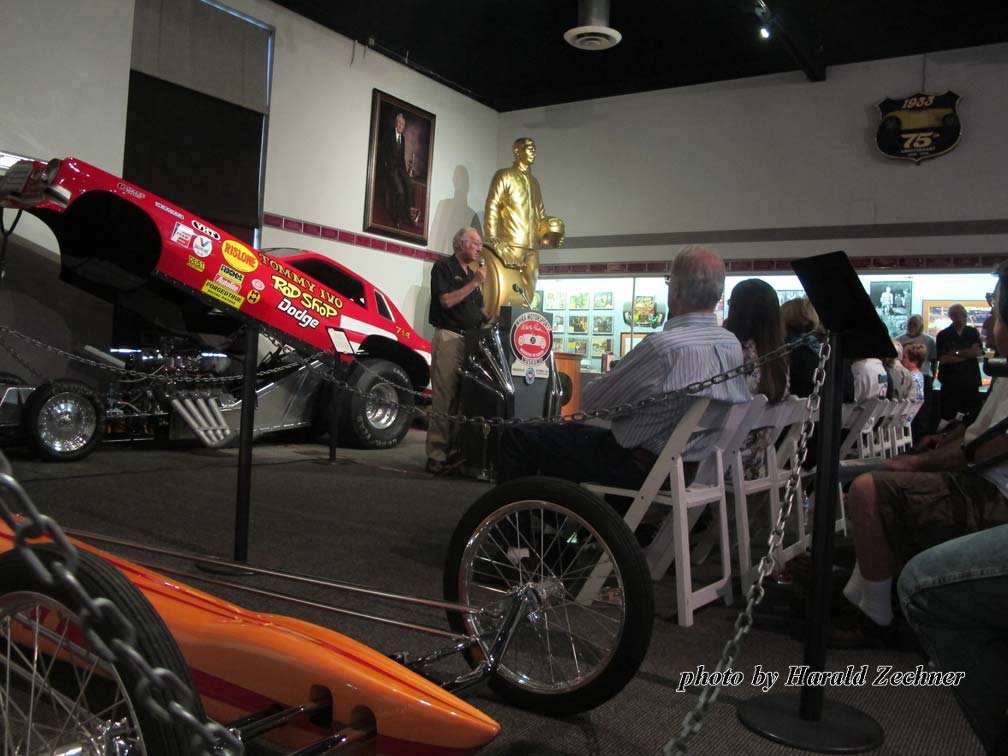 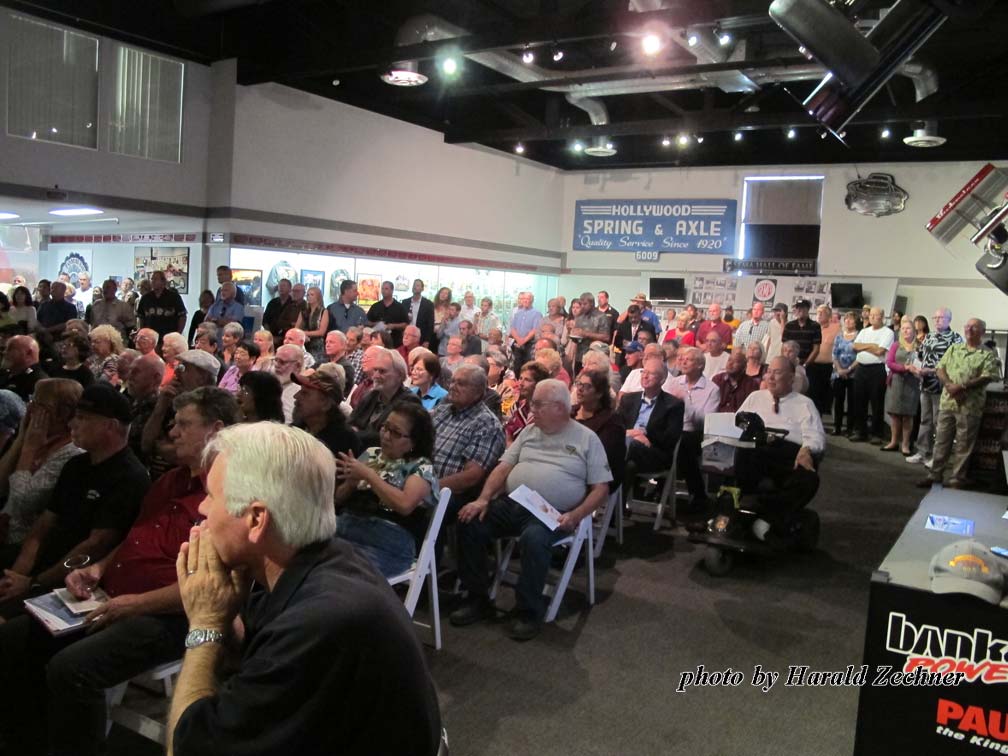 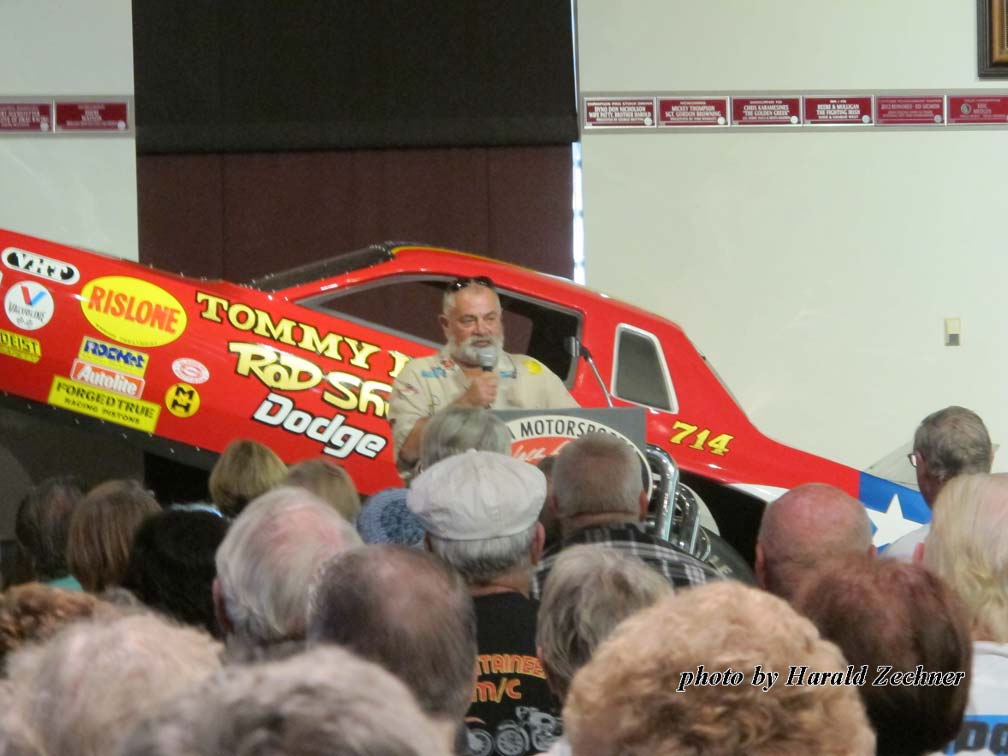 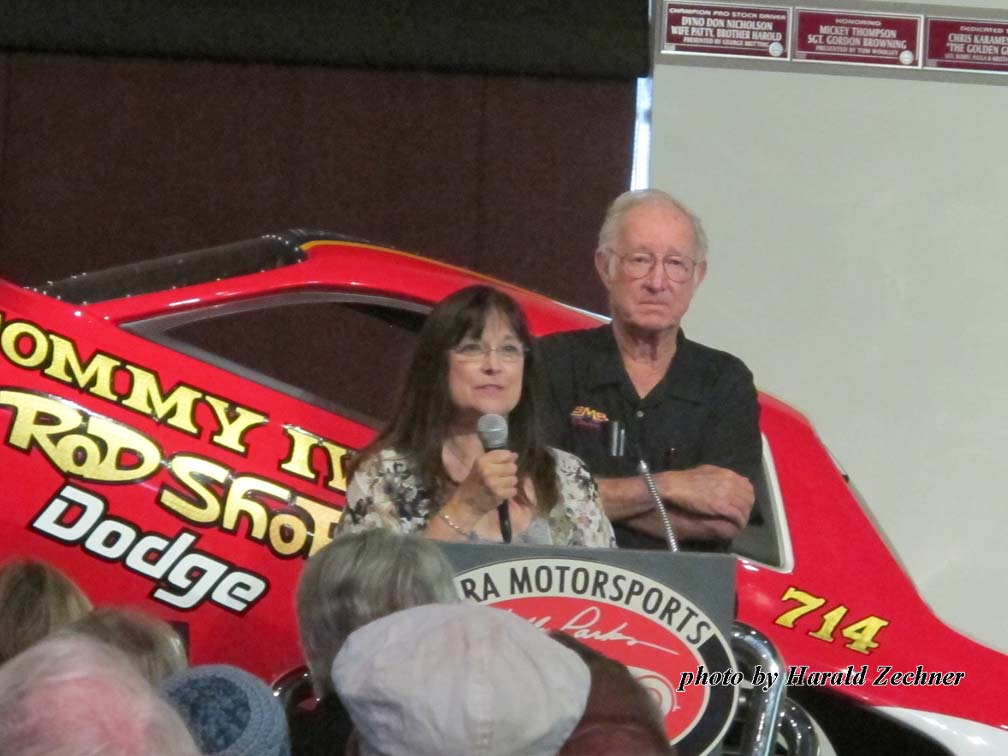 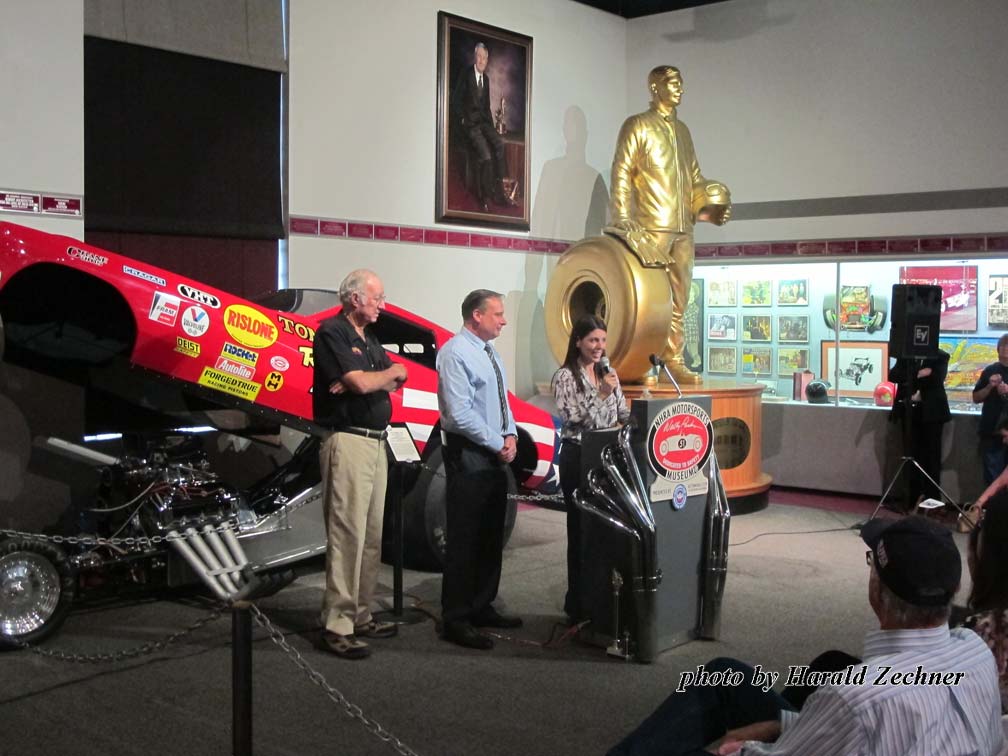 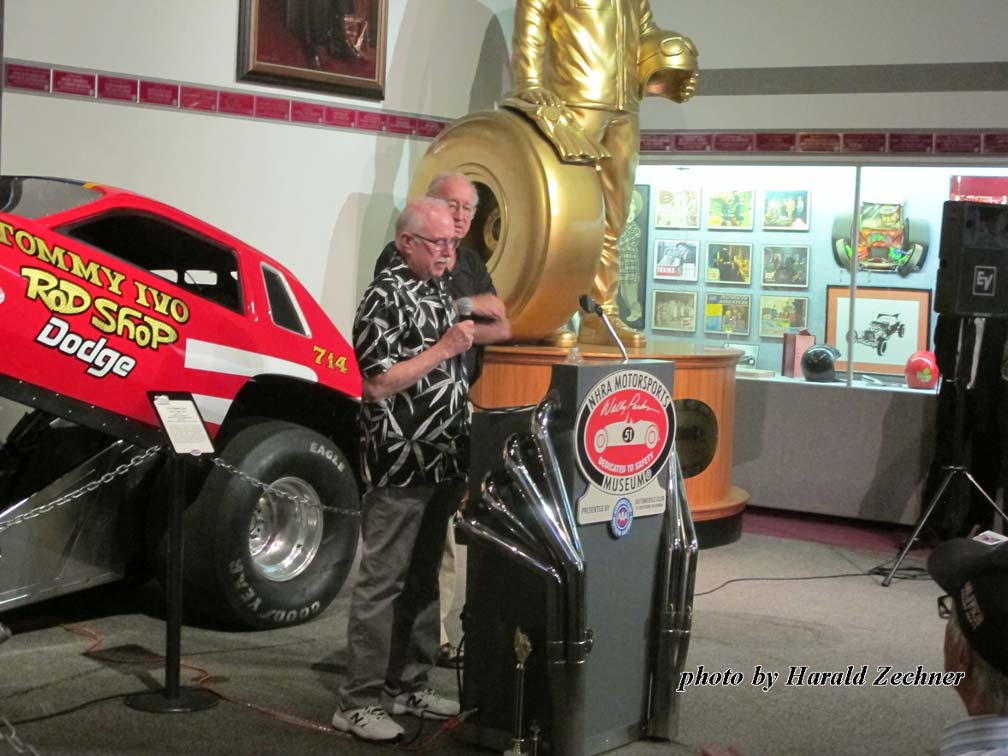 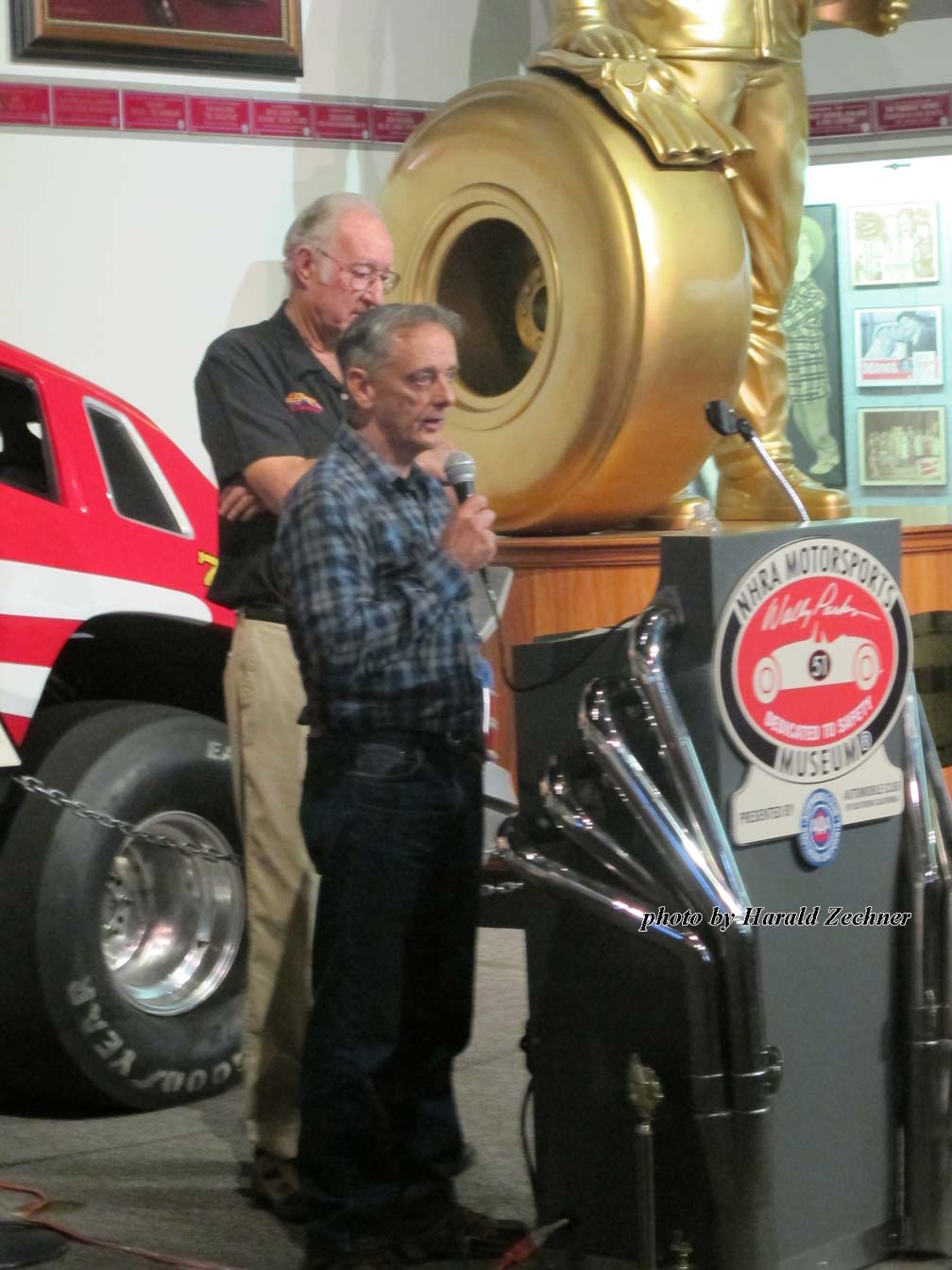 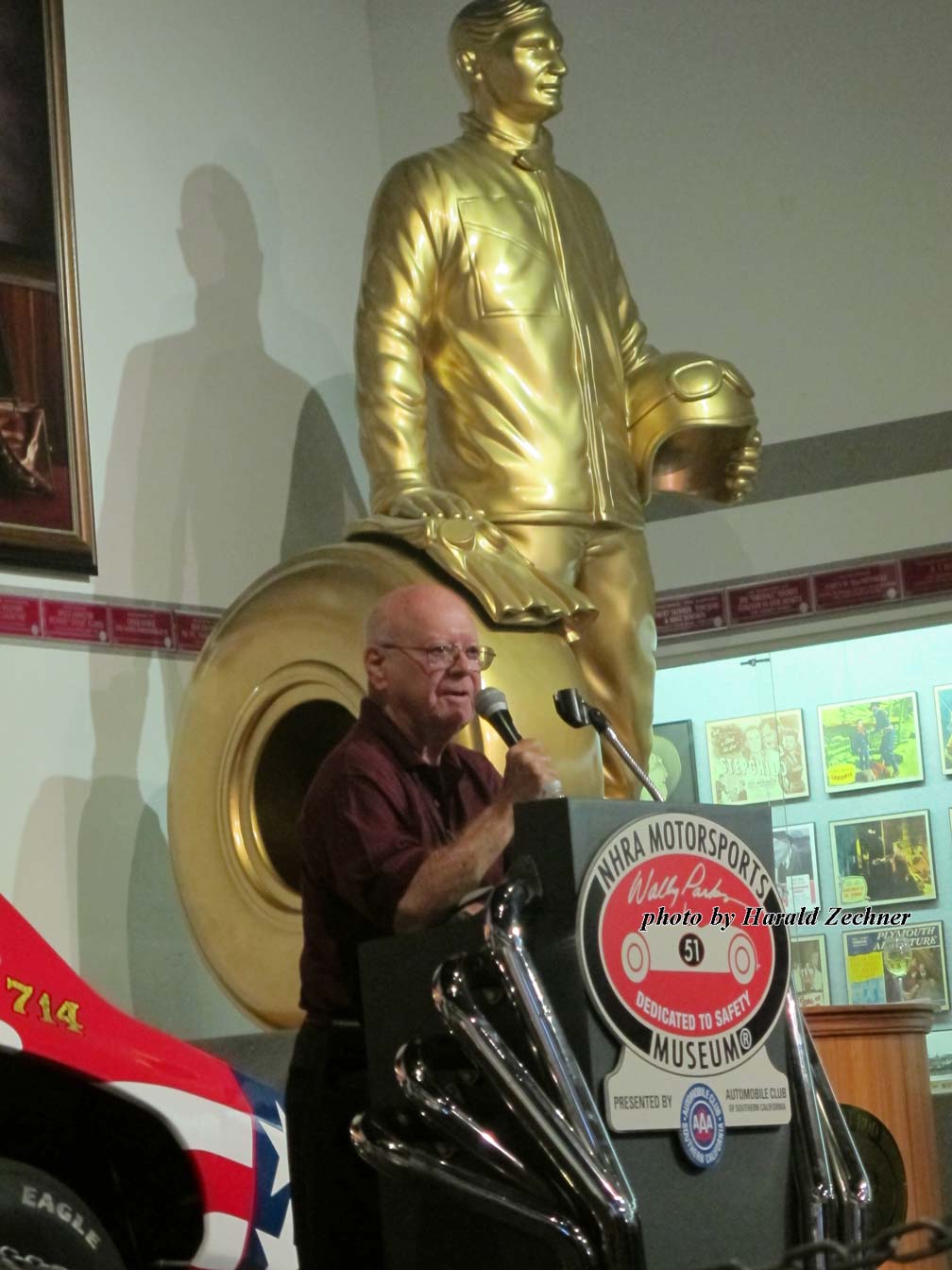 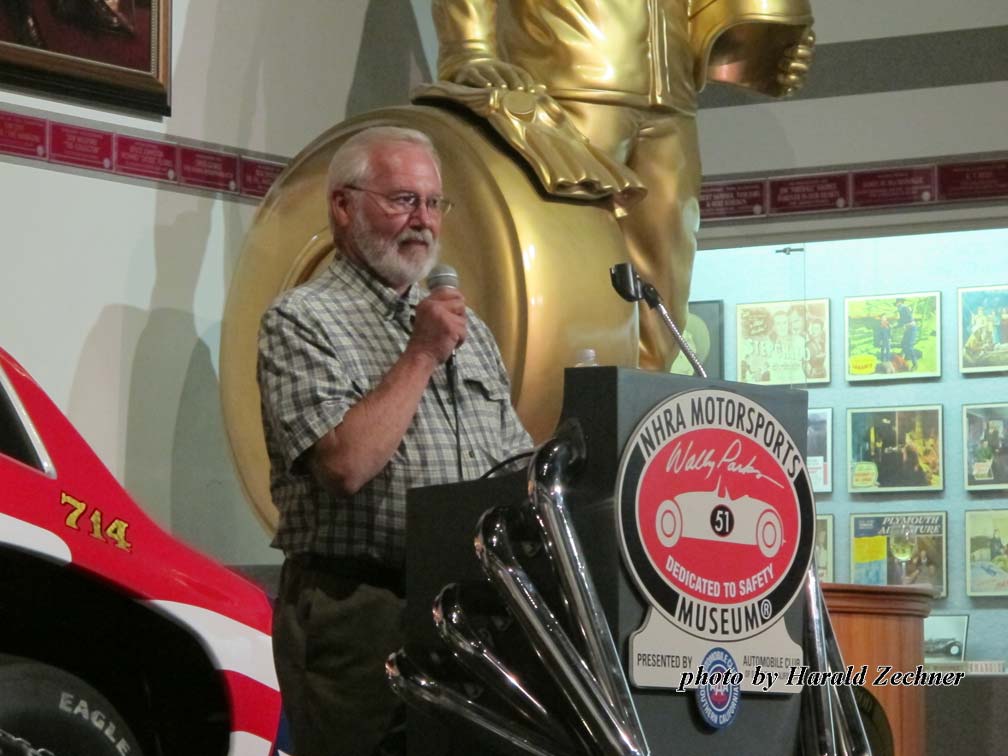 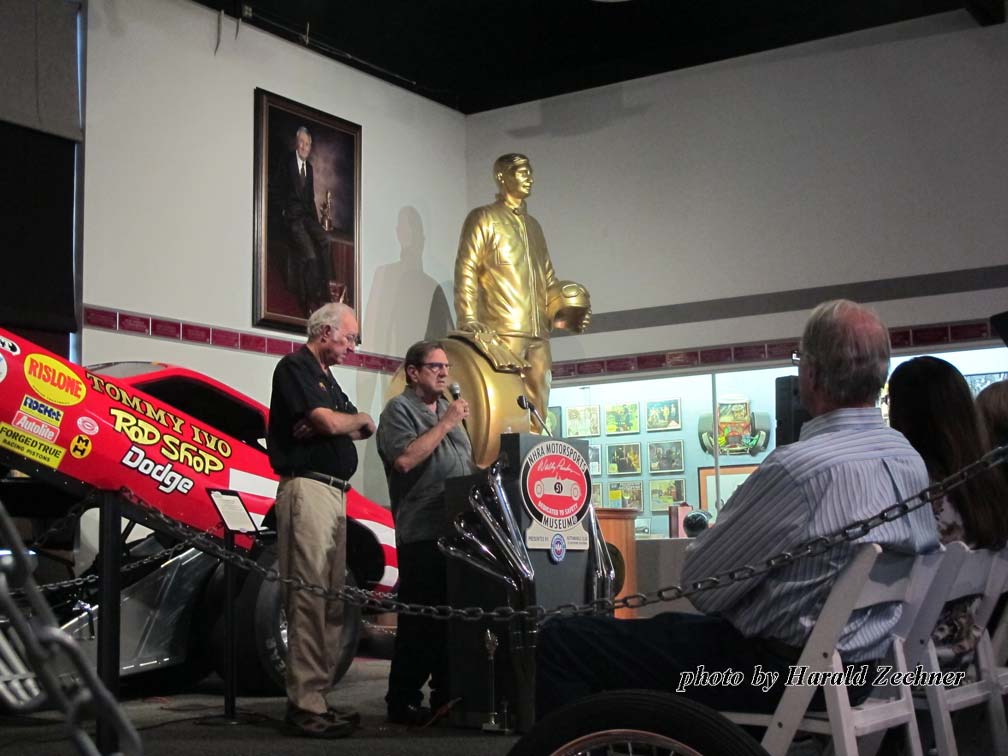 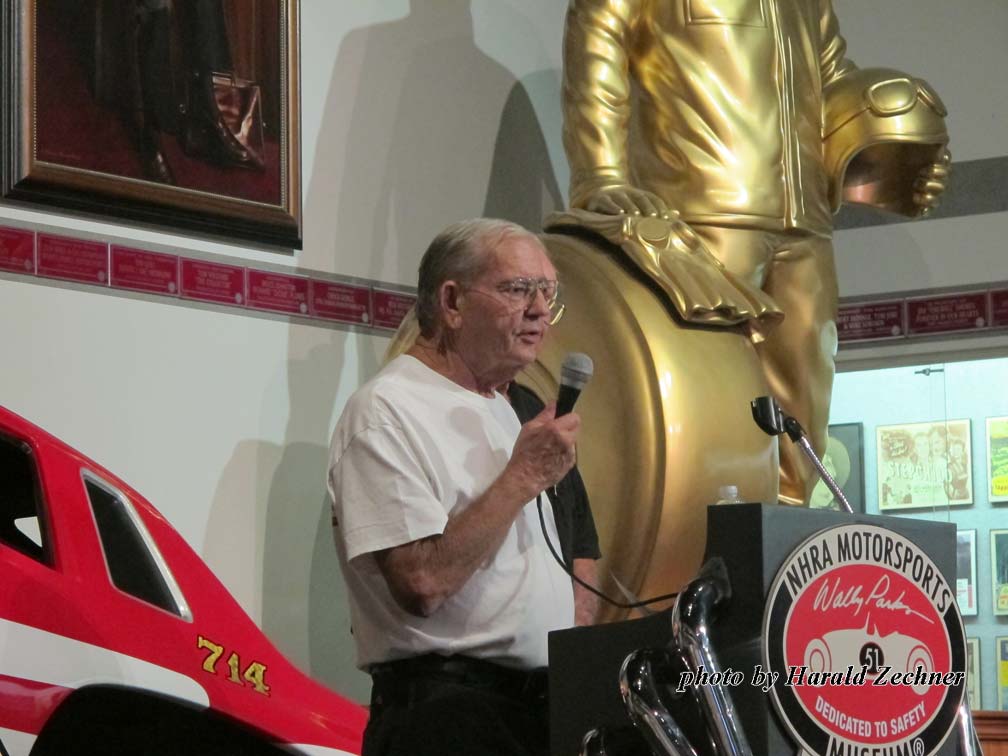 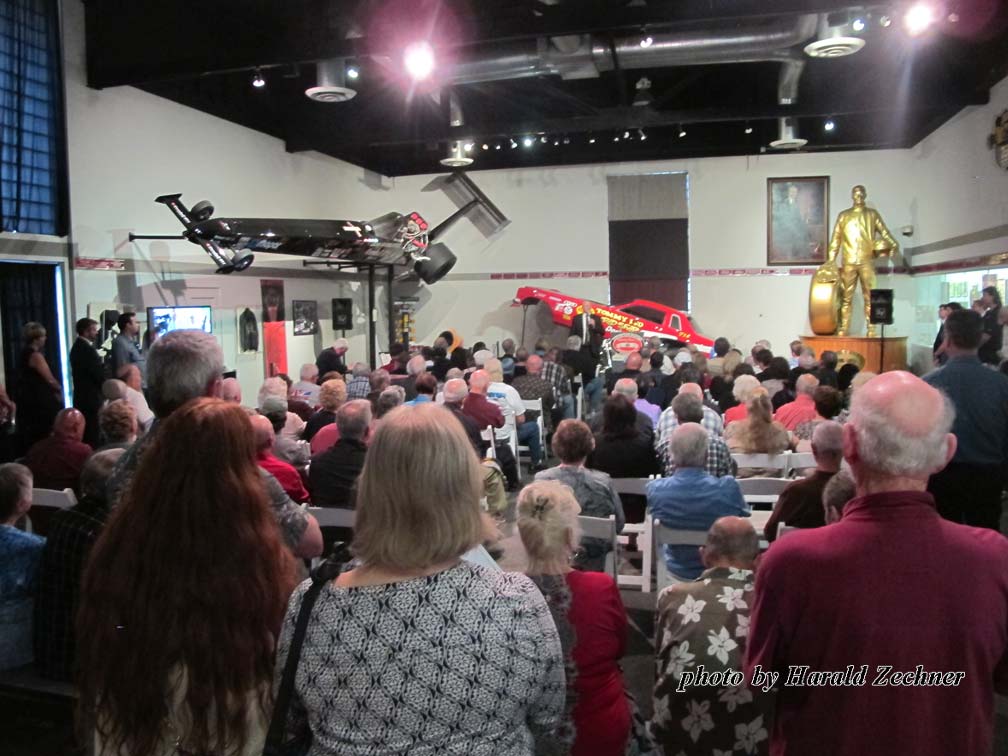 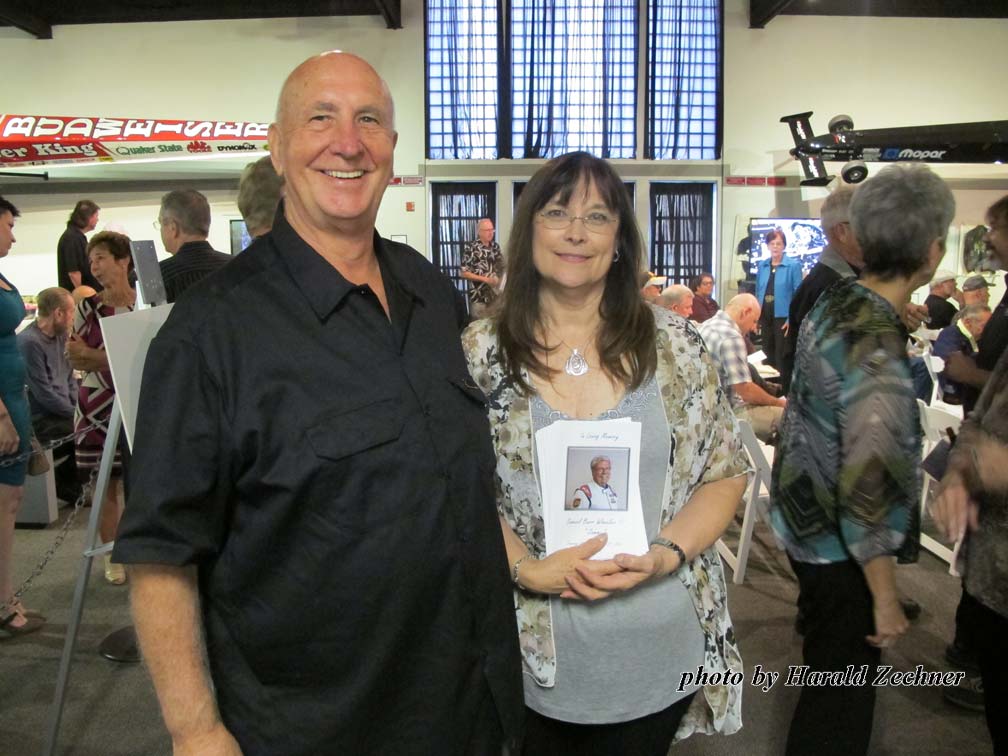 Now don’t get the wrong idea, as I mean no disrespect, but when I go I want a Celebration of Life like Sam Wheeler had. The weather was wonderful, the location perfect, and a host of friends and family filled the place to capacity, laughing, telling stories, and enjoying each others company. It was an afternoon well spent, reminiscing about yesterdays and those who leave us too early. All in all, it was a fitting tribute to honor Sam Burr Wheeler, who tragically lost his life at the Bonneville Salt Flats during testing on the EZ Hook/Parts Unlimited streamliner, which he hoped would set a new world record at the upcoming Speedweek races.

Held at the National Hot Rod Association Museum in Pomona California on Oct. 17, 2016, the event was well planned out. It took place just a short walk from the entrance, past a room full of Hot Rods and Dragsters along with signs, jackets, helmets, trophies and more. Two full bars greeted arrivals at the “Hall of Champions” entrance. Giant Sam Wheeler pictures lined one side of the Hall entrance. Everyone was encouraged to grab a Sharpie and leave their marks on the pictures; most did. Sam Wheeler Memorial pamphlets, posters, decals, DVDs, and full-color eight page-booklets that included pictures and a wonderful story by Dick Lague filled tables on the other side of the Hall entrance.

In the “Hall of Champions,” a well-edited Sam Wheeler photomontage played on two giant monitors. In the back of the room multiple tables were filled with food - lots and lots of food. On the other end stood a NHRA podium and seating for probably 100 or so. There were lots of people. Many wore shirts honoring Sam Wheeler, the SCTA, and 200 or 300 MPH Club, and mingled together, talking, eating, and enjoying a drink or three. The mood was light and joyful. Everyone had a story or five.

It was well after three before the Memorial started. With people standing eight deep, lining the hall, there wasn't an empty seat in the house. Reverend Jim Walden gave an opening prayer. Master of Ceremony Allen McAlister followed with a couple of stories and a list of speakers. Lifelong friends, Allen and Sam were very close.

New Southern California Timing Association President Pat McDowell was the first speaker. Like all of the evenings speakers, he praised Sam and his ability to do it all - dream, design, manufacture and drive along with a smile and good attitude.

Sam’s wife of 45 years, Carol Wheeler, was next. She spoke of their life and love - the kids, the challenges, the adventures. A lovely woman, Carol thanked the massive crowd for attending. She expressed with great emotion what so many had said in private: That Sam died doing what he loved, at a place he loved, with people he loved.

Wheeler’s son Ben and his wife Cindy followed with a loving tribute. Sam’s granddaughter Samantha and other family members joined them on the podium. A line of VIP speakers followed. Lifelong friendships, love, respect, and admiration were expressed by all.

Terry Kizer shared that he was the last person to see Sam Wheeler alive. "Sam gave me the thumbs up as I closed the Streamliner canopy," he said. "He had a smile from ear to ear. Sam loved running at at Bonneville."

Sponsor Phelps Wood talked about Sam being more than an employee at his EZ Hook Company. “For 35 years we did everything together. Even now I go to his office and expect to see him there,” he told us.

Sam Wheeler loved speed, engineering, and time, the Reverend Jim Walden told us. His closing prayer reminded us that we are all here for only a short time.

And so life turns into legend. RIP, Sam Wheeler. You will not be forgotten.
Art director Molly Lague - photo from Dick Lague - published by Parts Unlimited and Drag Specialties.
Back to Post