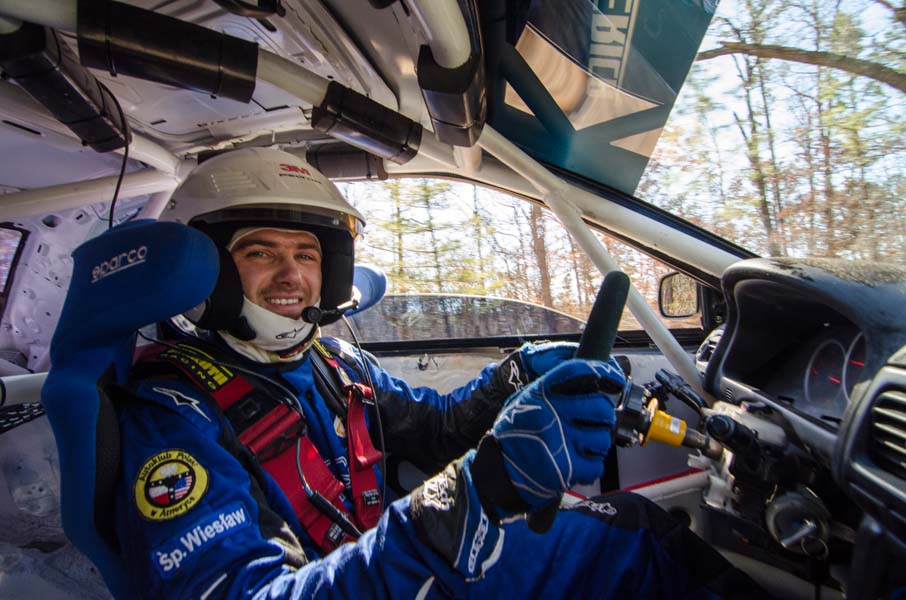 We tag along as the Fetela Rally Team thrashes a perfectly good Subaru through the 100 Acre Wood. Winnie the Pooh would NOT approve.

Scanning YouTube for that next clip of rally race action is addicting and inspiring, but there is nothing quite as humbling as actually riding shotgun while a rally driver applies furious amounts of throttle all the way down a stage. You hit triple digits with trees blurring and you actually come to the realization that you don’t know how to drive. You realize that you have maybe never really driven in your entire life. Your daily life consists of going from point A to point B in a pedal car. Nothing more. No matter how good you are, how much training you may have in some other discipline of motorsport; no matter the time shaved off your daily commute, you realize that you are not as talented nor as brave as the man or woman sitting next to you driving that car at triple digit speeds through the woods on gravel roads.

Piotr Fetela is one of those brave men. He slides the Subaru rally car through cambered bends with gravel and rock pinging and panging on the underside of the car like hail. (Yes, it is hailing under the car.)

Fetela is a Polish rally car driver who resides in Chicago and competes in the Rally America series. He and co-driver Greg Dorman are favorites of a very large, very vocal Polish fanbase who follows the series.  Fetela came to the United States in 2005. A year later he was in a Subaru competing in autocross and rallycross. By 2009 he made his debut in stage rally.

Co-Driver Grzegorz Dorman started rallying in Poland in 1996 with a rear engine rear drive 126hp Fiat. In that first rally he had to save another crew that hydroplaned and had gone rolling into the woods in front of him. He’s been hooked ever since.

Unfortunately Fetela ended with a DNF at this year’s running of The Rally in the 100 Acre Wood, the second rally in the Rally America series. He ran into electrical and fuel delivery issues, but would go on to restart the last three stages after fixing the problem. Fetela won stage 16, beating Ken Block by an ubelievable 36.3 seconds. He even caught fellow Polish driver Arkadiusz Gruszka on the stage. Fetela finished third in open class at last year’s Rally in the 100 Acre Wood.

Fetela Rally Team embodies the true spirit of the sport, as do its fans, and we are grateful to them for giving us a chance to experience the ride along up close.

Check it out in the video below: