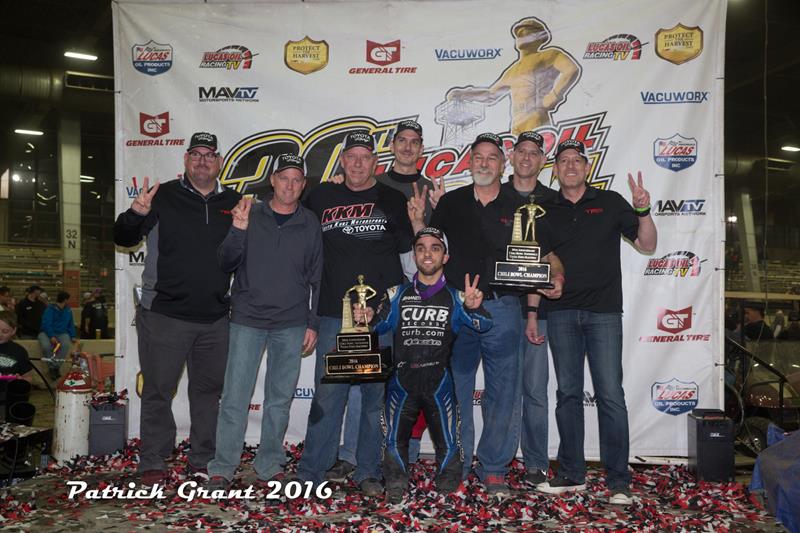 For the second time in as many years, the Lucas Oil Chili Bowl Nationals presented by General Tire was ruled over by California’s Rico Abreu, who wheeled the Keith Kunz Motorsports No. 97 to victory in the 30th edition of the Chili Bowl. With a full house of nearly 20,000 in attendance at the River Spirit Expo Center, the chant of “Rico, Rico” soon followed a series of wicked celebratory donuts.

Giving chase from the fourth  spot, Abreu was among the first of the front runners to test the high groove on the freshly prepped Tulsa Expo Raceway as team mate, Christopher Bell, led the charge until contact with a slower car on Lap 9 sent the No. 71 spinning; sending Bell to the tail of the field.

Handing the lead over to Bryan Clauson, the Indiana shoe for Joe Dooling looked poised to back up 2014 performance, pulling to as much as 2.6 seconds over second place, Zach Daum.

Finding traffic near the races midpoint, Daum with Abreu in tow began chasing down Bryan Clauson. Staying topside, while Clauson wheeled the low groove, the three racers were all very evenly matched at this point. Able to again being pulling away, Clauson sat safely as Rico and Zach began exchanging slide jobs prior to the caution on Lap 43 of 55.

Unable to shake the No. 97 on the restart, Rico plotted his attack. Keeping to the cushion, unless absolutely necessary, Rico was able to grab the lead on Lap 45.

“So I think this is one of the toughest tracks to be a leader at and set the pace,” said Rico. “Just because with how much the track changes in a feature or in a race, you can run second or third, and have the advantage of moving around on the surface rather than being the leader and running the line that you started running where you got the lead at.”

Picking up and taking off, Rico was uncontested the reminder of the way, despite Clauson’s run on the final lap. Bryan Clauson grabbed the runner-up spot with Zach Daum completing the podium.