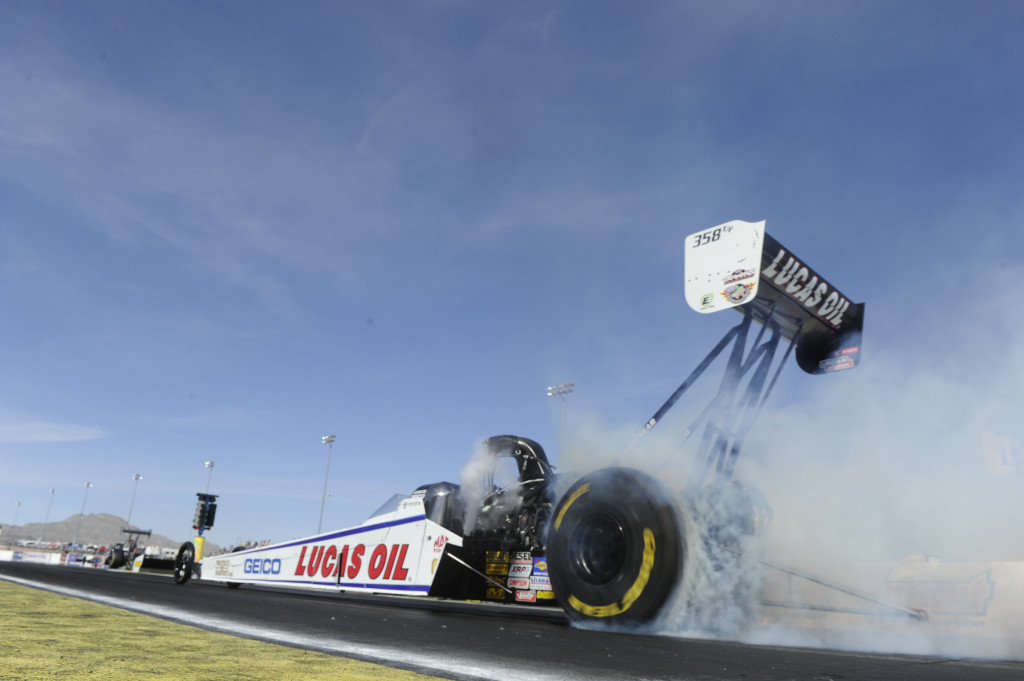 If you look around the sprawling Morgan Lucas Racing shop at this time of the year, you won’t see the Richie Crampton standing around kip blitzing with crew members, but rather if you’re looking for him, he’ll be the one with the welding mask lying underneath framework building his Top Fuel ride for 2016.

Crampton approaches this NHRA season with avid excitement and more motivated than ever. He should after reeling off five wins in his sophomore season, racking up 35-18 win/loss record despite a DNQ in Norwalk, eventually finishing third in the final Top Fuel Mello Yello points tally.

“I had a pretty exciting break out season in 2014 winning two events with one of them being the U.S. Nationals,” said a smiling Crampton. “Going into 2015, I had the idea that I wanted to grow and be a better driver and really try to win races for Lucas Oil and MAVTV and everyone who puts me out there. To have been able to win five events and still to be undefeated in two-wide final rounds of racing that’s definitely the kind of second season that I dreamed about. I didn’t know if I could have ever pulled it off.

“I’ve had the tools and the team and Morgan Lucas has assembled all the stuff and all the appropriate things to go out and try to defend for a championship. To do what we did in 2015, is a testament of just how really good our MLR operation really is and I’m the lucky guy that gets to get in the driver’s seat.”

Now with that third place completion in points, it was like winning a championship within a championship after Antron Brown went on a tear, separating him from the field winning the first three events. Crampton suffered through two first round losses right at the start in Charlotte and St. Louis, slipping down to seventh before winning his first round of the Countdown blindly at Reading after qualifying was rained out. 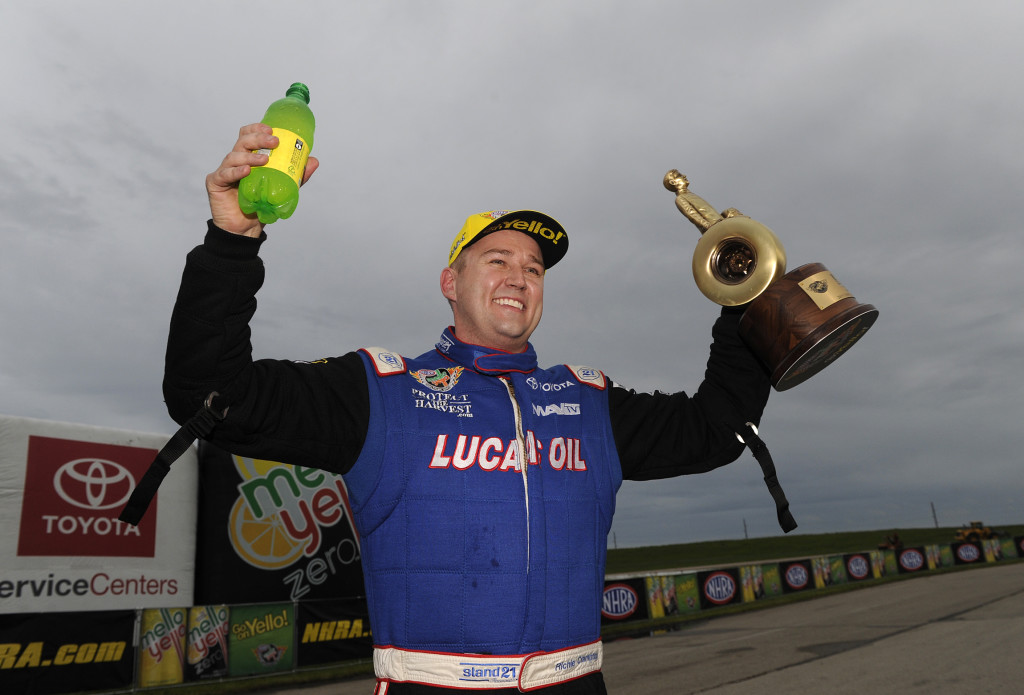 Crampton and his Morgan Lucas Racing team rebounded in Dallas, finally stopping Antron Brown’s streak to perfection in the semi-finals winning against Steve Torrence in the finals at the Texas Motorplex. So, when Pomona rolled around, the points battle between three through 10th was around 80 and a single mistake in just qualifying could have relegated Crampton to eighth.

“At Pomona, it was a make or break weekend for us and we could have finished third or possibly eighth, which would have been disappointing,” said the insightful Crampton. “We knew we had to go a couple of rounds, although we knew the championship was already stitched up at that point by Antron. Actually, I would have finished second, if I had won the event. So, the spread of where we could have finished was pretty broad and I knew I had to be on my game and the car had to be also. We executed well on race day and were able to leapfrog around third. That was a career best finish for me in my young career and the best finish any MLR car has ever produced. It was a pretty cool feeling for me too!”

It was right after the NHRA awards ceremony in Hollywood that saw Crampton and his family winging their way back to Australia early Tuesday morning just in time to rendezvous in his hometown of Adelaide for a moment he would never forget. As part of AC/DC’s ‘Rock or Bust’ tour, it led through his hometown just in time for his arrival. After a few trans-pacific phone calls to arrange, Crampton was on his way to live out his dream.

“It was huge,” exclaimed Crampton. “We had a fantastic 2015 season and topped it off with a trip right after our last event at Pomona back to my hometown in Adelaide and got to see one of the biggest rock bands ever – AC/DC. Were looked after real well by the band’s crew and by Cosmo, their lighting director, who is a big drag racing fan. It was neat to see one of the best bands in the history of rock ‘n roll, especially in my hometown. 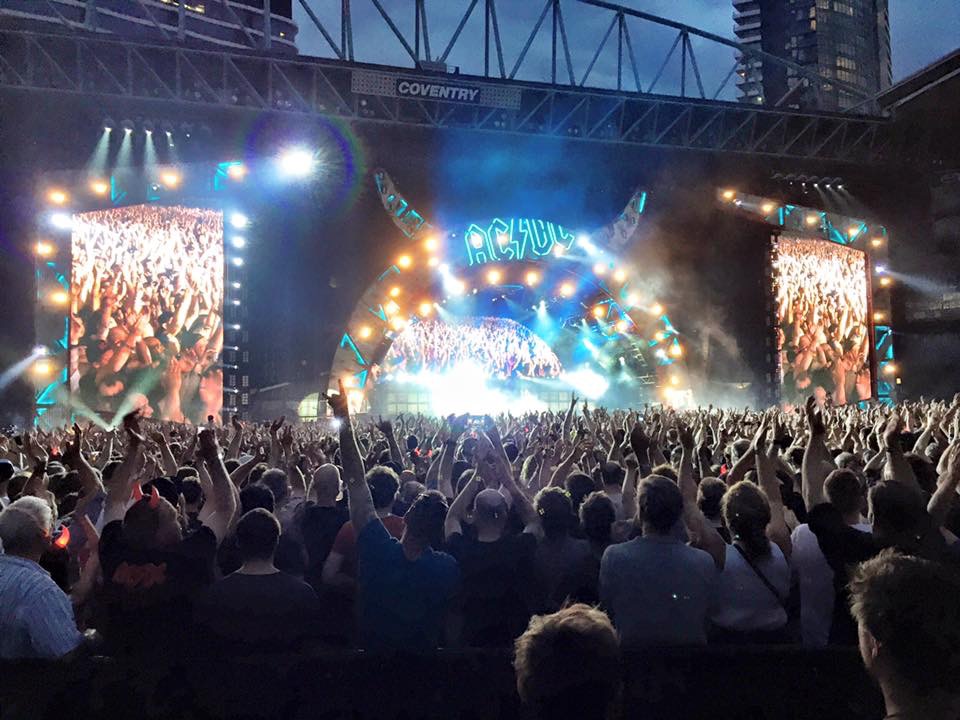 “They blew our socks off – myself, Stephanie and everyone with me. We were all first timers for AC/DC and it was just unexplainable the sound and the quality of the show they put on. You can see why they’ve stood the test of time. It was an amazing experience. Any chance from this point on I get to see them, I’ll be there. As long as they keep touring and can make it happen. They have amazing energy and still want to put on a great show for the fans and you can tell they love what they do.

“One of the guys joining us at the show was Butch Patrick that you will remember as Eddie Munster of the Munsters TV series. That was another huge bonus for me and he has a great knowledge of drag racing and can’t thank them enough.”

Now with all the attention clearly towards 2016, it’s up to Crampton and his diligent crew chief, Aaron Brooks, to steer clear of setbacks and stay focused on the next round in their bid for the Top Fuel World championship. It’s not from a lack of dedication. 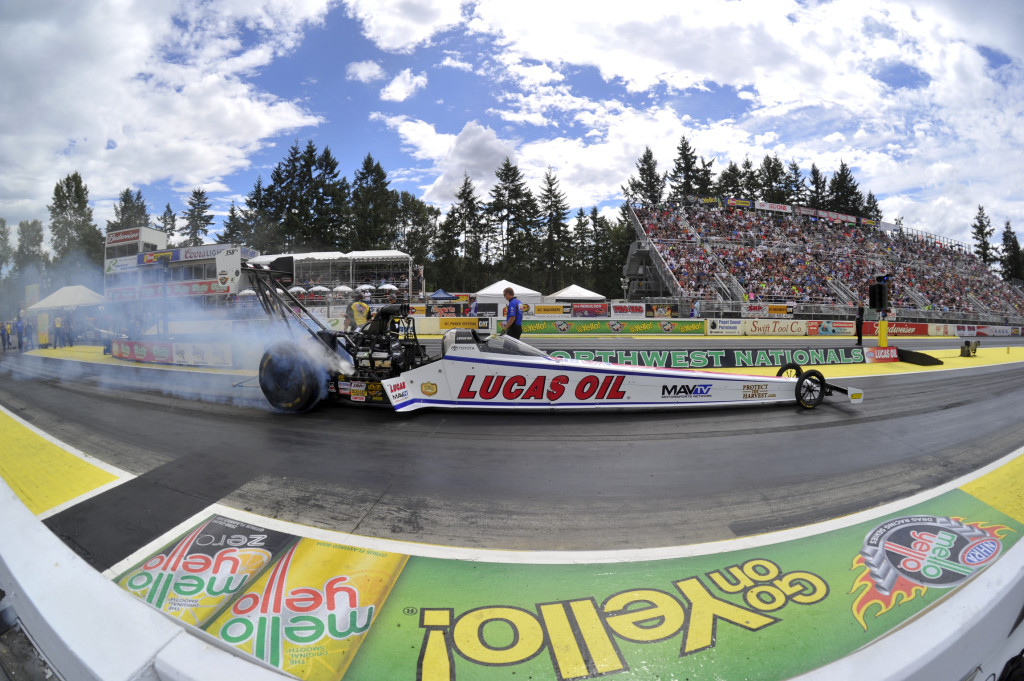 “I moved from a very long, long way away to achieve a one in a million shot driving one of the best Top Fuel cars in the world for a living,” said a grinning Crampton. “It’s a blessing for me and that just keeps me motivated and keeps me hungry trying to put an exclamation point on it and put as much effort in it as I can to try and win. It’s still a pretty big goal and a lofty goal for me to say I’m going to contend for a world championship in only my third season of driving, well, that’s what we’re trying to do. I try to keep everything in check. I know I’m going to have a great race car again. We’re going to try to contend for a championship. That’s what everyone out there is trying to do. I think we have everything in place that it’s going to take. I feel that I’m the weak link, if we have one at all, but I intend to grow as a driver. I think for the Lucas family it would be massive to win the championship. That’s definitely what we’re trying to do.”

The 2016 NHRA Mello Yello series kicks off on February 11-14 for the Circle K Winternationals at the Auto Club Raceway at Pomona.