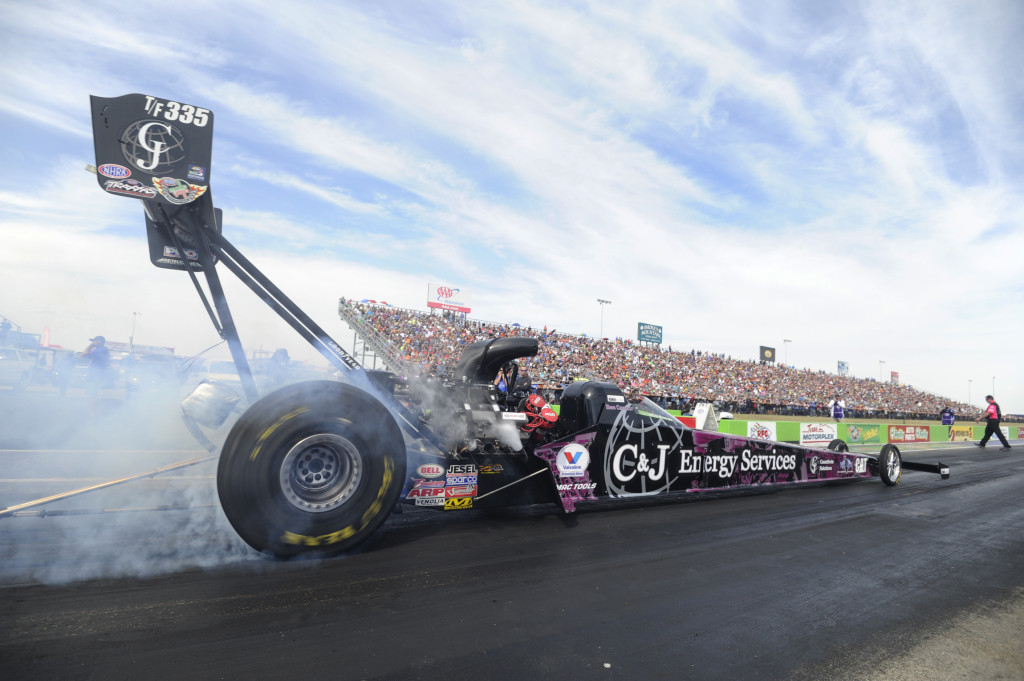 When Dave Connolly took that final deep breath and decided to join Bob Vandergriff Racing’s Top Fuel team in the summer of 2014, he knew that despite having 26 Pro Stock wins, this move was going to be a major change.

As excited as he was to make the switch, his rookie NHRA Mello Yello Top Fuel season started slow, but being a quick study, Connolly marched to three final rounds for the season and looking ahead positively for 2016, it appears the Elyria, Ohio, driver will finally collect his first win in the nitro ranks.

Just as the 2015 season was streaking to a finish in the back half of the year, Connolly began flourishing, reaching the final rounds at Sonoma, Indianapolis, for NHRA’s prestigious U.S. Nationals, and St. Louis. Everyone knew the natural born drag racer would take immediately to the nitro wars, but still being a rookie was beleaguered with 14 first round losses that he had to endure and came out wiser and more dedicated from it all.

“Yeah, it was a lot slower start than we anticipated,” smiled Connolly. “We had to change up somethings to get the team to gel a little better. Making mistakes was just part of what hindered us the first part of the year. Jason McCulloch (crew chief) comes from a lot of successful teams before joining us right after Phoenix. From there this team got progressively better and better throughout the season. That’s what I’m most proud of this year is our growth and personally, I can’t wait to get the 2016 season started. 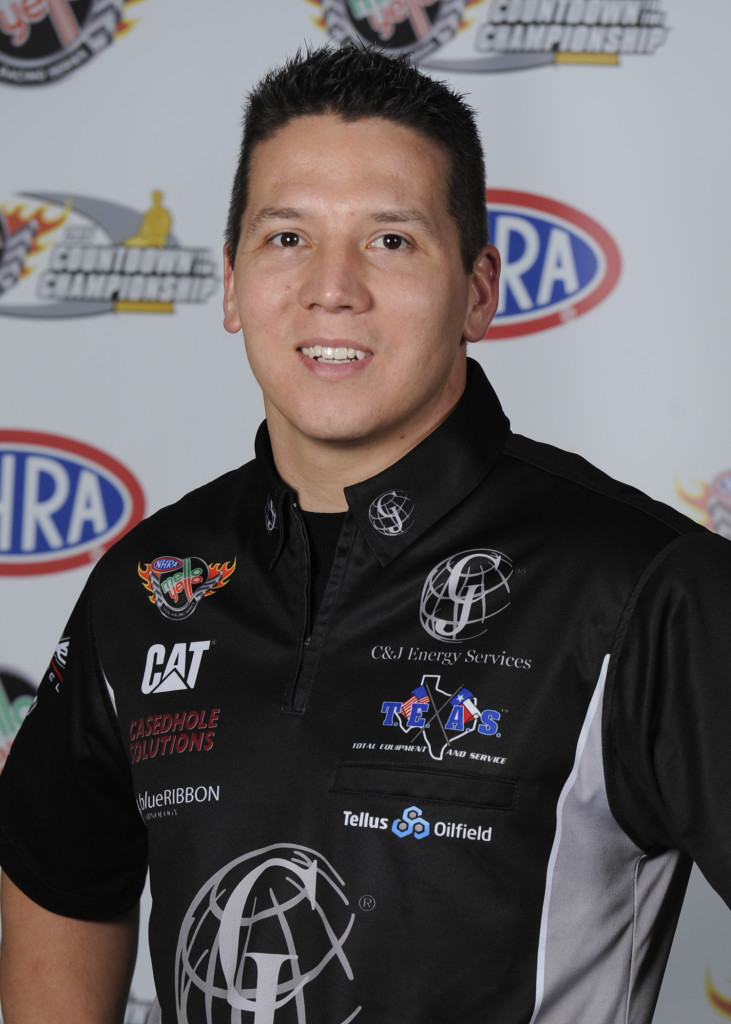 “We stared working with Larry’s crew chiefs, Joe Barlam and Mike Guger right after Norwalk. My crew chief, Kurt Elliott and Jason made some changes to make our car similar to Dixon’s. You know drag racing is a tough sport. It’s easy to get lost.”

Just when it seemed the season was vanquished, Vandergriff gathered his troops and put them on a single path to perfection from the midseason point on.

“But we go from a first round loss and Norwalk (Oh) to Chicago the next weekend and make it to the semi-finals. If it wasn’t for the driver getting left on by a hundredeth or else it would have been an all C&J finals. We lost by one-thousandths of a second (.001). That was really the turning point of our season. Then on to the Western Swing and we make another final in Sonoma losing to Antron Brown. We started filling up our logbook a whole lot more frequently at that point. We were the No. 1 qualifier at Texas, but overall we had some goofy mishaps this year.

“The category all together is crazy. It’s amazing that we can race our cars side-by-side at 3.70s at 330 mph and act like it’s nothing. The consistency is all due to the equipment getting better. I feel we’re going to be a force for next year.”

Now as Connolly reflects back and sees success, although in small quantities, he now understands all about what kind of a ‘Learning Curve’ he would go through to drive among the Kings of the Sport. 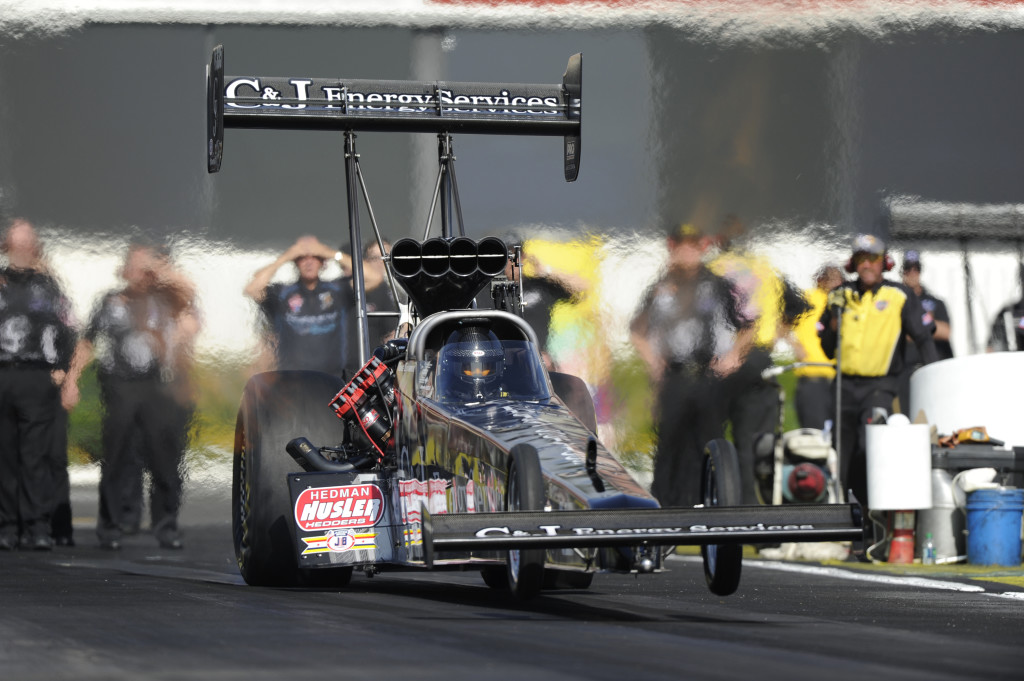 “To be honest with you, there were things that were more of a challenge than I thought they were going to be and there were other things that came a little easier,” he said. “There were so many new adventures; I guess you can say that we went through this year. Whether it was tire smoke, shake; the procedures of doing the burnout, all that had changed for me but everything came together pretty quick.

“It was the things like how fast these cars track and the steering was a bit of a challenge. Really, I have a newfound respect from the driver’s side to what the crew chief and the crew guys go through. It’s a pretty incredible amount of work that needs to be done between rounds. These guys get it done in a timely manner. You’re so dependent on the guys working on the car. Everyone has a role and it’s definitely a team effort getting that car up and down the racetrack.”

For 2016, looking across his BVR pit area, he will see the smiling face of Leah Pritchett taking over the seat from Larry Dixon and also coming on board is Quaker State as an associate sponsor for the season and primary sponsor for Pritchett for five races.

“You know, obviously, I think it’s great,” said Connolly. “Going into 2016, I don’t think there was the funding for two C&J Cars with the economy the way it is and the slide in oil price just proved there wasn’t the funding for Bob [Vandergriff] to be able to pull off running two cars.

“Obviously, with Leah in the seat, it’s great for the class, great for the sport. It’s great for BVR because we have two of the quickest cars out there. The success rate I think is definitely higher when you have more ideas and get twice as much data week in and week out. We’re geared up for two cars and I think it’s going to help us out a lot.”

Looking ahead for 2016 with Pomona starting within weeks, Connolly now begins his second year with a clearer view and knows the driving styles and staging procedures of his own and many of his competitors. Now that all the jitters are gone, Connolly could quickly take the reins of the class just as he did in Pro Stock by adding wins. 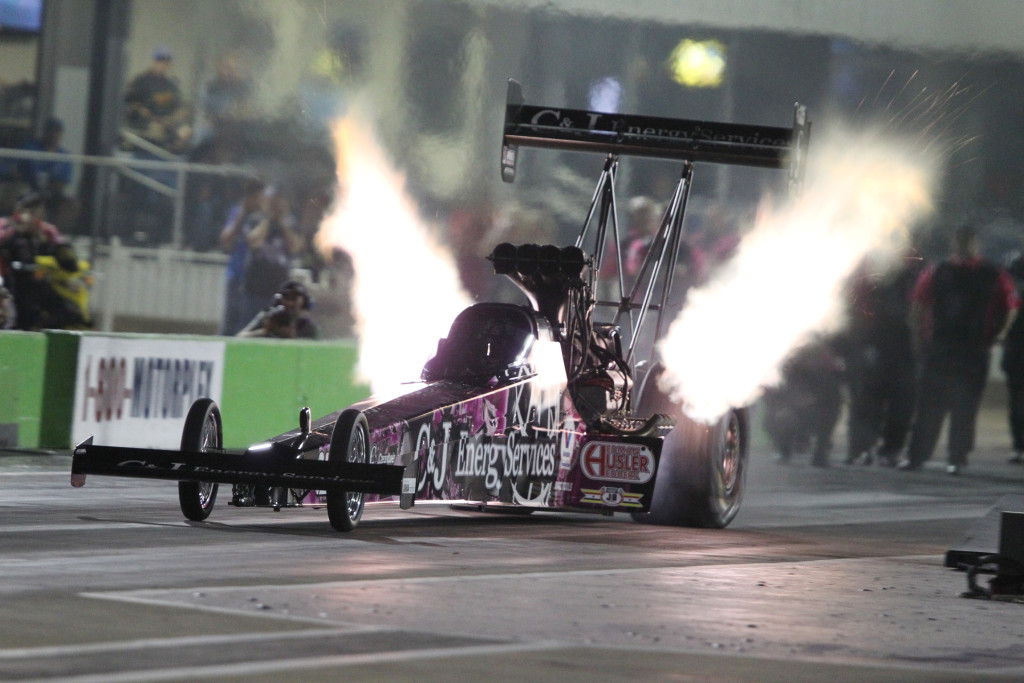 “I’m going to be optimistic and as a team were in nine or 10 finals last year,” Connolly said. “Just the win light didn’t seem to come on in our lane. I know we can win some races and honored to have both cars in the Countdown. There are a lot of good cars out there. Of course, that makes that job a little tougher than it has been in the past. There’s no reason we can’t go out there and race for a championship

“Antron has set the bar pretty high this year. That’s because they did a better job and my hat’s off to them. He outdrove everybody and the team was mistake free for the most part. They made very fast and consistent runs in all kinds of different conditions. I have all the faith in the world with my crew guys. I need to step up to the plate and catch up with Antron. The more we do this, the more we learn.”

The Circle K NHRA Winternationals takes the green light on Feburary 11-14 at the Auto Club Raceway at Pomona.