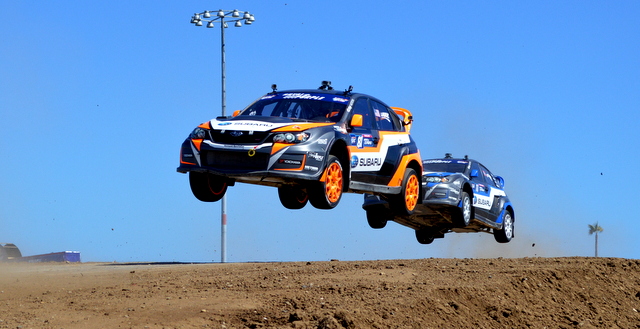 The Red Bull Global Rallycross championship series is a combination of rally racing and wheel-to-wheel action, with 600 HP compact cars flying 70-feet in the air as they battle it out on a mixed-surface course. It’s the perfect formula for appealing to a younger demographic of racing fans, especially with the support of marketing powerhouse Red Bull.

My first experience with Red Bull GRC was during this past weekend’s doubleheader where the Port of Los Angeles played host to rounds 7 and 8 of the championship. And even though the final race was only 10 laps and lasted about 10 minutes, it was the most fun 10 minutes I’ve had at a sporting event in a long time. The 3-wide, door-rubbing sprint at the start, the epic jumps and the close calls all made for an exciting time that didn’t wear out its welcome. It’s a snackable size of racing.

The atmosphere surrounding the event also helps make everything more enjoyable. There are only a handful of event staff making sure you don’t accidentally wander onto the track, but other than that I was free to walk around as I pleased, chatting with different drivers and team mechanics; something that I wouldn’t be able to do at a NASCAR or Formula 1 event.

One thing that was missing from the event was a giant midway filled with vendors trying to collect my personal information in exchange for small trinkets. Don’t get me wrong, I love getting freebies, but I have to commend GRC for keeping the commercialism to a minimum and focusing on racing instead. 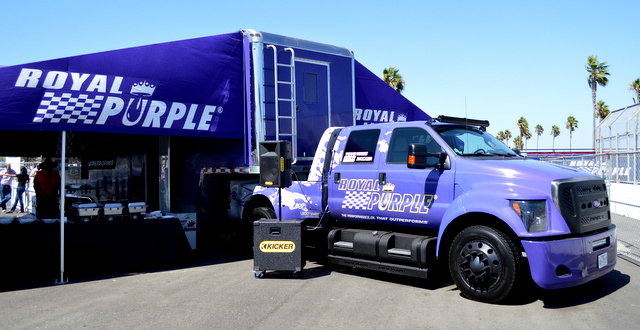 The only manufacturer presence was Royal Purple, the official lubricants sponsor of GRC, and their very purple 18-wheeler. It was nice connecting with them again after spending over a week together on the 2014 Hot Rod Power Tour. They’re really good about keeping in touch with and satisfying the needs of the racing community as their newest XPR 10W-60 motor oil was developed by the request of the GRC teams; they needed something that could better withstand their extreme racing conditions. 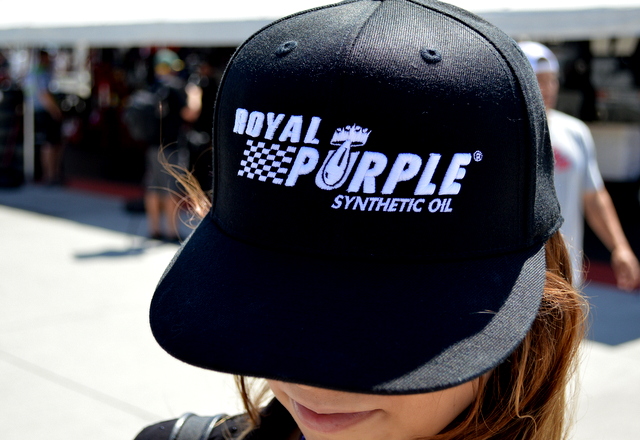 The new viscosity motor oil will be available in stores later this year, but you had to be at the event to score this awesome fitted cap. (Like I said, I love freebies!)

For a series that only launched in 2011, the Red Bull Global Rallycross definitely has all the right elements for success. First of all, the cars that are campaigned are based on attainable production models like the Ford Fiesta ST and Chevy Sonic. Granted the cars are heavily modified, but they’re still more relatable to a younger audience than an unrecognizable formula car. Secondly, many of the drivers are prominent figures in pop culture and have a global reach across social media platforms and YouTube.  Lastly, anything that Red Bull touches usually turns out to be a success because they’re equally about promoting a lifestyle and the sport. Other racing series should take notes—I’m looking at you, Formula 1.

And it’s not that series like Formula 1 don’t know they need to change. They’re aware that ticket sales are down and the community’s interest in the sport is waning; they just don’t seem to know how to make it better. It’s possible that the traditional formats of racing are no longer appealing for today’s youth, and it’s even more difficult to stay invested in the sport when access to drivers and teams is so guarded. I think it’s time to give racing back to the people, and that’s exactly what GRC is doing.

There’s something inexplicably cool about being at a Red Bull sponsored event. Maybe I’ve succumbed to their marketing prowess or maybe I just love getting way more free energy drinks than I really should. Either way, it didn’t feel like a chore to be at the GRC event. They’ve pretty much got the market cornered on creating the ultimate fan experience and that’s OK with me. 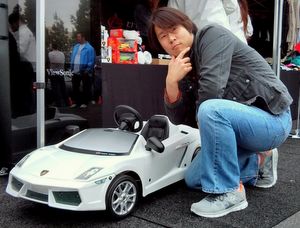 The Junkyard Blog is written by Andrew Chen, Racing Junk’s resident gearhead and amateur car spotter. In his free time, he likes to accidentally do burnouts while trying to activate launch control. He is not good at left-foot braking.