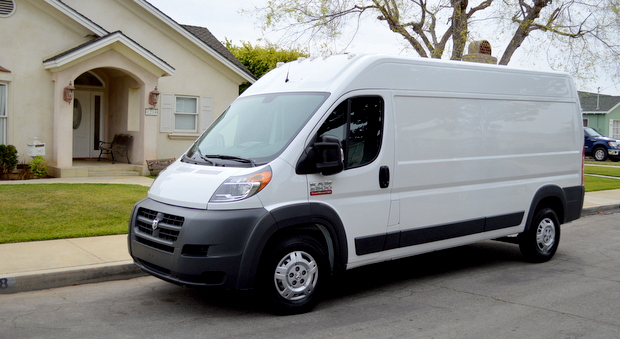 Cargo vans may not be the prettiest vehicles on the road, but what they lack in looks, they more than make up with their ability to do work. My life was made easier by a 2014 Ram 2500 ProMaster cargo van as I used it to move to a new home and support the racing efforts of champion time attack team Will Wattanawongkiri Racing.

Moving into a new place is never a fun task, and it’s even less fun when you don’t have the right kind of vehicle to haul all of your stuff; those fold-down back seats in your hatchback only get you so far. I never knew I wanted a cargo van so bad until I saw what the ProMaster was capable of. 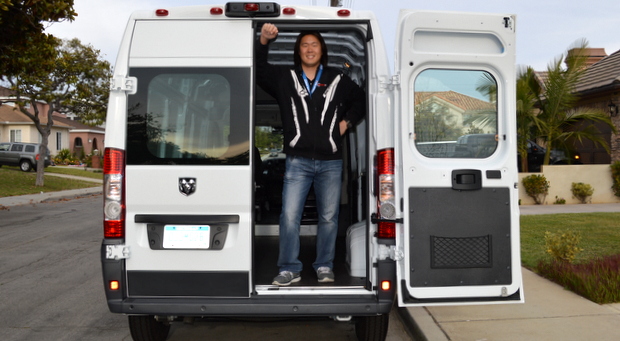 The interior of the ProMaster has been thoughtfully designed for the toughest work. The rear doors open up 260 degrees, resting almost flush alongside the van, and a 90 and 180 degree “lock” keeps the doors from swinging closed when you’re loading/unloading. Vertical space is where this van excels. At 6′ feet tall, I’m able to comfortably stand and walk upright inside the cargo area. The sidewalls are constructed at almost a 90 degree angle, making it easy to stack boxes or secure a mattress, in my case. The floor is a non-slip, finished surface that’s smooth enough to slide items around with ease.

The 21-inch floor-to-ground step-in height is perfect for effortless entry and loading. It didn’t take many trips to the van for my lower back to fully appreciate not having to bend over repeatedly. The rear doorway is 60-inches wide and the sliding door offers a 49-inch opening. Both access points are large enough to fit standard pallets, which means a forklift can help make your work that much easier. Unfortunately, forklifts aren’t normally roaming around narrow residential streets, so it was just up to me and my poor friends that I conned into helping me move.

We tired out long before we used up the 530 cubic feet of cargo space. It’s as if the van was taunting, “that’s all you got for me, bro?” Of course we didn’t tip the scale at all for the vehicle’s 4,430 lb load rating.

Driving the van was surprisingly easy. The 280 horsepower 3.6-liter V6 responds quickly to throttle inputs and a six-speed automatic transmission offers smooth driving thanks to smaller steps between gear ratios. The smoothness of the transmission is especially showcased with a heavy cargo load; it was easy to keep my furniture from jostling around during transit.

Adding to the ease of operation is the ProMaster’s excellent visibility. A higher seating position, large front windshield and short nose allow for a wide view of the surrounding environment. With the mirrors properly adjusted, there was no need to turn my head to check my blind spot, so not having any windows along the side panels wasn’t an issue.

Keeping the van from turning into a runaway freight train is a set of Brembo brakes with thicker brake pads. And thanks to terrible L.A. drivers that like to cut-off giant cargo vans, the Brembos had plenty of opportunities to show me just how well they perform. Having these performance brakes as standard equipment is the right move because the last thing you want is brake fade while carrying a heavy payload. 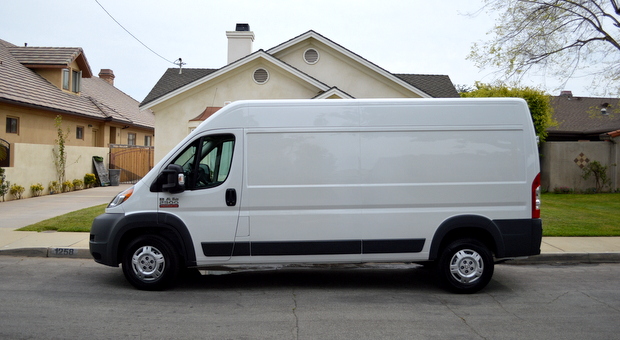 The only downside to having such a large van in an urban environment is parking and clearance. At 101 inches tall, the ProMaster won’t make it into most parking structures, and finding a two car-length parking space along the curb can be quite a challenge after work hours. But if I’m able to find a spot, parking this beast is simple. Honestly, I can parallel park this van better than my own car thanks to the wide-angle side-view mirrors, the rear camera and its excellent turning radius.

With my move complete and the daunting task of unpacking looming, I did what any procrastinating car-lover would do: turn the ProMaster into a race support vehicle. 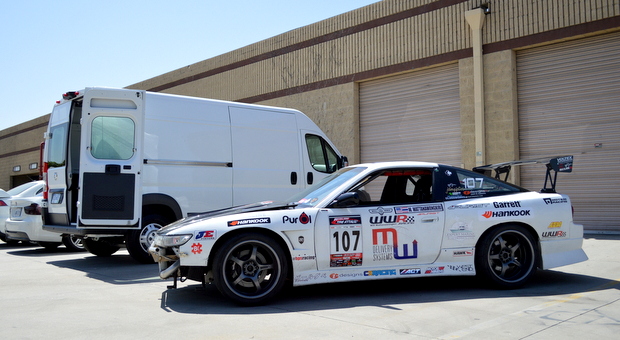 I met up with 2013 Global Time Attack Champion Will Wattanawongkiri and loaded up a bunch of gear for a test day at the track in preparation for the first race of the 2014 GTA Pro season at Road Atlanta. And just like with my move, the ProMaster swallowed up everything we could throw at it: spare tires, gas tanks, jacks, tool boxes, the car’s front end, etc. With a little bit of work, it could easily be transformed into a mobile workstation for tire mounting or even engine building.

Be sure to follow Will on his Facebook page as he looks to defend his championship status across a multitude of time attack series. 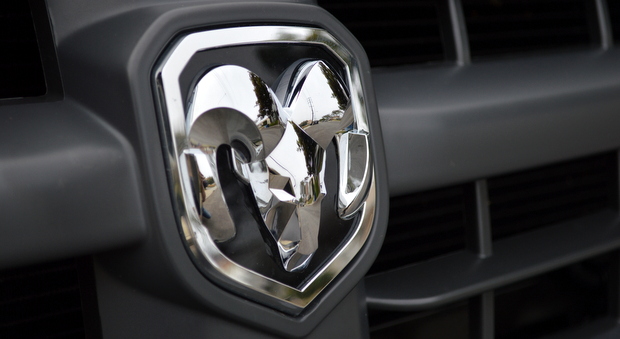 Overall, the Ram 2500 ProMaster is a well-built and capable workhorse that never quits. It’s a versatile vehicle with usage opportunities that extend beyond just work, and it won’t leave you feeling like you’re stuck driving a school bus. If your hauling demands have outgrown a pickup truck, the ProMaster is definitely a viable option.