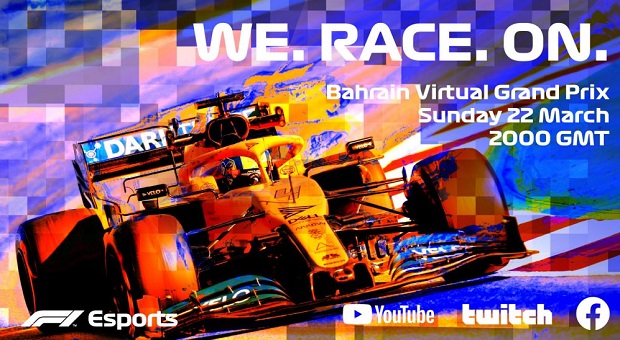 Motorsports is adjusting to the times.

There was racing this past weekend, albeit in a virtual manner, as IMSA, NASCAR and Formula One geared up on the iRacing and YouTube channels, as well as on cable – NASCAR eRaced on FS1 – to give gear heads the fix we all needed. And it’s only the beginning.

IMSA’s SuperSaturday had a total of 50 entries, was held where it would have been anyway – Sebring International Raceway – and had a winner from a real, not virtual, team. Bruno Spengler, who began racing with BMW’s factory Rahal Letterman Lanigan Racing (RLLR) IMSA team this year and finished fourth in class in the 2020 Rolex 24 at Daytona, won Saturday’s iRacing SuperSaturday eRace.

It was a 1-2-3 sweep for the Bavarian manufacturer in the 90-minute contest over the virtual 3.74-mile Sebring racetrack. Spengler took the win in the virtual No. 25 Team Red BMW M8 GTE over teammate Nicky Catsburg in the No. 26. Canadian Spengler passed Catsburg in Turn 7 just about five minutes into the race and never let up en route to the checkered flags, finishing 3.173 seconds ahead of the second Team Red BMW.

Jesse Krohn, in the No. 24 BMW Team Black M8 GTE, finished third. Krohn was part of the winning team that drove to victory on the Daytona track in January, beat former Lexus driver Sage Karam, driving a No. 8 Porsche 911 RSR. Krohn overtook Karam with just about an hour remaining and preserved BMW’s podium sweep, just 11.746 seconds behind Spengler.

“It’s very special, because starting the race event, you feel the pressure building up,” Spengler noted. “It’s definitely real racing; I was sweating a lot and Nicky was pushing a lot. We have to underline the fact IMSA organized this event with so many incredible cars and drivers at Sebring – thanks to all involved for setting this up. Passing start/finish, I had goosebumps,” Spengler admitted. “I was almost screaming on the radio!”

This eNASCAR Racing Pro Invitational racing had much of the action we normally see on television, but it wasn’t possible to replicate the sounds, smells and visual blurs of cars at speed. We did get the Big eOne from seven-time champ Jimmie Johnson and we had the customary on-air pairing of Mike Joy and former NASCAR Cup champ Jeff Gordon. Stewart-Haas No. 14 racer Clint Bowyer provided the comic relief he employs on a daily basis, even while racing to 16th place.

Beyond the winner and second-place racer, fans were treated to eRacing from Kyle Busch (his first iRacing experience), Brad Keselowski, Joey Logano, Erik Jones, William Byron and Austin Dillon. Fans could also root for Cup racing underdogs like Garrett Smithley, who held pole position for Rick Ware Racing, and Timmy Hill from Carl Long Racing. Between them, this duo led laps from 68-95 before being overtaken by Earnhardt Jr., who led until being passed by Hamlin in typical door-banging NASCAR style.

Hamlin, it should be noted, now has 31 career iRacing victories in 164 starts on the simulation service. For his part, Hamlin wasn’t sure he could use the newer tires to his advantage but his typically aggressive work behind the virtual wheel paid off. “I really wasn’t sure that we were going to be able to get back there,” he said. “With 10 to go, we were outside the top 10 and bottled up, but I was really able to make the top lane work over those last two laps to be able to make up ground and get the win.”

Vandoorne and Eng should be familiar to race fans and McLaren’s Lando Norris (fifth), Williams’ Nicolas Latifi (sixth) and Racing Point’s Nico Hulkenberg (10th) have appeared on true Formula One grids. Reigning champion Lewis Hamilton’s brother Nicolas raced, as did former driver Johnny Herbert. Only a few teams put out press releases after the event – unlike the NASCAR teams and BMW Motorsport – and Eng’s comments for Aston Martin Red Bull showed the reality of competition in the virtual world.

After taking pole position for the race and earning third, IMSA BMW regular Eng said, “Pole was a great achievement as I don’t really play this game very often, but I was struggling a bit to make the strategy work in the race. Somehow my pit stop took a little too long and I think I didn’t de-select to repair the damage. A podium finish was a good start and now I have a good base, so I’m happy to be back driving for the team anytime.”

Will he get the next chance when F1’s e-competition resumes April 5 as racers contest the second Virtual Grand Prix of the year at the Australian Grand Prix circuit in Melbourne? The action will be shown on F1.com.