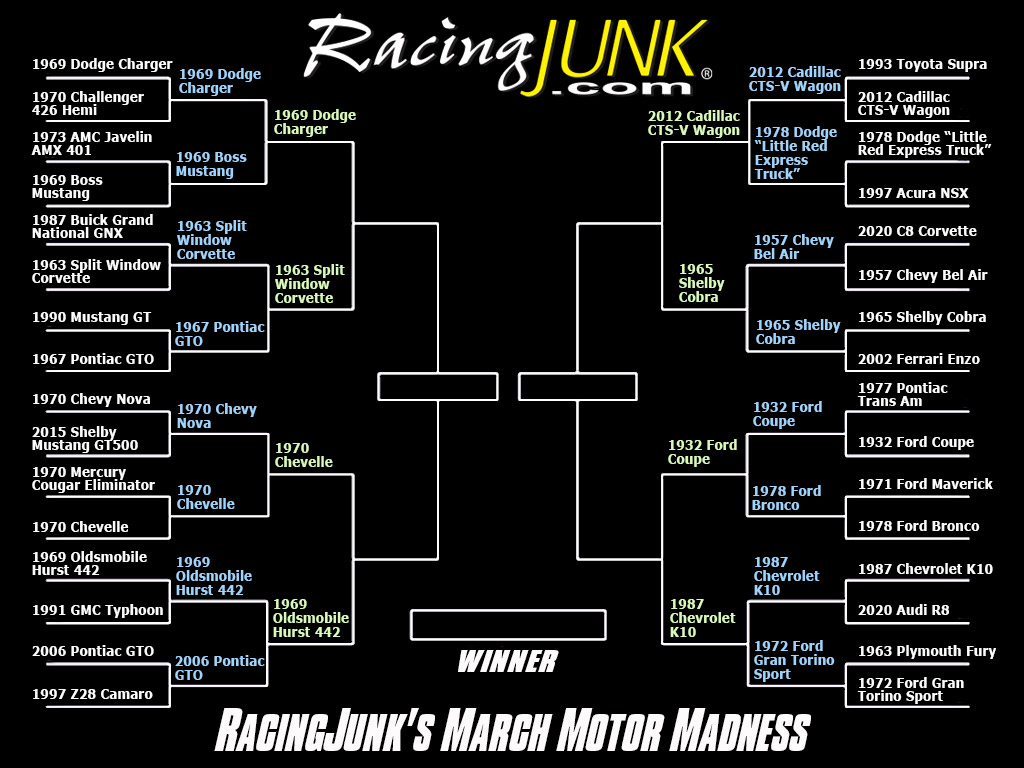 The Boss Mustang had one of the most dominant wins of Round 1, but it could not keep up with the 1969 Dodge Charger’s firepower in this Sweet 16 match-up. The ‘69 Charger is one of America’s most popular muscle cars, but it will still be considered an underdog against the iconic 1963 Split Window Corvette in Round 3.

Our users edged out the Split Window Corvette ahead of the ‘67 Pontiac GTO in this match-up. Pontiac’s only old school contender has been eliminated. Look for a tighter match-up for the Corvette against the dark horse 1969 Charger in the Elite Eight.

One of the more intriguing Sweet 16 match-ups was the 1970 Chevelle versus the 1970 Nova. Both same year Chevy models, which had to make it tough for GM die-hards. Surprisingly the Chevelle almost doubled the Nova in votes, ending the popular classic’s run.

Continuing the popular trend of this bracket, the old school 442 dominated the more modern ‘06 GTO. Both cars had options around 400HP coming out of the factory, but that wasn’t enough for the Pontiac to put up a fight. The Olds 442 has a tough match-up against the Chevelle in Round 3.

The two biggest under-dogs of the bracket left in a head to head bout here.  The fight ultimately ended in the CTS-V Wagon being victorious, but the Caddy is in for it’s toughest match-up yet against the Shelby Cobra in Round 3.

The legendary 1965 Shelby Cobra’s run continues as it edges out Chevy’s widely popular 1957 Chevy Bel Air to advance into the Elite Eight. The Cadillac CTS-V needs a miracle to beat the Cobra in Round 3, watch for the Shelby to coast into the Final Four.

Hot-rodders would not be topped by our offroad gearheads in this Ford head to head match-up. The ‘32 dominated across all voting platforms to set up another fight against an offroad contender; the 1987 Chevrolet K-10.

Our closest match-up of the Sweet 16, the Chevy K-10 barely beats the Ford Gran Torino Sport by under 200 votes. Offroad enthusiasts have a tough match-up ahead, as it takes on the 1932 Ford Coupe in Round 3.

Voting for Round 3 here: