Round 1 of RacingJunk’s March Motor Madness is in the books. Muscle cars dominated the opening round as they now account for 50% of remaining contestants. Other notables included both of the offroad contenders; the ’87 Squarebody Chevy and ’78 Ford Bronco advancing, while every supercar was knocked out of the competition! 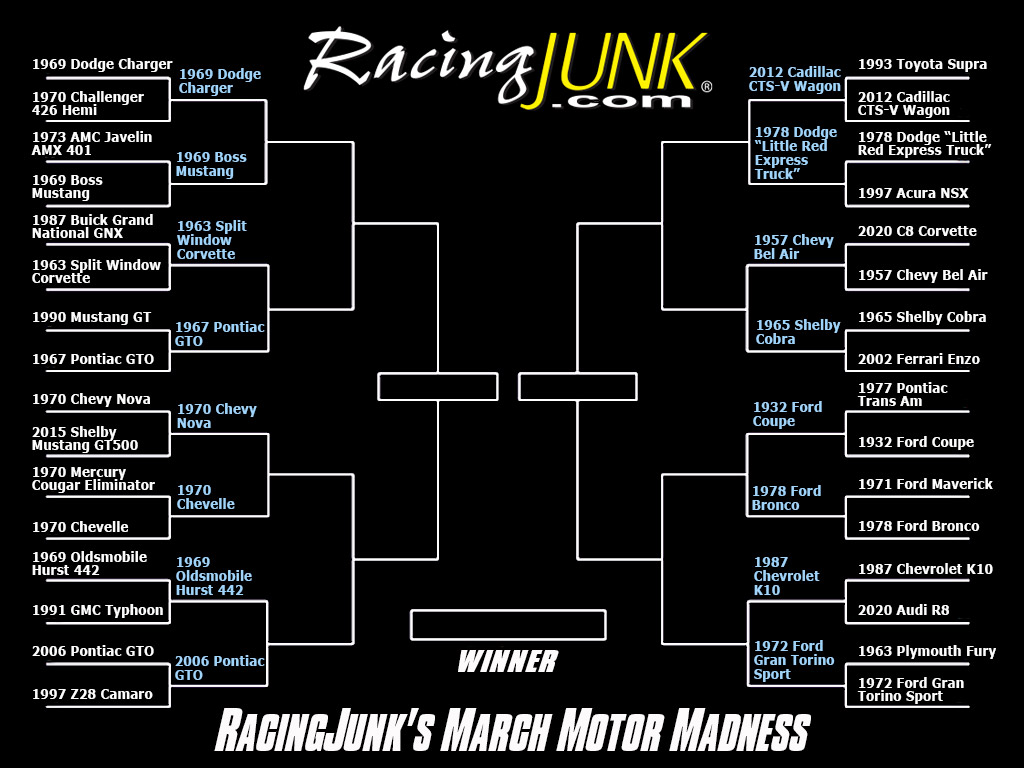 Mopar-lovers must have had a tough time with this one, but the ‘69 Charger could not be topped as it makes it’s way into the Sweet 16.

The Boss Mustang dominated the Javelin from start to finish across all voting platforms, gathering one of the biggest wins of Round 1. Ford fans have an undoubtedly tougher match-up in Round 2 against the ‘69 Charger.

G-body lovers tried their best in this Round 1 bout but couldn’t overtake one of Chevy’s most iconic models, the Split Window Corvette. GM enthusiasts have a tough Round 2 choice between the ‘63 Vette and the ‘67 GTO.

Foxbody cars are one the most financially accessible models for classic car and race enthusiasts alike, $10,000 will get you a complete and gorgeous car 9 times out of 10. That doesn’t mean it stood a chance against the godfather of muscle, the ‘67 GTO. Pontiac took this one easy, a surprise to no one.

Old school muscle vs new school technology, which dominates? We asked what our users wanted in their garage and they responded: the 1970 Nova dominated this one start to finish, proving old school still reigns supreme. The Battle of 1970 awaits Chevy fans as this win sets up ‘70 Chevelle versus ‘70 Nova in Round 2.

The Chevelle delivered the biggest blowout of the round with this win. The Cougar Eliminator is a fantastic model in it’s own right, but it stood no chance against the name recognition and history behind the Chevelle.

One of the closest head to heads of Round 1 was the ‘06 GTO versus the ‘97 Z28. Both of these cars left the factory with 6-speed manual options, but the 400HP accompanying the Pontiac likely helped it edge out a close victory.

The holy grail of tuner cars couldn’t top Cadillac’s 556HP station wagon, a result that definitely came as a surprise to some users. Caddy has a tough match-up in Round 2 against Dodge’s 1978 Little Red Express Truck.

This was the tightest match-up of Round 1. Acura’s widely popular 1990s supercar just didn’t have the juice to beat Dodge’s Little Red Express Truck. The Dodge pickup was one of their most unique trucks to date when it began production in 1978 and it was also the fastest American vehicle from 0-100mph that year according to Car and Driver magazine.

We heard a lot about this match-up from Chevy Lovers. The ‘57, one of the most beloved classics versus the C8, their most modern performance option. Ultimately old school wins once again as the Bel Air edges out the mid-engine Vette.

Ford beats Ferrari in this Round 1 match-up as the Cobra beats the Enzo easy. Shelby enthusiasts will have a much tougher time against the iconic ‘57 Chevy in Round 2.

Ford edges out a close win here. The Bandit would be disappointed but he can’t argue against the 1932 Ford Coupe deserving to move on to Round 2. Hot Rodders have a tough match-up against our offroad gearheads in Round 2 against the ‘78 Bronco.

This head to head introduced the first match-up with a true offroad contender in our bracket. Ford’s iconic Bronco edged out their 1970s Maverick in this close win moving it on to Round 2 against the ‘32 Coupe.

Our second offroad contender, the Squarebody Chevy K10 took down Audi’s powerhouse R8 supercar in a close victory, making it official that no supercar moves on to Round 2.

Ford claimed another commanding victory as the Gran Torino Sport beat the Plymouth Fury on all platforms. Expect a much tougher match-up in Round 2 against the Squarebody Chevy.

Vote for your Round 2 favorites here: