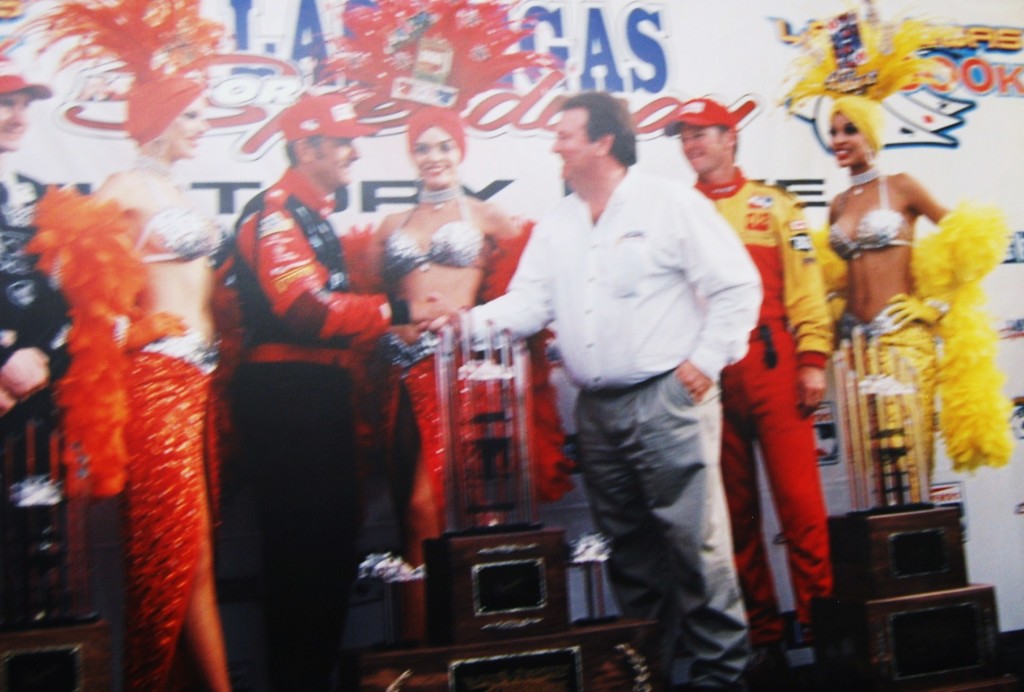 Richie Clyne and Chris Clyne have racing in their blood.  Richie conceived and built Las Vegas Motor Speedway during the early- to mid-1990s.  His son Chris raced their and at other venues.  Chris Clyne still has a couple of racing cars tucked away inside Clyne’s Cars, their new father-and-son business.

Located in North Las Vegas near the Speedway that he built, Richie Clyne found the perfect building to house his far-flung enterprise.  The large gray building with red trim features officies (and an antique barber shop) up front, a cars-for-sale showroom, and a large shop area where Clyne’s staff works on anything from classic cars to ancient, dinosaur-like fire engines to midgets, dragsters, or circle track cars.

As might be expected, the building is decorated from one end to the other with automobilia, a great deal of which is related to racing.  An unusual branch of Clyne’s Cars is a sign and graphics studio that turns out everything from race-car graphics to poster-size photos of Clyne with drivers he met in the Winner’s Circle at Las Vegas Motor Speedway.

The Clynes’ racing collectibles range from two wooden hydroplane racing boats from the 1930s to a mini dragster stored on pallet racking in the back shop.  He has a couple of quarter midget cars on display, along with some racing-themed kiddie rides and arcade games.  Chris Clyne’s name is lettered on many of the smaller racing cars that he drove at a young age.

Sections of racing cars mounted on the wall, posters from the Monaco Grand Prix and a pair of circle track cars that Chris Clyne competed in round out the racing end of the business.  The shop also services, restores, and sells antique and classic cars.  It is located at 4225 Production Court in Las Vegas.  Cal (702) 686-1469 for information.