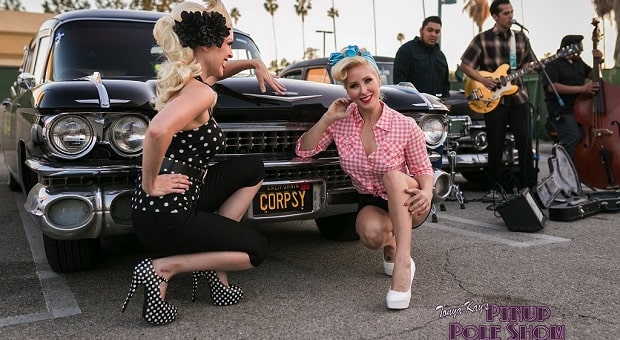 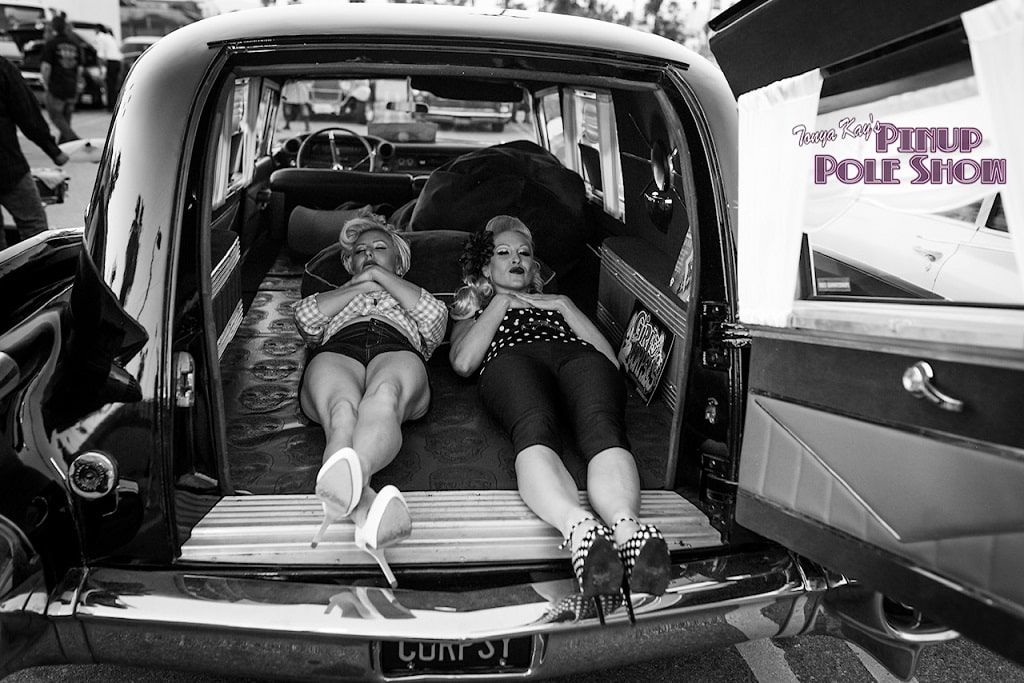 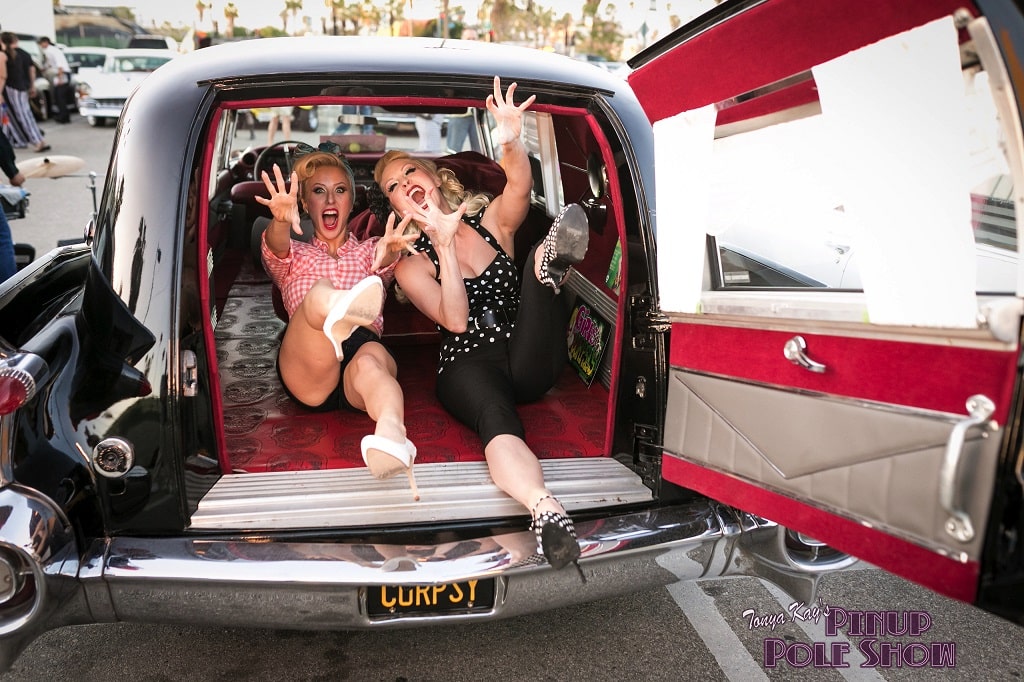 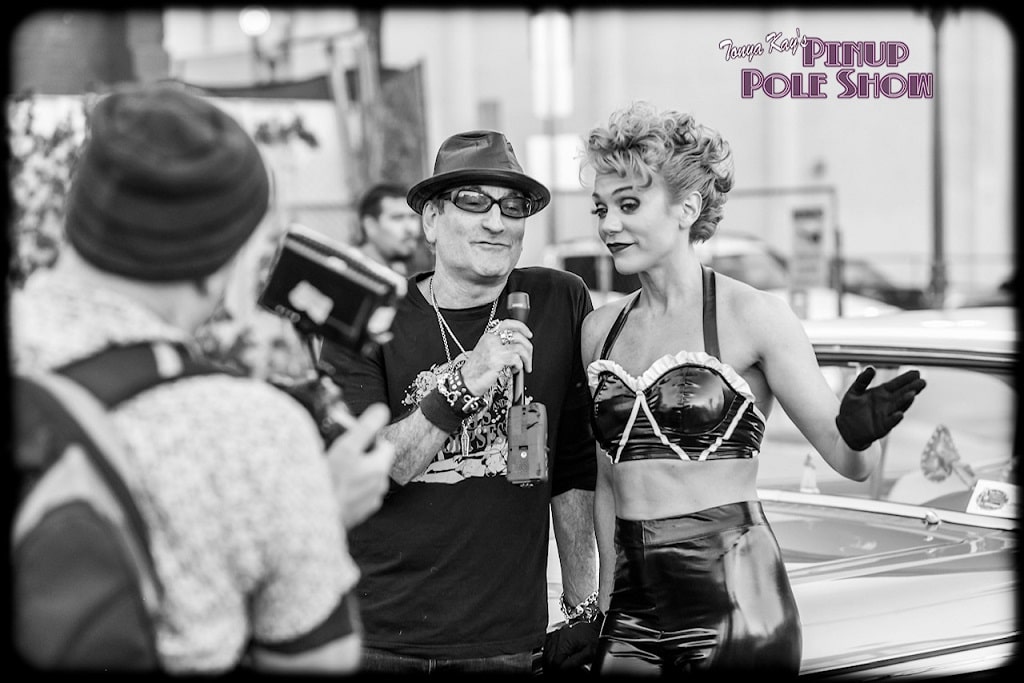 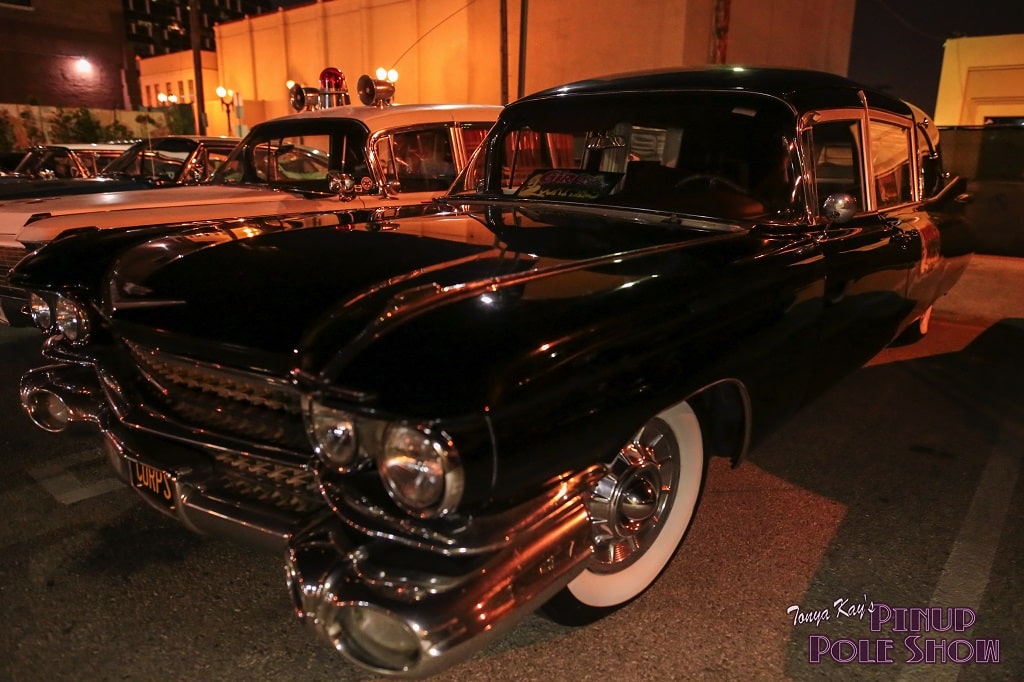 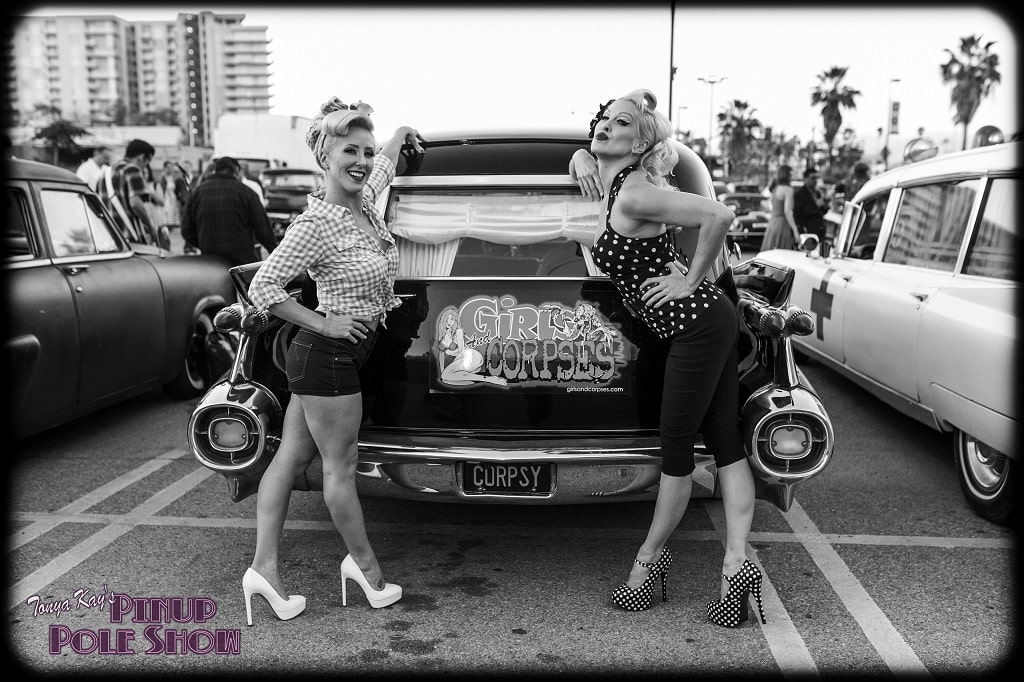 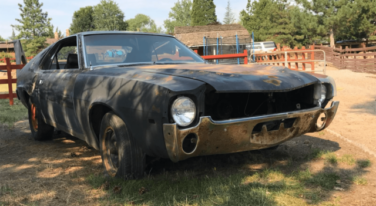 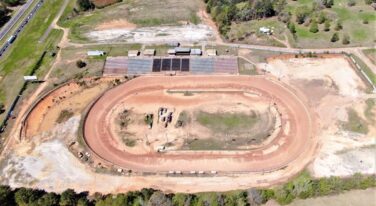 It’s always a party when Robert “Corpsy” Rhine brings his hearse to Tonya Kay’s Pinup Pole Show. That classic vehicle’s personality is as big as its owner's, and my models love climbing in and out of this beautiful restoration. Today’s Pinup Pole Show Pinup of the Week features both Heather Lou and Tiffany Rose, posing with Corpsy’s 1959 Cadillac Hearse, Miller Meteor, with photography by Shane Karns at Tonya Kay’s Pinup Pole Show. Let’s find out a few things we didn’t know about this breathtaking classic car from the car owner himself, Corpsy, a film producer, magazine publisher and macabre Hollywood personality!


TONYA KAY: Why do they call you Corpsy?

CORPSY: Because I'm a corpse, of corpse. No, really. When I was ten years old I died from a massive skull fracture. I flatlined for a moment and my parents thought I was a goner. But I came back, gulp, I guess to create Girls and Corpses Magazine. However, I spent all of fifth grade in the hospital. I roomed with a cool roommate and buddy who I nicknamed Fat Albert. He was in the hospital because he was ‘morbidly obese' (and weighed over 400 pounds). Today he would be almost ‘normal' for America. I wrote a book years ago titled 'My Brain Escapes Me,' which is all warped stories from the depths of my damaged brain (with an X-ray of my skull on the cover from when I was in the hospital). It wound up in major book stores, Barnes & Noble, Borders, etc. and is still sold on Amazon. When I started Girls and Corpses Magazine, Corpsy became the ‘mascot’ for the magazine and people from all over the world would mail me, Corpsy. The name stuck and more people know me as Corpsy than as Robert.


TONYA KAY: What drew you to buying a classic hearse?

CORPSY: Older hearses were beautiful pieces of classic American artwork, and the coolest and most beautiful of all: the 1959 Cadillac Hearse, Miller Meteor. Only 400 were made of this model, so it is highly collectable. It’s hard to say how many are even still around, even less in near the condition of the one I restore with my friend Nick White. Of corpse it made business sense to have a hearse to take to events and it has been a huge hit parked right in front of the Pasadena Convention Center, for example, and The Marriott Hotel (on the sidewalk), Burbank Car Show and Tonya Kay’s Pinup Pole Show. I also rent her out through Picture Car Warehouse.

It has been in films, photo shoots and music videos. It was featured in George Clooney’s directed Cohen Brothers movie 'Suburbicon.' I got to go out on the set with Matt Damon, Julienne Moore and Clooney. If you build it, they will come… haha! I get asked if I am creeped out to own a hearse, but it’s the opposite. I love her and feel more alive when driving around in her and going to a myriad of events where people gawk and fawn over her. I also used the hearse prominently in my film, coming out later this year, titled 'Exorcism at 60,000 Feet,' staring Lance Henriksen, Adrienne Barbeau, Bai Ling, Robert Miano, Kelli Maroney and Corpsy, of corpse. The hearse won first prize at the GM car show in the Cadillac Division 2018.


TONYA KAY: Tell us a funny story about owning your classic car.

CORPSY: Well, when you are restoring an old dilapidated vehicle, there are plenty of stories and struggles and scammers. They are not so funny at the time though. When the hearse was still mechanically struggling (it took two arduous years to complete the restoration) and I had not yet removed the engine to be dipped and cleaned, the hearse would belch out huge BANGs from the back like gunfire, scaring everyone to death. And if that’s not enough, I put a train horn in it which can cause a heart attack to anyone standing in front.

One time I was driving home from an event in Pasadena and the hearse was behaving badly, stalling constantly, and I was white-knuckling it home on the freeway. Well, I didn’t make it. The engine died on the freeway. I rolled up the off ramp at Brand exit in Glendale and barely made it to the top of the ramp, and that was all she wrote. It was a Saturday night and a very busy ramp. Fifty cars were blocked behind and could not exit and it was getting really nasty. No one seemed to care that this was a classic hearse stalled in front of them and were telling me to “Get that piece of shit off the road, etc. etc.” Well, one kind fellow, a transient, helped me push it (no easy feat with the 3 ton 20 foot long beast) up the off ramp and across Brand boulevard to a slightly better location by the side of the road.

I called Triple A but the woman on the phone said it was a busy night and it would take well over an hour. So, thinking quick, I said the hearse was in a dangerous spot and could they please hurry. She paused and then said she’ll have to call the police because I am in a precarious spot.

Now, I am back-peddling like crazy, saying, “The hearse is really ok, really. Please don’t call the police,” I implored. But she insisted she would have to report it. And so now I’m waiting for the cops and knowing they will be giving me a big fat ticket. Well, minutes later the police arrived. Two offers got out of their squad car and strolled up to the hearse, eyeing the vehicle. I was ready for the worst when they cop said, “That’s a ’59 Cadillac, right?” I nervously nodded. And the senior cop added, “Miller Meteor, right?" I nodded again. He slowly shook his head and said, “That’s my favorite year! Can I take a photo?" Well, from then on, all was good and they waited with me until the tow truck arrived and chatted about vintage cars. You never know when a car enthusiast will stroll up.

CORPSY: Well, it’s a 1959 Cadillac El Dorado which was taken to an aftermarket cut plant to chop her into a hearse. The plants which sawed the Cadillacs in two, then extended them and turned them into hearses were Eureka, Superior and Miller Meteor. All three are highly collectable. Everyone has their favorite but mine was and has always been the Miller Meteor. The tail fins are the largest ever to appear on a production car in America. 6.3-liter V-8, good for 320 horsepower. Ghostbusters fans will remember this car as the Ecto-1 from the Bill Murray original film. So, if I hadn’t purchased the rusted frame and trashed interior from my friend Nick White, it would have likely been converted into a white Ectomobile.

But I didn’t want to do that. I wanted to restore the hearse to an off-the-line original as much as possible. But I did admittedly add a few things that were not on the factory model, such as air-conditioning, seat belts, an extra side mirror, back up camera, security system, remote key starter, Blue-tooth, eight speaker stereo and a train horn. This Miller Meteor model hearse was also known as a three-way, not for the reason you are thinking but because there are are tracks inside the back which can electrically pull a coffin in through either the back or right door or left door. Very convenient for body pickups at mortuaries and funeral homes. There is also an electrical plug above the radiator. I couldn’t figure out what it was used for until a friend from back east told me it was used to plug in a small heater to put over the engine on freezing days to warm the engine before a frigid start. Back in 1959 you could purchase one of these hearses for around $7,400. Now, one restored like mine would run you between $75,000 - $150,000.


TONYA KAY: Where can we see your work (and car) next?

Stay tuned. We are always doing events. I will be at Mid-Summer Scream in Long Beach August 3rd and 4th signing at my booth with my friend Bill Moseley (The Devil’s Rejects) who is also in my films 'Cynthia' and 'Exorcism at 60,000 Feet.'

And we always love parking at Tonya Kay’s Pinup Pole Show, the one at The Federal in North Hollywood which is an absolute blast. The show itself is AMAZING and anyone looking for a fun, different event, with the best artistic, aerobatic pole dancers (literally in the world) should get tickets for the next show. Tickets sell out quick!

Oh, and please check out my film 'Cynthia,' distributed by Lionsgate. You can a copy of 'Cynthia' on DVD here along with other sick gifts. Also, 'Cynthia' is now on VOD everywhere: iTunes, On Demand, Amazon, Spectrum, Direct TV, Vudu, GooglePLay, Verizon, Optimum, Flix Fling, etc.!
Back to Post
About Tonya Kay 111 Articles
Tonya Kay is a brutally elegant film actress, burlesque headliner, raw vegan renegade and producer of Tonya Kay’s Pinup Pole Show and classic car cruise-in. You’ve seen her on Broadway (STOMP, De La Guarda) and in blockbuster films (Lone Ranger, Muppets Movie). Her pinup and modeling work has been published in magazines, calendars and comic books like Car Kulture Deluxe, DrivenWorld, Grease Inc, Superfly Auto, The SpeedGirls and Garage Latino. And her viscous classic hot rod, the Grape Space Coaster, is even more famous than she is standing out on Discovery’s "Sticker Shock," Speed TV’s "My Ride Rules" and music videos.