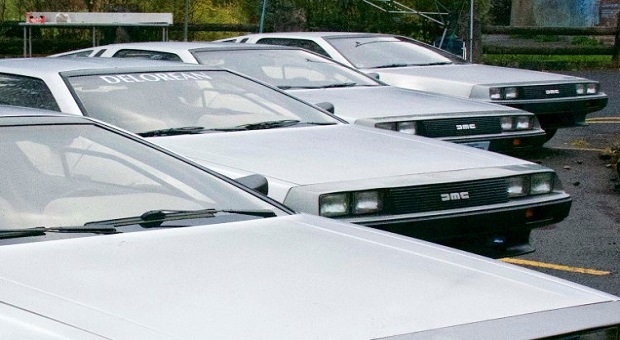 The Petersen Automotive Museum in Los Angeles, CA will be hosting an ’80s throwback month to honor and become the official home of the Back to the Future Delorean. Events will include an exclusive panel discussion and unveiling of the DeLorean, an ’80s themed dance party, Breakfast Club Cruise-In for DeLorean owners to bring their cars and show them off, as well as an exclusive screening of Back to the Future Part I.

The event will kick off on April 20th with the panel discussion and unveiling of the DeLorean at 7 p.m. The panel discussion will feature Back to the Future writer and co-creator Bob Gale and Universal Studios Hollywood Creative Director John Murdy, alongside the movie car builders and technicians who worked to restore the DeLorean back to its on-screen condition.

The next event is the Enchantment Under The Sea Dance & Party on April 23rd where guests are invited to wear their best ’80s outfits and go back in time. The dance party will recreate the Enchantment Under the Sea dance from Back to the Future and guests will rock out to the ’80s sensation Missing Persons, and Back to the Future tribute band The Flux Capacitors. Guests must be 21 years of age or older to attend this event.

The last event will be an exclusive screening of Back to the Future Part I. The DeLorean DMC-12 time machine will be on display courtesy of Universal Studios Hollywood. This will mark the first time the on-screen hero car will be at the Petersen. The screening will take place June 8th in the Petersen’s Meyer Gallery.

Members of the Petersen Museum will receive free admission to the unveiling, cruise-in, and movie night as well as $10 off the admission of the Enchantment Under The Sea Dance. If you are not a museum member, all-inclusive tickets, which include admission to all four events as well as one drink ticket at the dance, are $40.