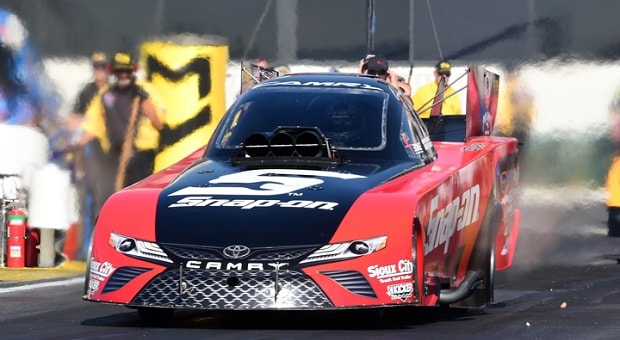 The past few years, highlight reels for Cruz Pedregon have been for his flying lessons (see Las Vegas 2’s 2016 long wheelstand) rather than his NHRA Mello Yello Funny Car successes. There have been times when Pedregon hasn’t qualified for races, gone out in the first round, generally had the types of problems that often befall single-car teams in NHRA drag racing. Still, the 1992 and 2008 Funny Car champion has continued to defy the odds by securing and keeping SnapOn® sponsorship for his red flopper as he always tries to up his game.

Finally. Finally, victory for Cruz Pedregon came at the NGK Spark Plugs Four-Wide NHRA Nationals, held this past weekend on the zMAX Dragway dragstrip adjacent to Charlotte Motor Speedway in North Carolina. The second four-wide race of the year – on the first circuit to host a four-lane NHRA national event – was an event that pitted winners and runners-up against one another once the first round of eliminations was complete.

The past few years haven’t been the best for The Cruzer, who finished 10th in last year’s Countdown to the Championship six-race playoffs; until his victory at Charlotte, Pedregon and his Toyota Camry flopper weren’t even in the 2018 top 10 for the Funny Car category. Now he holds eighth-place points thanks to this victory, the Californian’s 36th national Funny Car win that leads him past the legendary Don “Snake” Prudhomme for fifth all-time.

“When I pulled up in the final and saw Tommy Johnson Jr., I said to myself, ‘Didn’t we already race him twice today?’ That’s a Don Schumacher Racing (DSR) car; one of these runs he’s going to get us,” Pedregon said. “Then I saw John and Courtney (Force, both in the finals with their JFR Camaro SS race cars) and I said to myself, ‘Man, we’ve got our work cut out for us.’ I just didn’t want to finish fourth, so I was going to do everything I could to not finish fourth – and we got the win. I didn’t believe my ears when Caleb Cox, our team manager, got on the radio and said we’d won. I said, ‘I might have a little wax in my ears so I need to make sure I heard that right.’ It’s still a little bit surreal; I can’t believe that we won this race. It’s pretty cool.” 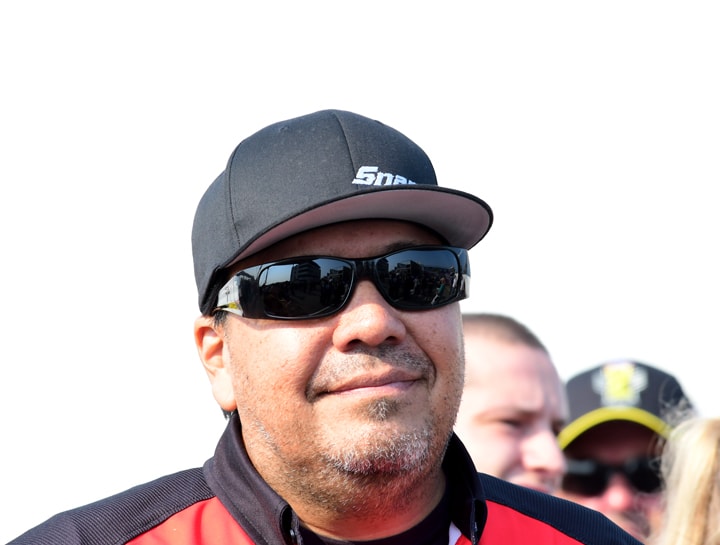 For the team owner/driver, his 36th victory ranks right up there with his first. “Believe it or not, I was thinking, ‘Man, maybe I’m not destined to win again.’ Part of the make-up in my personality is that I don’t want to do this unless I’m competitive. To be out here racing is a lot of work and a lot of stress. I have a seven-year-old daughter and the travel is tough. What motivates me is having a good running car that people respect. This is like going back to my first win. This might just be the sweetest win of my career. It shows you can be a single, independent team with no attachments to the big teams, and if you hire the right people and have the funding you can win out here.”

Well, not so fast about the lack of attachment to larger teams in the NHRA professional paddock. Cruz Pedregon took delivery of a Don Schumacher Racing chassis over the off-season and that is the car he used to win in Charlotte. “I called Don this winter and told him I needed a chassis. It was a very different chassis and we had to modify the cage, so we didn’t debut it until Houston. Let me tell you, it’s a good car. Thanks to Don – he’s a businessman and he sold us a car. It works really good. We have another one on order and I think I will be able to afford to pay for it now,” Pedregon near-laughed.

Pedregon has partnered with Snap-On Tools since 2010, when he faced the spectacle of having a good sponsor but lacking a great team. “I had a team where everyone had left me, all the crew and the crew chief. I had nothing until Snap-On came on board and sponsored me, and within a year we were winning races. I was tuning the car, but really my plate was full. By 2014 we started to win fewer races and by 2015 we just hit the wall,” he said. “There was some technology going on in Funny Car that we weren’t privy to and we fell behind as a team. So we had to regroup as a team. I went and hired Aaron (Brooks, who previously ran Morgan Lucas’ Top Fuel team), who was hungry and very dedicated. Thankfully, this year we were joined by Glen Huszar, who has a lot of years with DSR and Kalitta, as assistant crew chief on the car.

“So it’s been a one-two punch. Last year was frustrating, because Aaron had his ideas and I had mine, but Aaron weathered the storm of my ranting and craziness and today we had a car that just won a race. It just goes to show if you stick with good people that they’ll make you look good,” Pedregon stated.

There have been five different Funny Car winners in this year’s initial six races, with No. 7 happening this coming weekend at Atlanta, home of the Southern NHRA Nationals. Three of those wins have come for Toyota-clad Funny Cars, with J.R. Todd picking up consecutive wins and Pedregon taking the third Wally trophy for the Japanese brand. This shows, as Cruz Pedregon pointed out, “The DSR and John Force cars don’t have all the answers. We can stick our nose in there and mix things up with them.” Pedregon is hoping momentum is now on his side through to the close of the 24-race 2018 season.