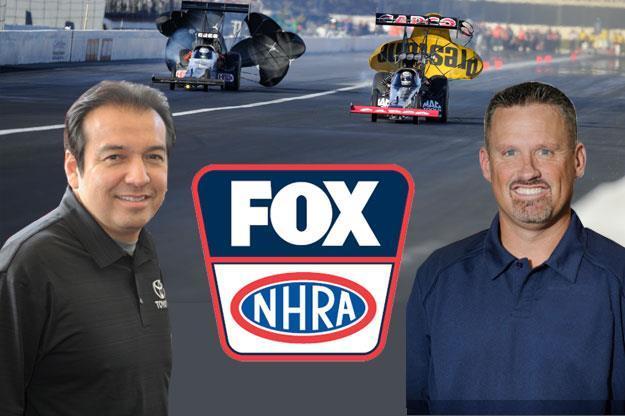 It’s never easy switching jobs.  That’s especially true for Tony Pedregon, a professional Funny Car racer, who is now turning in his steering wheel for a microphone as the new color/analyst for the FOX Sports NHRA broadcast team.

It’s something he openly welcomes and the new adventure already has widened his eyes and what has surprised him the most is the all the attention he’s received about the move from the media that’s he’s now joining.

Recently he addressed the Charlotte Motor Speedway Media tour about his change saying, “I got out of the seat at the wrong time.  I got out and retired the identical time Jeff Gordon did, so possibly you didn’t hear a lot about me,” leaving the media in laughter showing why he’s the right guy and feeling comfortable in front of the camera.

“Oh, very excited,” said Pedregon. “You know, one of the things that I’ve found interesting, I’ve been doing this as a profession for so many years, it would have been 20 years this year, that, you know, as we prepare for racing season.  I think especially in the month of January, you’re really in full swing, and you start to feel some of the pressures and really the excitement in a different capacity.  I’ve been just nonstop trying to pay attention to previous shows, to the dos and don’ts, how to improve moving forward, what we’re going to be doing on the new FOX Sports show.  But in a different way, I’m excited. 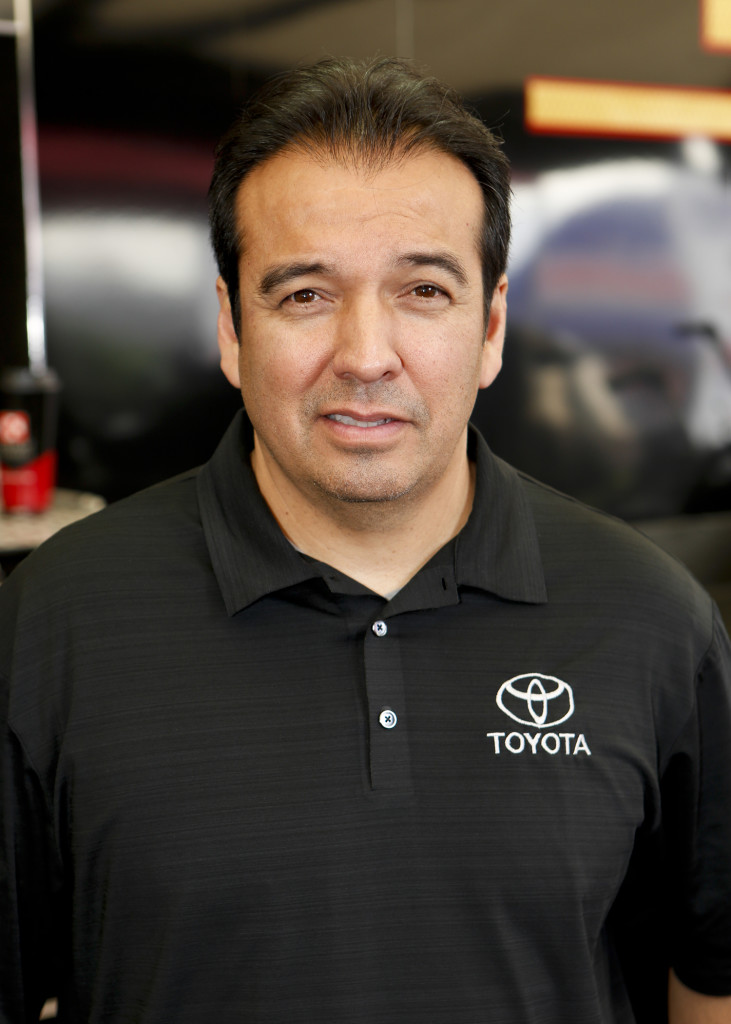 “I can tell you that it is hard work.  It’s completely different than I thought.  I just thought it would be a natural transition because I’ve had numerous interviews, but I did learn in a short amount of time that being on the other side of the camera is completely different.  You just have to take a different approach.  I’ve done so many functions, I almost felt like one of the drivers.  But I kind of keep having to remind myself I’m not but that’s okay, because really my position with the new show is and I think it creates a good balance, bringing in Dave Rieff and John Kernan,  Jamie Howe, everyone has experience specifically in our sport with the exception of me.  So my approach is I’m going to heavily rely on them, Ken Adelson and Peter the producer and the executive producer; they’ve provided good direction, but I just need to better understand my role and ask them to point out if I can bring our audience into the car and onto the track.

Pedregon’s racing career consisted of winning two NHRA Funny Car championships in 2003 and 2007 out of 480 races recording 43 wins out of 76 final rounds producing a 517-416 win/loss ratio and 37 No. 1 Low ET qualifiers.  These impressive credentials brought him to light to the FOX executives.  He and his brother, Cruz ventured out on their own in 2004 and that gave him more insight into the sport and now can relate to fans of what teams go through. 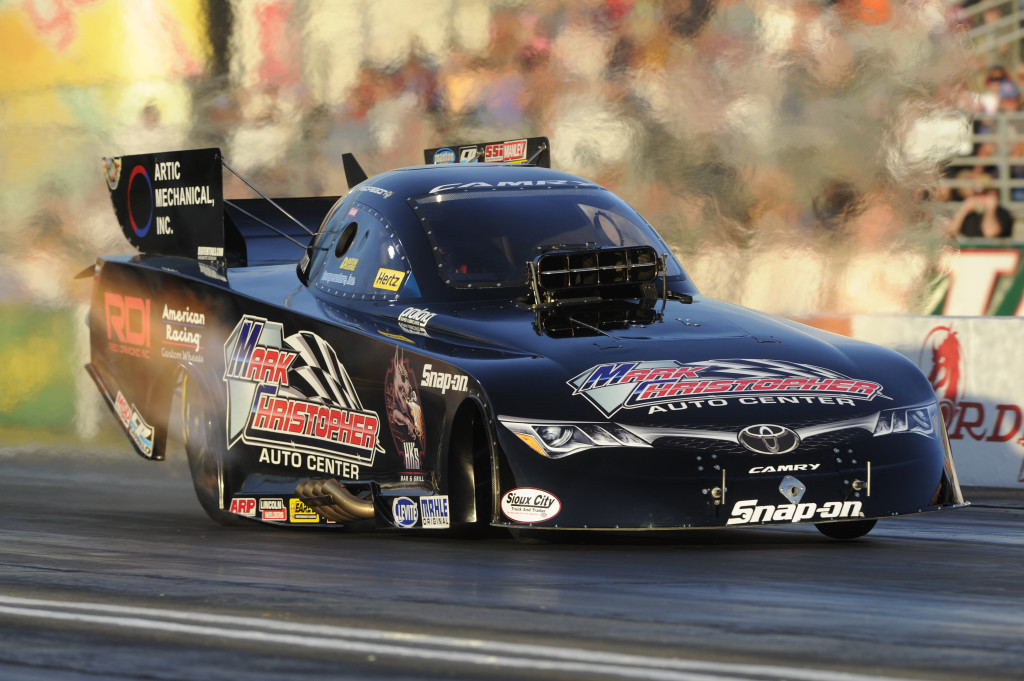 “Being a former team owner, the biggest challenge with any business is marketing and putting the product in the consumer’s hand one time, and if you think about our sport, it’s the same.  It’s a great product, which is where it starts. Our challenge is marketing, and I’ve always felt, even in my previous role as a team owner and as a driver, it was important to if we could put it in their hand, if we could give them the experience one time, so that continues to be the challenge of the sport.”

”Live TV is going to improve that.  It’s going to do wonders for the sport, the consistency and the programming and the scheduling, but I think that the new approach and something that I feel is important that the initiatives for FOX is we have a great fan base.  We have the viewers, some of them like Top Fuel cars, some of them like Funny Cars, Pro Stock, so we have a lot of diversity.  The goal across the board is to appeal to a new audience, so in that regard, we want to be we’re selling entertainment.  We’re selling cars that are quick and fast and there are so many different personalities, male and female.  There’s Hispanic, there’s African American, so there’s all this diversity that really no other level of motorsports has to offer, and it’s our job, it’s FOX Sports’ responsibility to bring that to life.  I’m a small part of that, and in my position if I can somehow appeal to the person that’s flipping through, they’re going to see something that they’ve never seen before.”

“I know that FOX Sports has their A team behind us, not their B team or C team.  I’ve met them.  I’ve seen them.  They were in California.  A couple days later, I saw them in Charlotte. Therefore, I know that they are behind building this sport.  They want to produce not a good show, a great show. I’ve seen what NHRA has done and what they’ve achieved by putting the production in house.  They can see it.   It’s all the time hands on, and you know, I’ve run a business, and that’s the only way to do it.

“I can see all these good things happening, and if everybody does their job, it may take a little while.  I don’t want it to take too long, but I think the current fans we have are going to like it.  They may be critical.  Nobody likes a transition or change, but the goal should be where is this sport going to be in one year or in three years from now, and so my goal is to see some of those drivers evolve like I did and have the same opportunity, and if that rating can improve, you’ll see the sponsors come.  So I think it’s time to expect more, and I’m putting the work in, and I can see all of my teammates that I’m going to be working with, they’re nonstop around the clock.  So, this group is doing these good things.

Meanwhile, anticipating the season with the FOX NHRA team now spends time watching other great broadcasters and trying to learn from the best. It’s the camaraderie he noticed between the individuals and that’s the ebb and flow of the broadcast keeping it pristine and fresh.

“Building chemistry with my team is so important,” said Pedregon.  “I’ve worked with Dave Rieff, Jamie Howe and John Kernan.  I know them all.  I think they do a very good job, but I think the challenge for all of us, including the production team, is to have time together, to build a chemistry.  I knew how vital that was for a racing team, and that’s something that’s really underestimated that people don’t realize is that from what we call a bottom end to the guy that’s responsible for torqueing the rods all the way to your crew chief.  There’s a lot of good ones on board at FOX, there’s some good talent with this team, and I think the chemistry, working together, being smooth, and being able to work off one another.  I’ve been watching a lot of NFL, and I’ve seen how well John Gruden and Mike Tirico and Phil Simms and Jim Nance work together, these guys just build that chemistry and you can only get that in time, and our goal is to be able to achieve that in short amount of time.”