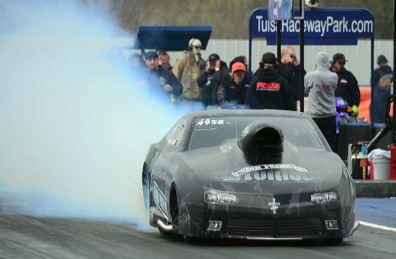 The season-opening PDRA Nationals was right on schedule with plenty of pre-race chatter and good-natured trash talk between competitors. However, the good spirits didn’t last long. After consulting with TRP owners Keith Haney and Todd Martin, heavy rains the week before the event resulted in PDRA officials postponing the race one week to March 17-19 instead of March 10-12. The decision was made due to the saturated ground in the off-pavement pit areas, which could have potentially posed a hazard to the heavy race rigs owned by many PDRA teams.

Tulsa Raceway Park dried out as was planned, but on race weekend, strong winds and cold temperatures took over the park welcoming spectators and 120 PDRA race teams. In addition, moving the date put the season-opener on top of an NHRA national event in Florida that cost them several of their competitors. The new date also fell in Spring Break for many families, resulting in a loss of spectators, and it was competing with a downtown St. Patrick’s Day celebration that drew much of the usual local Tulsa audience.

“It’s really too bad we had to change the original schedule,” said park co-owner Haney, who also competes in the PDRA Pro Nitrous class. “I was really looking forward to a great event, both as a track operator and a racer, but the weather was a little too unpredictable this time around and it really hurt our attendance through both the racer’s and spectator’s gates. Fortunately, I know the PDRA very well so I know it’s not the product that’s at fault; with better conditions I’m more than confident we can pack this place again, just like we did in 2014, the last time the PDRA was here.”

The track’s Facebook page experienced intense growth, showing fan interest to the event. Outlets such as DRAG ILLUSTRATED, DragRaceCentral.com, CompetitionPlus.com, DragRacingOnline.com, and Bangshift.com attended the event and gave lots of media coverage. In addition, the PDRA Nationals also provided live video streaming of all qualifying and elimination rounds by Motor Mania TV, which recorded 346,812 views over the course of more than 30 hours of streaming. 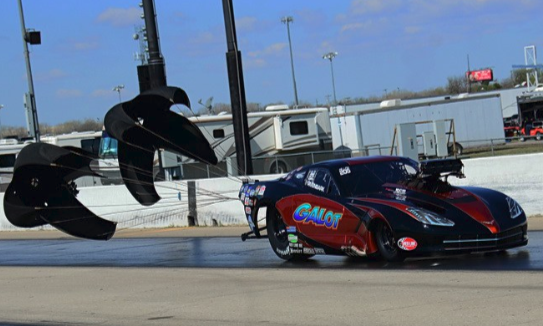 PDRA racers worked to overcome the obstacles of 20- to 30-mph winds and temperatures in the low-to-mid-40s. They did not let the conditions slow them down, as there were record-setting runs in all three for the PDRA’s premier classes.

After 19 cars made qualifying attempts for the 16-car race day field, a quartet of ’69 Camaros sat at the top of the Pro Extreme list. Number-one starter Brandon Snider set a new, official ET record of 3.48 seconds after running 219.47 mph on the eighth mile track. Close behind was defending class champion Jason Scruggs with an ET of 3.49 and a class-leading 223.54 mph.

In the nitrous class, Tommy Franklin and Steve Jackson qualified their ’69 Camaros first and second, respectively, after making the quickest side-by-side passes in PDRA Pro Nitrous history. Franklin scored an ET of 3.68 seconds at 203.34 mph and Jackson trailed just one-hundredth behind at 3.69 seconds and 203.83 mph. Haney came in seventh with a 3.77 ET at 200.05 mph.

Kevin Rivenbark and his 2015 Corvette took the Pro Boost top qualifier award after a record-setting 3.75 second ET at 199.58 mph. Placing second was Melanie Salemi, the only woman currently racing in the PDRA pro ranks, placing second with a 3.78 ET at 195.17 in her ’68 Firebird. 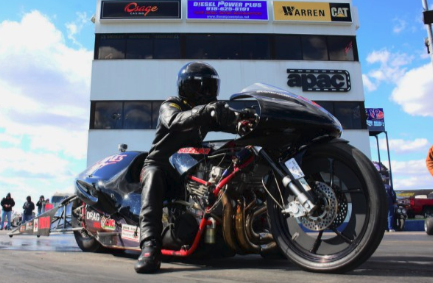 Nineteen drivers made qualifying attempts for Pro Jr. Dragster, which seeds its entries based on how close each driver can run to the 7.90 index, and racer Cole Isbell ran a dead-on 7.90 at 82.93 mph to lead the way.

Unfortunately, the weather did not change overnight and the wind and cold temperatures continued into Saturday, impacting the spectator attendance. Eliminations began, but eventually, dropping temperatures made the track too cold to safely continue with the elimination rounds.

“It’s a call we never want to make, especially after all these great Oklahoma fans came out and supported us all weekend, but with the racing surface at 45 degrees and still dropping, it was just getting too cold for these 200-mile-an-hour cars to safely go down the track,” said Bob Harris, PDRA Race Director. “The safety of our competitors is the number-one concern for the PDRA, so with only the semi-finals and final rounds left to run for most classes we made the tough decision to wrap them up next month at Rockingham Dragway in North Carolina.”

The Pro Extreme Motorcycle and Top Jr. Dragster classes were raced to completion at Tulsa, where number-one qualifier Garner-Jones prevailed in the bike final and Brooklyn Staab won the Jr. Dragster final. 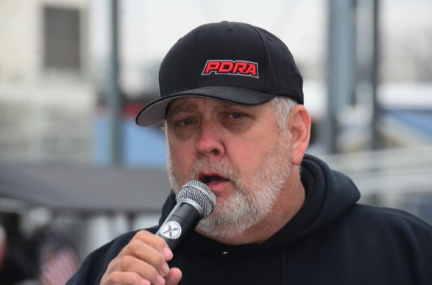 After the announcement was made that the PDRA’s Pro Extreme, Pro Nitrous and Pro Boost cars would be completing their semis and finals on April 8 at Rockingham, racers from the series’ sportsman teams asked that their remaining rounds also be postponed. The Pro Jr. Dragster semis and final round also will be run during the qualifying at Rockingham, while the PDRA Top Dragster and Top Sportsman final rounds will be completed May 20th at the PDRA Texas Nationals near Dallas.

“It’s definitely not ideal and not the way we wanted to end our return to this great facility in Tulsa after missing it on the schedule last year, but it’s important to our racers and to the series that the points and purses are earned on the track, whether that happens in Tulsa, Rockingham or Dallas,” Harris said. “We appreciate the assistance and understanding of PDRA race teams and fans for their help in making this happen as painlessly as possible.”