After racing against the elements the last few weeks, the champions of the World of Outlaws Morton Buildings Late Models were back to their winning ways in two different states. Beginning with the debut of a new track on Friday night, which brought with it warm weather and no threat of rain as well as an award-winning crowd, one driver would earn his second victory of the season at his home track.

Despite having to start on the outside pole beside the Rocket, “Shepp” Brandon Sheppard, for the first of two 50 Lap feature events of the weekend, Brandon Overton found a way to hold off the driver who owned the first half of the night’s events at Cochran Motor Speedway.

While Sheppard took the pole and raced this until Lap 14, the No. 18 of Chase Junghans, who had been closing the gap between Sheppard and Overton, found himself drag racing with Sheppard down the backstretch and taking the lead. After Junghans pulled to the lead, Overton found his shot to challenge for the lead. After the No. 101 of Casey Roberts came out of turn two on the low side, Junghans tried to thread the needle in turn three between Overton and Roberts. After an unsuccessful pass Overton got the best of his competitors to regain the lead.

This was just the move Overton needed to take the race win; he led the final 21 laps to pick up the fifth Morton Buildings Feature win of his career.

“We are definitely going in the right direction with our car,” said Overton. “The truth is we have been struggling a bit lately, but after making a bunch of changes the last couple of weeks it shows that we are on our way back to the top.” 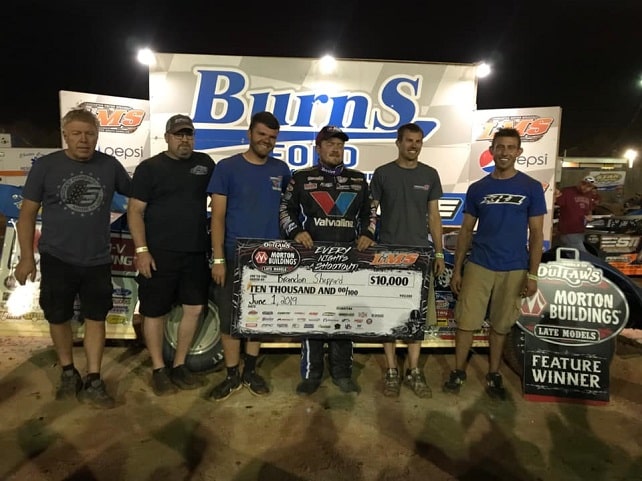 While he missed out on yet another win on Friday night, Brandon Sheppard and his Rocket1 Racing team were given a second chance on Saturday night at Lancaster Motor Speedway. No other track the World of Outlaws Morton Buildings Late Model Series has visited so far this year has been able to display the true rocket-like speed of the Rocket, “Shepp” Brandon Sheppard, quite like Lancaster Motor Speedway did in its Series debut on Saturday night.

Much like Friday night’s feature race, the No. 20 of Brandon Overton led the way early in the second 50 Lap feature of the weekend. Although Overton hoped to take this lead to a second feature race win of the weekend, he came up short after Lancaster, SC’s own Ben Watkins jumped to the early lead and pounded the cushion of the ½ mile high banked dirt track for the first 20 Laps.

On Lap 21, everything changed after Watkins shredded a right-rear tire and brought out the caution. Just three laps earlier, the same heartbreak struck then-runner-up Brandon Overton as he also blew a right-rear chasing down Watkins.

With the race’s original leader now out of the picture, Brandon Sheppard and his Rocket1 Racing ride had their chance to race to the lead. Although a few cautions continued to span the remainder of this race, Sheppard was able to keep it in clean air for most of the way and take this to his eighth win of the season and 45th overall, granting him sole ownership of third place on the all-time World of Outlaws Feature wins list.

“It was a lot of fun out there,” said Sheppard. “This track is a lot different than anything else that we have ever raced on, and it was definitely cool to win at this place and to say that I am the first World of Outlaws Morton Buildings Late Model Series driver to win here is pretty incredible.”

The Outlaws get the next few weeks off, but points leader Brandon Sheppard will have a chance to continue his dominance at the Firecracker 10.0 on June 20-22 at Lernerville Speedway. Stay tuned to RacingJunk.com for all the latest racing news in the dirt.