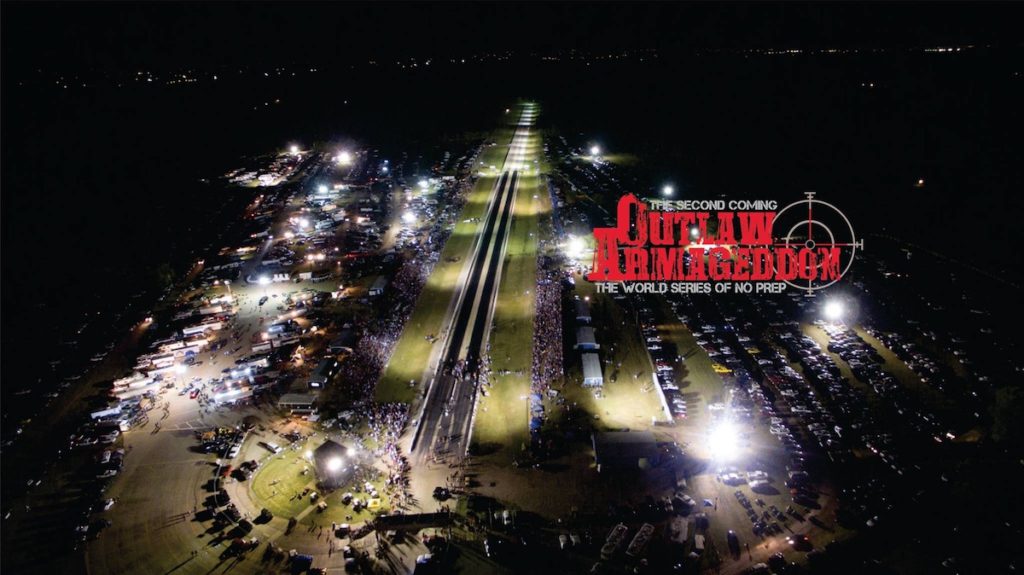 Many race fans were buzzing this weekend about what they were hoping would be the return of old school NASCAR Cup racing at Bristol Motor Speedway. While many of these hopes were dashed in ongoing downpours, drag racing fans had all of the thrills this weekend at the second annual Outlaw Armageddon No Prep Invitational at Thunder Valley Raceway Park.

Starring many well-known names from Discovery Channel’s reality show Street Outlaws like Shawn Ellington in “Murder Nova”, “Daddy Dave” Comstock, Kye Kelley, Chuck Seitsinger in “Death Trap”, Jeff Lutz, Larry Larson and “Birdman” James Finney, this event featured over 200 cars all ready to battle for huge payouts and bragging rights including $30,000 to win big tire and $20,000 to win small tire with a total payout of over $80,000 in cash.

This no preparation street racing type of event even had its own racing surface story to tell as absolutely zero traction compound was applied to the racing surface. All of the developed rubber on the strip was scraped off prior to the start of the race, and the competitors were only allowed to do burnouts using their preferred mixture of “pimp juice” – a blend of traction compound and alcohol.
This event kicked off Friday night with True Street racers returning from their mandatory 35 mile cruise, then heading to the lanes for the first round pairings.

True Street rounds dwindled down to the final pair, Stefan Slisz and Blake Hughes, but rain postponed all remaining racing to Saturday.
As things got started back up on Saturday, the semi-finals resulted in Mike Henson’s Oklahoma based turbocharged 2002 Corvette, Plan B, being paired up with Gaylen Smith’s screw-blown “Texas Bounty Hunter” Pro Mod. In a close one, Smith’s 1957 Chevy took the win by a car and a half to secure his spot in the final round.

The second semi-final pair saw Steve Wiley facing off against Jerry Bird’s nitrous assisted Ford Probe with Bird going to the finals. A pair of Texas-based, screw-blown Outlaw Pro Mods were set for the finale of the Big Tire Invitational.

At the end of the day Wiley would take home the ultimate $30,000 Big Tire Invitational win.
Stay tuned to RacingJunk.com for details from more exciting events like this one.