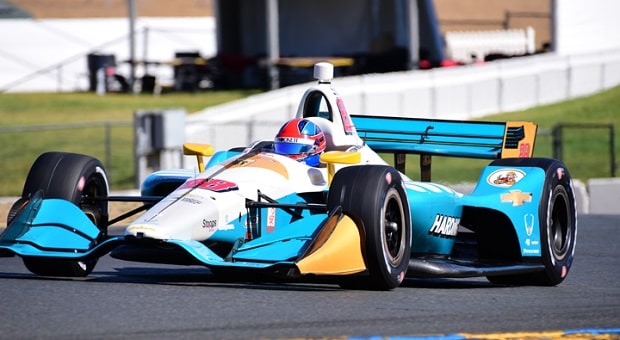 Within the past week, the newly renamed NTT IndyCar Series held a couple of tests in preparation for the Firestone Grand Prix of St. Petersburg season opener, scheduled for March 8-10. The first took place where the season ends in September, at WeatherTech Raceway Laguna Seca; the most recent test occurred at Circuit of the Americas (COTA) outside Austin, Texas, which INDYCAR visits for its first time in April.

Rain disrupted last Friday’s California test and can’t be seen as a barometer for the 2019 season. The test at COTA, together with news that surrounded it, says a lot about the future of Indy car racing. As with any spaghetti Western, there’s some good, some bad, some ugly.

The ugliest piece of news emitting from COTA before testing began was notification that Patricio O’Ward, who made an auspicious debut last September with Harding Steinbrenner Racing (HSR) in Sonoma would not be driving for the team this season. Shortly after this news broke, Michel Andretti said he offered the 2018 Indy Lights champion an eight-race deal but was turned down. O’Ward said he’d prefer to get a full-season package – but at this point there doesn’t appear to be a seat for him, even with $1.1 million at his disposal for winning the Indy Lights title. It wasn’t enough for HSR to field a full-season entry for O’Ward.

That leaves Harding Steinbrenner with a single driver, Colton Herta, who was runner-up to O’Ward in Lights last year and who made a quiet debut at Sonoma. “#Hertamania2,” as he’s being called, did manage to show that Sonoma race might have been a fluke for him: of the four test sessions held at COTA this week, Colton Herta led two of them and had the best overall lap time around the 3.41-mile, 20-corner Grand Prix track, 1 minute 46.6258 seconds.

There were only two drivers in the 1:46 club: Herta and Andretti Autosport standout Alexander Rossi. Herta’s team signed a technical alliance with Andretti’s squad that was announced on Monday. That agreement will allow Herta’s quicker progression through an obvious learning curve; as a rookie in the series, he’s up against Chip Ganassi Racing’s Felix Rosenqvist, Dale Coyne Racing’s Santino Ferrucci, Marcus Ericsson of Arrow Schmidt Peterson Motorsports, RC Enerson, testing with Carlin and Kyle Kaiser of Juncos Racing.

Honda teams led the standings here, as Chevrolet’s best at this test was the expanded Team Penske grouping of Will Power, Simon Pagenaud, Josef Newgarden and the returning Helio Castroneves, who was the butt of his teammates’ jokes throughout the meeting. They tested third, fifth, 11th and 12, respectively. As Honda teams did during the aero kit wars, Chevy teams mostly hung toward the rear of the 25-car field, albeit some experiencing mechanical difficulties or trying new parts in testing that they wouldn’t have the opportunity to try on a race weekend.

Earlier this week, it was announced that McLaren’s return to the Indianapolis 500 with two-time Formula One champion Fernando Alonso, the recent winner of the Rolex 24 at Daytona, will be in conjunction with Carlin Motorsport, which is fielding a single full-season Chevy-powered entry for Max Chilton. This will another technical alliance, similar to the one put together by Zak Brown in 2017 for Alonso’s first trip to the Brickyard, and was revealed by the Indianapolis Star.

Alonso picked a poor year to be with Honda; while they won the 500 in 2017, it was one of the few bright spots for the engine-building concern and pretty much mirrored the difficulties Honda was having in F1 (even though they’re separate companies). This time around, they’re affiliated with the reigning Indy 500 champs, Chevy, and they’ve got Gil de Ferran, McLaren’s sporting director, on hand to focus his energy on the project. De Ferran, the 2003 Indy 500 champ and a two-time CART titleholder will again serve as Alonso’s driving coach, as he did for the 101st edition of the race.

Alonso will also have Andy Brown as chief race engineer. Well-known for his engineering and aerodynamics capabilities, Brown has been part of four Indy 500 wins: 1992 with Al Unser Jr., Dan Wheldon’s 2005 victory, in 2008 with Scott Dixon and Dario Franchitti’s 2010 win. Three of those four were with Chip Ganassi Racing. McLaren also enlisted Anton Julian, brother of Scott Dixon’s crew chief Blair Julian for this team; he most recently served as crew chief/chief mechanic for Josef Newgarden at Carpenter Fisher Hartman Racing.

There will likely be private testing between now and the St Pete season starter. With 17 NTT IndyCar Series races running from March to mid-September, INDYCAR has the added value of being shown on NBC properties throughout the season. Last week the series announced INDYCARPass on NBC Sports Gold, with more than 200 hours of coverage, including practices and qualifying sessions streaming live, as well as Indy Lights coverage. The cost prior to the start of the season is $49.99. After St Pete, the price increases to $54.99.