The 2016 NHRDA Championship Series kicked off at Texas Motorplex over the weekend. The NHRDA Texas Diesel Nationals has always been one of the biggest events on the schedule, and this year was no different, hosting record-setting spectator crowds despite the unpredictable weather forecast.

Action for the day included NHRDA Diesel Drag Racing, Sled Pulling Series, plus a burnout contest, a great show-n-shine, and a dyno competition.

Over 1200 feet of vendor row was featured in Diesel Alley, including over 30 vendors displaying the latest and greatest in Diesel Performance. The NHRDA will return to Texas Motorplex on September 30 and October 1 for the NHRDA World Finals. 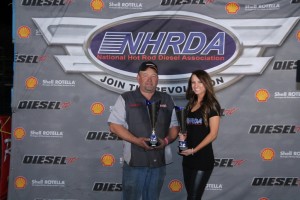 Greenway defeated World Champion Jason Stott with a 217.12 foot pull in the Super Stock Diesel Category. Jim had sparks flying as he pulled down the track in his FASS – Baillie Diesel sponsored Dodge. The Greenway team is planning on driving out to Arizona in two weeks to continue their bid for the 2016 Super Stock championship

The 2015 National Champion was busy with this hook, his Baillie Diesel Dodge danced around from left to right on the pull, but his 335.04 feet effort was more than enough to win by over 30 feet. 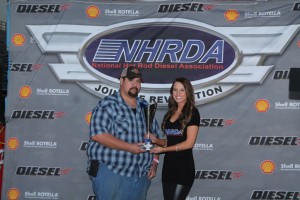 Hyndman, a local favorite, came out on top even though several trucks made pulls past the 300 foot mark. Buck made a full pull of 328.05 feet to win the Limited Pro Stock Diesel Category. 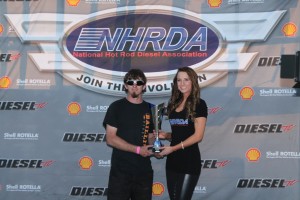 The drive back to West Plains, Missouri will be a good one for Aaron Powell, who got a lot of help from Jim Greenway and the guys at Baillie Motorsports to get ready for the event and with his 364.01 pull won his first even of the 2016 season. 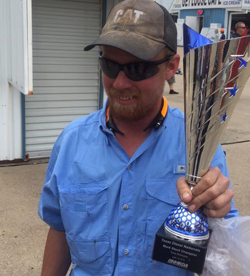 Jarvis brought out his daily working flatbed truck from Fredricksburg, TX. He had a smooth and straight pull and went 307.6 feet on the last hook and pull of the evening. 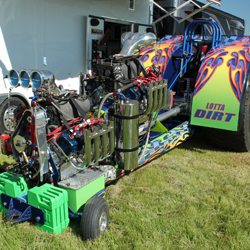 Justin named his multi engine tractor LOTTA DIRT for a reason and as he thundered down the track, the spectators were cheering him on to victory. 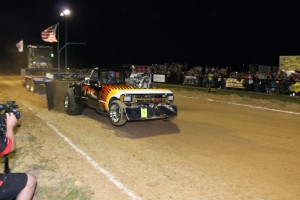 Gallion brought all his toys this weekend, which included his Blown 2 wheel drive truck named TAZ. He made a wheels-up-in-the-air crowd pleasing 281.01 pull to win his class. 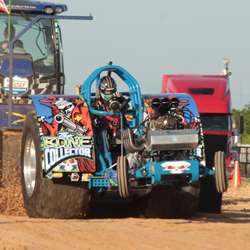 The Bone Collector piloted by Riola is always a crowd favorite at Texas Motorplex. Pete had the spectators up and cheering as he thundered down the track to a distance of 293.04 to take the win. 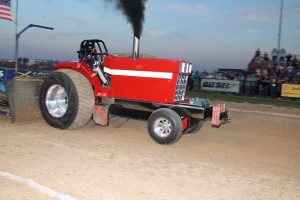 Andy calls his tractor the Red Mule, and for good reason as he put the Mule to the test in the 9000lb tractor class. The 307.09 pull was godo enough to take home the win and money. 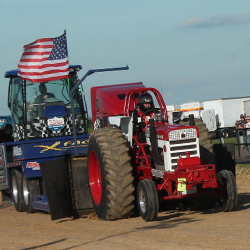 Beazley has been pulling his tractors for years down in Texas, so it was no surprise when the Chigger Digger made a pull of 317.09 to win his class. 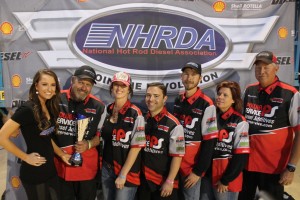 In Top Diesel John Robinson made his competition debut in a new dragster, then marched to yet another win in the Category. He won Top Diesel in 2013 and 2014 in a Funny Car, this time the Power Service Diesel Additives dragster made a silky smooth blast down the right lane, besting a hard charging Wade Moody’s new dragster. Robinson recorded a 6.883 at 208.65 mph in the final round. 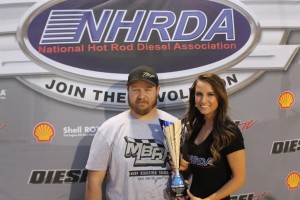 In the Pro Stock class, Jarid Vollmer made the long trip from Idaho and took the G7J Diesel 1941 Willys Batmobile to the winners circle. The ’41 Willys left the starting line like a freight train all weekend. Jarid defeated Dallas Theobald, just missing the seven second zone with an 8.011 at 168.26 mph in the final round. Jarid will not be running his famous Pro Street Truck this season as main sponsor Bully Dog has canceled the program, he will be concentrating on the Pro Stock Championship in 2016. 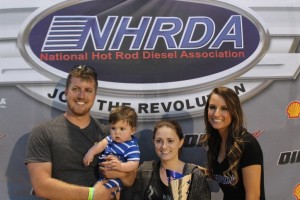 In a final round battle of two Pitch Black Pro Street Trucks, Ryan’s beautiful Black Dodge Ram ran a blistering 8.735 at 156.77 mph to defeat Matt Kubik’s Ford in the final round of Pro Street. Milliken is still looking to reset the record in the Pro Street Category at the Tulsa Diesel Nationals in May. 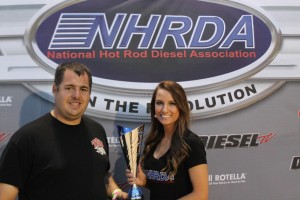 Texas Native Chris Buhidar has started the 2016 Championship year off right where he left off last season, where he was the National Champion in Super Street. Chris qualified #1, and then ran a 9.69 ET at 146.14 mph in the final round to best runner-up George Loewen’s 10.22 ET at 139.61 mph. 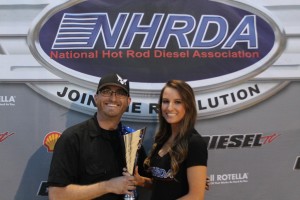 Wade Boyd qualified number one in the class, marched through the rounds, then had a much better reaction time at the starting line and used the advantage to take the win in the very competitive 10.90 index class. He ran 11.80 to defeat Cody Smith in the final round. 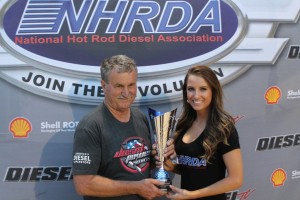 Larry Brown has been racing with NHRDA for a long time with his flatbed Dodge Ram, and this weekend he won all the marbles here in Texas by defeating #1 Qualifier Amalee Mueller in the final round, Brown’s 12.255 ET bested Mueller’s 12.26. 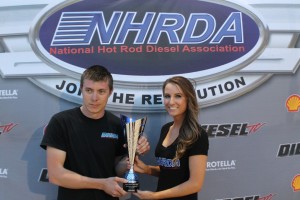 Jake has been a spectator for the last four years at the Texas Diesel nationals and finally convinced himself to try racing. The choice paid off handsomely as he won it all in the competitive Sportsman category. Jake defeated runner-up Ross Dunagan in the final round when Dunagan went too quick and broke out. 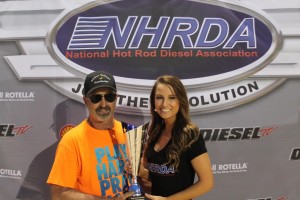 Jim made his trip out from Colorado worthwhile; he won in his Kenworth in the final round by defeating Waylon Aldrich’s Peterbuilt in the final 15.95 to Aldrich’s 17.08. 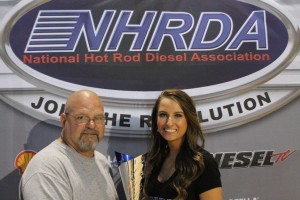 Clifton was grabbing gears all day long as the big rig thundered down the quarter mile round after round and he defeated Waylon Aldrich in the final round to take the win. 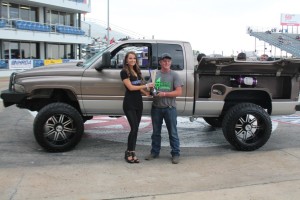 Chase’s beautiful 2001 Dodge Ram hails from Nacogdoches TX – it was once his mom’s truck, and he has been working on it for seven years to get it finished. The unique truck even sports a secret compartment for a bottle of NOS if needed. 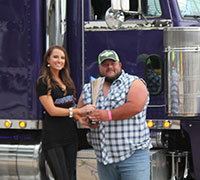 Jason’s Purple 2001 Peterbuilt took the top prize with his every day working truck after he and his brother, wife, and family spent all night cleaning the road-grime off in preparation for the Semi Truck Show ‘n Shine. 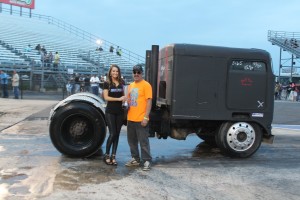 Jim Disher’s unique chopped, single axle semi has long been a fan favorite at the burnout contest, and had already won the Hot Rod Semi Truck class earlier in the afternoon. For the burnout contest, Jim had a secret weapon, when the smoke finally cleared and you could see his semi again, Jim got out of the cab wearing a gas mask to win the burnout contest. Disher commented why he entered the burnout: “I needed the money to get back home, it’s snowing!”