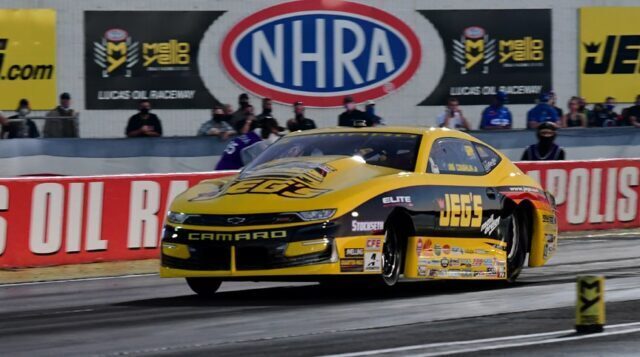 Conditions during last weekend’s NHRA Camping World Drag Racing Series Mopar Express Lane NHRA Midwest Nationals presented the sanctioning body with extreme challenges. Since its Return to Racing in July at Indianapolis, only the Denso Spark Plugs U.S. Nationals has had more than two qualifying sessions (there were three at the U.S. Nationals), which has made it essential to have a good-running car or motorcycle right out of the box.

That wasn’t possible during this particular race weekend, held at World Wide Technology Raceway (WWTR) outside St. Louis the first weekend of October. Rain and chill limited Top Fuel and Funny Car to a single qualifying session each. Very few of the nitro runners were able to post clean laps in their 1,000-foot time trials; only Paul Lee eclipsed 325 mph in Funny Car with his Dodge Charger, clocking in at 3.913/326.95. In Top Fuel qualifying, six racers got the numbers right and turned better than 325 mph, eight-time champion Tony Schumacher leading the pack with his lap of 3.680/332.92.

Neither Pro Stock nor Pro Stock Motorcycle were able to post qualifying laps on Saturday as weather and stoppages impeded both Camping World classes. On Sunday, neither class was able to run after the quarterfinals. They were dealing with track temps in the mid-70s and air temps not even hitting 60 degrees.

It wasn’t just Leah Pruett and Alexis DeJoria that had issues getting down the track. There were huge problems in Pro Stock and it appears, several days later and after much discussion, that NHRA is just hoping and intending to let their issues die down. And hopes they’ll go away.

At this moment, NHRA is comparing the difficulties to two events in Charlotte: 2012 when Shane Gray crashed at the top of the track and 2014 when V Gaines had similar difficulties. Gray took blame for his rollover and NHRA stated it was a track issue when Gaines failed to finish the race rubber side down. Not the same situation at all.

After Kenny Delco crashed hard in the right lane near the finish line while racing Greg Anderson as third pair in the first round of eliminations at WWTR, the balance of the field that was waiting in the staging lanes made adjustments to their wicker bills.

On Jeg Coughlin Jr.’s car, waiting to [once again] race nephew Troy Coughlin Jr, the Elite Motorsports team added three degrees of wing and moved five pounds of ballast from the drive shaft area of the car to the rear under-deck lid. The pair before the Coughlin match-up saw Gatornationals winner Alex Laughlin pull his chutes early after a big move, saving his car in a win over Val Smeland.

Coughlin’s run extracted an even more out-of-shape incident around the 1,000-foot mark, similar to teammate Laughlin’s, both of them running the right lane. Both lanes were suspect, but the right lane seemed to yield more issues than the left lane for the Pro Stock contingent.

“I was able to read JEGS on the side of the car,” said Scott Woodruff, who films each pass for Jeg Coughlin Jr. “Jeg Jr hit the chute button to deploy chutes, which helped him to get the car settled down. Jeg said he could feel the car spinning from 300ft while he was in the center of the groove until the erratic move his car made.”

That was just the first round for Pro Stock. In the quarterfinals, there were only two passes and neither one was clean. Laughlin, from the right lane battled Matt Hartford, but he veered toward the wall, pulling chutes early and losing the race. In the second contest, Jeg Coughlin Jr took on Greg Anderson and he made a quick move toward the centerline up-track at about 800 feet and clicked off to save the car, losing the race and, possibly, a chance of taking the title before leaving Pro Stock at year-end.

The NHRA’s Safety Safari had performed track prep by spraying the top end and dragging the surface, to half-track, which is normal for the Pro Stock classes. Those efforts did not assist the Pro Stock class at all. Pro Stock Motorcycle appeared to have fewer issues in their completed second round of racing. But for Pro Stock, not only was the track difficult to race, the surface was coming up from the water box to down-track.

The resumption of quarterfinals for Pro Stock and semifinals in Pro Stock Motorcycle are intended to take place in Dallas next weekend. During qualifying. Which means if someone in the championship hunt, who has a poor lap in qualifying might get screwed out of two possible victories. And a title.

Woodruff told NHRA’s Glen Cromwell, Josh Peterson and Ned Walliser he believed it best to restart the second round in its entirety at Dallas. “This is a bad situation that needs to be made right. We all know there aren’t a [large] number of races remaining, there was a huge uptick in on-track incidents during the race on Sunday and, after further evaluation there were surface issues that affected high horsepower, low-downforce vehicles,” like those in Pro Stock.

There was no qualifying for Pro Stock or Pro Stock Motorcycle because NHRA officials thought conditions were unsafe. There were issues in the first and second rounds for these two classes, and only three contests remain on the schedule: Dallas, Houston and Las Vegas before a champion is crowned. “Do you want to give your competitors the best opportunity to put on a show for the paying fans?” Woodruff asked. “What would be wrong with making Dallas count as double points and get two trophies? Now that would be drama and excitement for the fans.”