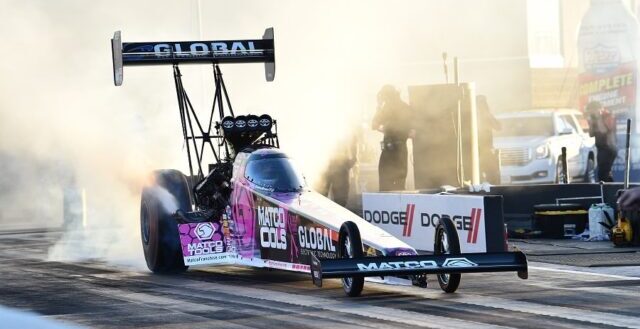 The lag between the first day of November to the middle of March has allowed competitors who declined to race during the COVID-19 pandemic’s most vicious incursion last year, to return to competition in 2021.

Many of the nitro-powered cars went to West Palm Beach – Palm Beach International Raceway – to test prior to the Gators last weekend; most of the Pro Stock contingent tuned up at the 2nd annual CTECH Doorslammer Nationals outside Orlando at the same time. Pro Stock Motorcycle entrants divided their testing between Bradenton and early arrivals at Gainesville before Friday’s first qualifying session.

The chase to usurp Steve Torrence’s hold on the Top Fuel championship will be taken up by 17 drivers who are clamoring to take down the Texan from his lofty perch. That will include 2017 champ Brittany Force, who had two solid runs at 2020’s initial two contests but did not compete from July onwards. Unfortunately, that won’t include the most successful Top Fuel racer in NHRA history, as Tony Schumacher will be sitting out the season starter and, one would think, won’t appear unless and until there’s sufficient funding to put him on the track.

Mike Salinas returns after not racing at all in 2020. The Californian elected to sit out the season starter and, once the pandemic hit, his decision for himself and his daughters looked prescient. Scott Palmer is back in the fold once again, as well.

Doug Kalitta, the only driver, other than Torrence’s father Billy, who had a chance to beat Steve, will be trying to end his non-championship curse of 20 years, with support from Mac Tools and RevChem, the latter partner that came aboard Kalitta Motorsports in 2020 and continues to support all three team entries, for Doug Kalitta and Shawn Langdon in dragsters, as well as J.R. Todd’s Toyota Camry Funny Car.

After racing since the start of NHRA (and well before that), Chris “The Greek” Karamesines has hung up his helmet and gloves in favor of his granddaughter Krista Baldwin, who cut her teeth on Top Alcohol Dragster. Baldwin will be trying to gain Rookie of the Year honors as she transitions to the 11,000-horsepower dragsters.

Funny Car has 18 entries and two of them are from John Force Racing’s stable of Chevrolet Camaro SS’s, which didn’t show for any races after Phoenix last year. All three of the JFR cars showed good speed at West Palm last weekend, as John Force aims for his 17th NHRA flopper title and 2019 champ Robert Hight tries to get back atop the Funny Car standings.

Despite the loss of Jack Beckman and Tommy Johnson Jr., missing from the Don Schumacher Racing stable this season, the field is stout,  Reigning champ Matt Hagan will be looking for his fourth title in a DSR Dodge Charger SRT Hellcat, along with teammate Ron Capps. Bob Tasca III has his Ford Mustang ready to go, as does Tim Wilkerson. Cruz Pedregon’s Charger is tuned by former DSR stalwart John Collins. Capps’ long-time crew chief, Rahn Tobler retired before the start of the season, allowing Beckman’s former crew chiefs, Dean “Guido” Antonelli and John Medlen to tune the 2016 champ.

Paul Lee returns with his own Dodge team; Blake Alexander is handling Jim Head’s Mustang again this year; Chad Green is pulling double duty in Funny Car and Pro Mod, Bobby Bode III will be wheeling his dad’ Mustang, while Alexis DeJoria’s Camry is ready to run again as she begins her second year of team ownership.

Erica Enders is looking to three-peat in Pro Stock and had a good tune-up in Orlando. Rather than having Jeg Coughlin Jr. as her teammate, she’s paired with Troy Coughlin Jr., who debuted last July in NHRA’s Return to Racing. Following the retirement of Jason Line, Greg Anderson, too, will have a new teammate in Kyle Koretsky, who dipped a toe into Pro Stock last summer and will do most, if not all of the contests on this year’s docket.

Pro Stock’s 21 entries, while primarily Chevy Camaros, does have a trio of Ford Mustangs prepped for the Cuadra family, Fernando, Fernando Jr. and Cristian, the latter two dominant in Sunday’s eliminations for the Doorslammer event. Alan Prusiensky expects Mike Callahan to license in time to contest this weekend’s race in a second Dodge Dart. Many of the Camaro racers are depending on either Elite Motorsports (Enders’ team) or KB Racing to provide horsepower, with Frank Iaconio providing Dodge power for Prusiensky and Callahan.

Pro Stock Motorcycle will look very different this year, with Harley-Davidson departing the series and NHRA [finally] allowing the Suzuki racers a 4-valve head and two fuel choices. While Matt Smith is working toward his fifth title, riding his EBR along with teammate and wife Angie Smith, Scotty Pollacheck and John Hall, among this race’s 21 entries, there won’t be a rider named Hines or Krawiec.

Rather, that Vance & Hines duo will be taking care of Angelle Sampey’s 4-valve Suzuki and those of Chad Reed and Joey Gladstone. Jerry Savoie is back again, as is Kelly Clontz, along with veteran Steve Johnson, Karen Stoffer, Jim Underdahl and 2019 Pomona finale winner Jianna Salinas, all on Suzukis. It’ll be interesting to see who’s working with 4-valve V&H engines and who sticks with the 2-valve. The EBR contingent includes Hector Arana Jr., Lance Bonham, Ryan Oehler, as well as the Matt Smith Racing foursome.

It sure looks like the weather will be glorious for the start of the NHRA season, with partly cloudy skies throughout the weekend and temps in the mid-80s. There will be three qualifying sessions, with the first one beginning at 4PM on Friday and two on Saturday, before the first round of eliminations takes place earlier than normal for NHRA, beginning Sunday at 10AM.