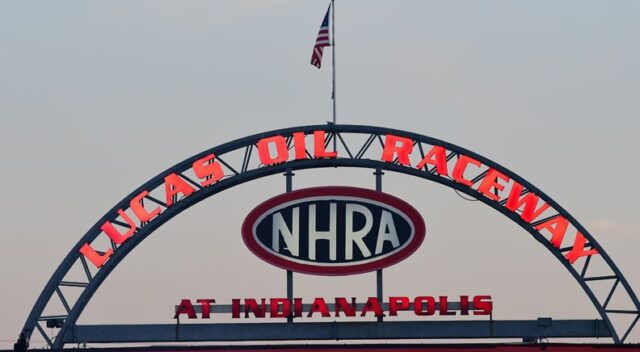 This year’s Big Go was different from everyone that came before. But that was to be expected, with the current pandemic and its requirements. The stands weren’t filled – not even for Friday night’s initial qualifying session – and neither were the pits, although the Lucas Oil Raceway’s grounds filled early with both professional Mello Yello racers and with Lucas Oil Sportsman competitors. In other words, it was a very 2020 race. 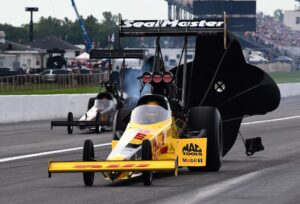 NHRA’s U.S. Nationals, this year sponsored by Denso Spark Plugs, had plenty to recommend it. There was only a short weather delay which, unfortunately, occurred during final eliminations and caused the network television coverage to be less than satisfactory for those who c couldn’t make the trip to Clermont, IN. The competition was fierce in all classes. Number One qualifiers won in two of the four Mello Yello categories and there were surprises, upsets and OMG moments throughout the race meeting.

As in all competitions, there were winners and losers. Shawn Langdon won his first Top Fuel race since 2016; racing with Kalitta Motorsports, the former class champion who raced two years in Funny Car, beat Leah Pruett, who’s been going through a drought of her own. Her most recent victory in the class came last year at Brainerd. When Don Schumacher Racing driver Pruett beat Steve Torrence in the semifinals and raced Langdon for the win, it elevated her to second place in the standings, just 50 behind Doug Kalitta, gone after the quarterfinals when he lost to Indy2 winner Justin Ashley.

After failing to win Indy2, the Summernationals raced at this same track in mid-July but continued to the Big Go due to a huge rainstorm, Jack Beckman took back the Funny Car points lead in DSR’s Infinite Hero Foundation Dodge Charger SRT Hellcat by beating Kalitta Motorsports’ J.R. Todd’s Toyota Camry Funny Car. Todd wasn’t happy with Beckman’s double-bulb start in the U.S. Nationals finals and swung at the 2012 champ (who swung back) instead of shaking his hand at the top end after the race. 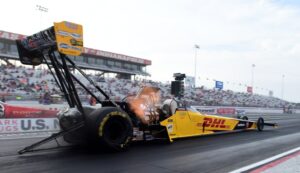 Todd’s final round appearance allowed him to leap-frog Ron Capps, the weekend’s No. 2 qualifier for fourth place in what was an all-DSR top four in class. Beckman now has a 35-point lead over teammate Matt Hagan (who won Indy2), 57 over Big Go top qualifier Tommy Johnson Jr. and 130 head of Todd. The U.S. Nationals, being a point-and-a-half race, caused quite a few flip-flops in the points department.

In Pro Stock, the story of the race – outside of No. 6 qualifier Erica Enders’ revenge victory (over P4 qualifier Matt Hartford) at the U.S. Nationals – had to be the story of Mason McGaha, who took out his father Chris, the No. 2 qualifier at this race, then beat fellow rookie Kyle Koretsky before falling to Enders in the semifinals. This was a race where Greg Anderson earned his 105th No. 1 qualifier, yet fell to teammate Jason Line in the second round. After Koretsky banished former points leader and Enders’ Elite Motorsports teammate Jeg Coughlin Jr., she assumed the lead by seven points over Coughlin, with Line (-11), Hartford (-162) and Anderson (-163) in pursuit.

You never forget your first win and, most certainly Matt Smith Racing’s Scotty Pollacheck will cherish this victory for a long time, especially coming against former points leader and six-time champion Andrew Hines’ Harley-Davidson. Pollacheck earned his first 200mph lap on the MSR EBR in Saturday qualifying to take No. 1 and followed up with similar pace on Sunday, where and when it mattered. He now has 25 points in hand over Hines, with H-D four-time champ Eddie Krawiec in third, boss Matt Smith in fourth and Indy3 winner Angelle Sampey fifth on the third Vance & Hines H-D. 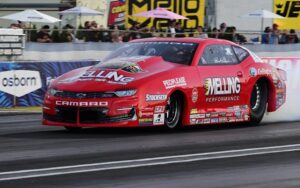 While there were overflow entries in every class for the U.S. Nationals, what happened post-race could affect the balance of the season and next year’s races as well. Before the pandemic changed this world, NHRA paid out $50,000 to win in nitro categories. That went down to $35,000 before the first re-start race at Lucas Oil Raceway, held the second weekend of July.

On the Tuesday after last weekend’s Denso Spark Plugs U.S. Nationals, NHRA announced another round of reductions in payouts. Now the nitro categories are being paid $15,000 to win, runner-up getting $11,500 and semifinalist receives $10,000.

It’s even deeper in the Pro Stock Car category where a win isn’t even worth five figures. $6,000 to win in Pro Stock and Pro Stock Motorcycle has it even worse, with $3,000 for the Wally, from here to the end of the season. 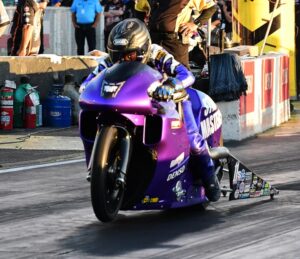 With many sponsors lessening their loads due to fewer races, this reduction isn’t about to pay tire, fuel and certainly not lodging and transportation bills. As Matt and Angie Smith remarked, “Up until this virus hit, it was $10K to win and $1,250 just to make the show. If you won one or two races and finished in the top 10 in points, you could make $50-100,000. Now if you win all five of the races left, it’s only $15,000. It’s just a joke.”

It’s been said this pandemic could kill racing, but NHRA has proven its worth with these four fan-friendly events in Indiana. NHRA has tightened its belt, particularly in the communications department, but they sure haven’t been kind to the competitors that keep them in business. It remains to be seen if there will be a boycott by racers for the Amalie Motor Oil Gatornationals the final weekend of this month, but the talk is already plenty loud about staying home because the cost of racing has just gotten too high.