What was intended to be a 24-race season for the NHRA’s professional tour has turned into 11 contests, thanks to the novel coronavirus, COVID-19. What started as the Mello Yello Drag Racing Series is arriving at the season’s closer as the Camping World Drag Racing Series. Yes, it’s been a very strange year, but at least we’ve had actual racing with fans on-site to counterbalance the negativity of the pandemic.

Now it’s time to take on the Camping World championships in Top Fuel, Funny Car, Pro Stock and Pro Stock Motorcycle, together with E3 Spark Plugs Pro Mod and Top Fuel Harley, all of which will be decided on The Strip at Las Vegas Motor Speedway. This weekend also marks Halloween, the end of Daylight Savings time and yes, a full moon (for the first time on Halloween since 1944).

All competitors in the Dodge NHRA Finals presented by Pennzoil will be racing for points-and-a-half, which could shake up every one of the competitions. There are 168 points up for grabs in each class, including bonus qualifying points and 30 points per round. Is that enough intrigue?

As expected, at last weekend’s delayed SpringNationals in Houston, the standings changed once again. While Steve Torrence, Matt Hagan, Erica Enders and Matt Smith each retained leads in their respective title chases, the conga line behind them moved every which way after the results were tallied.

The balance of the dragster Top Ten include Don Schumacher Racing’s Antron Brown (-334), rookie Justin Ashley (-383), the absent Terry McMillen (-432), Tony Schumacher (-453) and Clay Millican, who lies 454 points behind the class leader. These ten racers will remain in their elevated class as 11th placed Doug Foley is 600 points back, but the standings within the Top Ten has the ability to shuffle greatly, depending on who comes out of the truck best for two qualifying sessions on Halloween Saturday. There are 16 entries on the list so no one goes home.

One fact about the 2020 Funny Car championship chase is settled: the winner will come from Don Schumacher Racing, as its four Dodge Charger SRT Hellcat pilots line up first through fourth: Matt Hagan leads last weekend’s winner Tommy Johnson Jr by 42 points after being defeated by TJ. Jack Beckman, who’s been either first or second throughout the protracted season now holds third place points, just one behind his candle-making teammate, while Ron Capps has the most difficult chore to make up points as he’s 163 behind Hagan.

Ford Mustang racer Bob Tasca III holds fifth place, yet is 247 points behind Hagan, while J.R. Todd and his Kalitta Motorsports Toyota Camry are sixth, 258 points in arrears. Mustang racer Tim Wilkerson, who was tenth in last year’s championship is in seventh place and 272 points back, while star-crossed Alexis DeJoria, whose Toyota Camry’s blow-ups have provided too many highlight reels, holds eighth place (-353) heading into these finals. Cruz Pedregon’s Dodge Charger SRT Hellcat and Paul Lee’s Toyota Camry bring up the back of the Top Ten in the flopper class, where 18 entrants will contest these Dodge NHRA Finals, presented by Pennzoil. 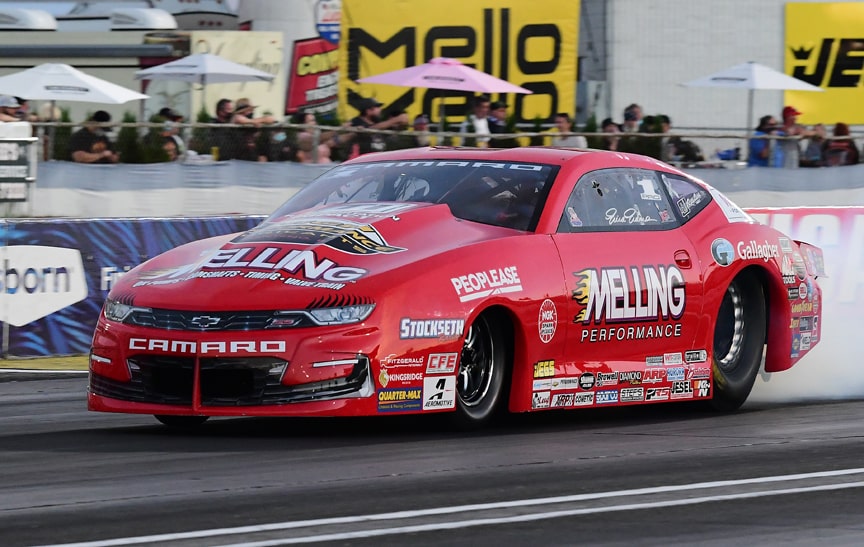 Erica Enders is on the verge of attaining her fourth Pro Stock championship with her Elite Motorsports’ Chevrolet Camaro and has only two true competitors who could take her second straight title away: that would be her teammate Jeg Coughlin Jr. and both Elite driver’s most feared competitor, Jason Line of Summit Motorsports. In a class where the top racers drive Camaro race cars, it’s the nuances in preparation and each driver’s capabilities that will cull this tight field. Both Coughlin Jr. and Line, each of whom intends to vacate the class at the end of this weekend’s race, are 55 points behind Enders.

Aaron Stanfield’s Houston victory mixed up the field behind the three top combatants. Line’s teammate Greg Anderson is a distant 183 points behind Enders, while Matt Hartford is 206 back, Alex Laughlin stands 222 behind the leader and last week’s winner, Aaron Stanfield holds 483 seventh place points, 270 behind his technical partner. Chris McGaha (-319), Deric Kramer (-348) and Bo Butner (-355) round out the top ten in points. This one should be a nail-biter for the championship while points behind those top three should vacillate over the weekend, especially with 21 entries, including Elite team owner Richard Freeman. 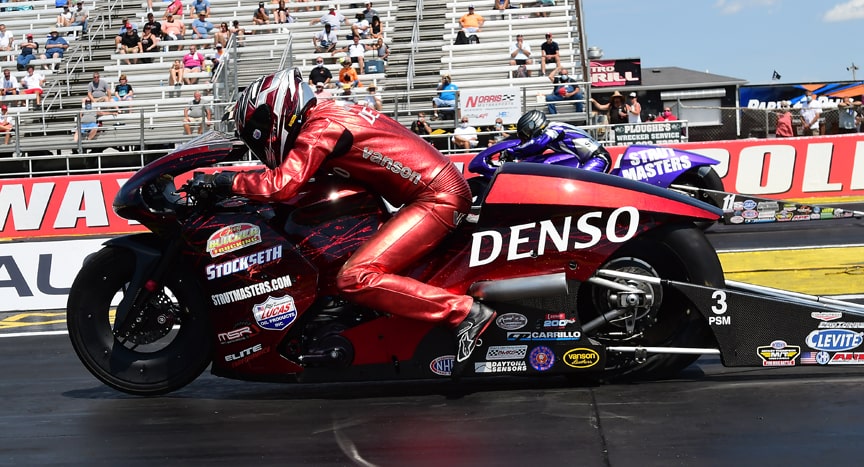 And then there’s Pro Stock Motorcycle, which has pretty much been the province of Matt Smith Racing and its EBR motorcycles in 2020. After Vance & Hines’ Andrew Hines achieved his sixth Pro Stock Motorcycle title last year, his Harley-Davidson Screamin’ Eagle teammates have had a better year than than he. But no one’s done better than Matt Smith, who holds a 78-point advantage on teammate Scotty Pollacheck as they come down to the wire. Smith’s had a few hiccups that allowed Eddie Krawiec, the most recent race winner to tie Pollacheck, while Hines is in fourth, 86 points back and the third H-D rider, Angelle Sampey lies fifth, 135 points behind Smith.

Ryan Oehler’s season-starting victory on his family-owned EBR has him sixth, a lengthy 183 points behind Matt Smith, while Angie Smith who, like teammate Pollacheck joined the Denso 200mph club this season, is seventh, 241 points behind her husband. Hector Arana Jr’s Buell claims eighth, while last year’s runner-up, Jerry Savoie joins fellow Suzuki racer Steve Johnson bringing up the back of the Top Ten; they are 259 and 279 points back, respectively. With 17 entries for this season finale, everybody’s got to be on their game.

There’s a lot on the line this weekend, including the four championships that will crown the first ever NHRA Camping World Drag Series winners, in what NHRA hopes will be a long-term partnership. The weather will be typical for Las Vegas this time of year: nice, warm days on Saturday and Sunday with nary a cloud in sight, followed by cool or chilly nights.

The Strip at Las Vegas Motor Speedway always produces exciting competition and this year should be no different. While Pro Mod’s champion is traditionally crowned in Sin City, this year attendees will have the opportunity to see all pro and amateur champions earn their titles. With points-and-a-half in play and everything on the line, the tension should be palpable.