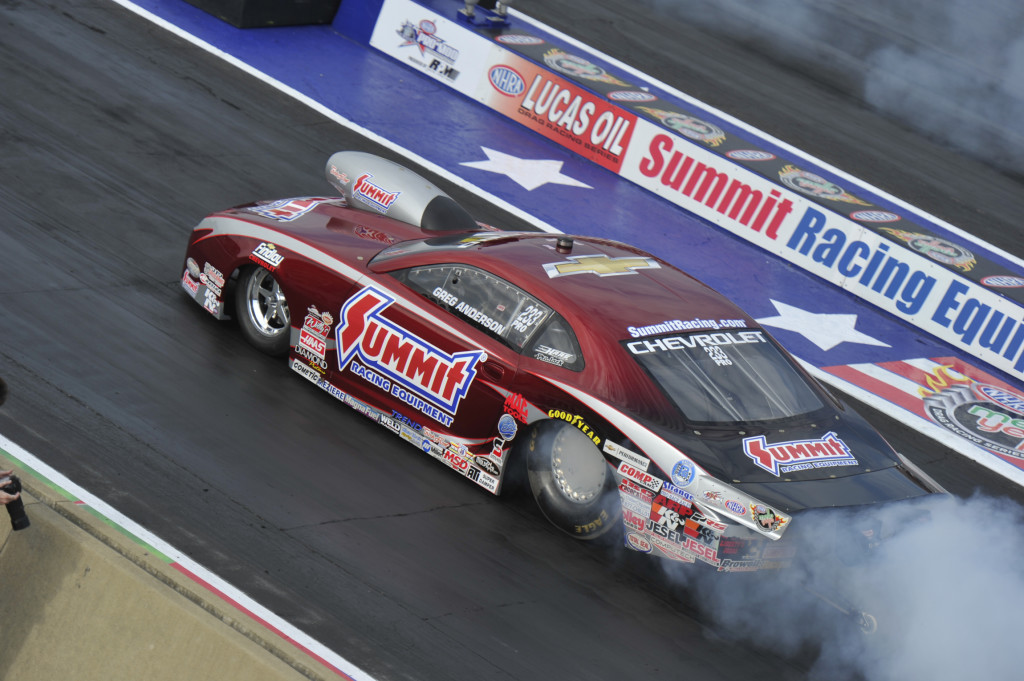 Doug Kalitta created havoc on the starting line with another Kalitta Racing mosh pit celebration after whipping Antron Brown in the Top Fuel final.  Jack Beckman fended off the entire John Force Racing Funny Car fleet to win the nitro portions of the Summit Racing Equipment NHRA Nationals and Pro Stock’s Greg Anderson held up under the pressure of racing during his car sponsor’s namesake event in Norwalk, OH.

Doug Kalitta picked up his second win of the season, earning his 37th Top Fuel career victory by powering past defending event winner Antron Brown in the final round.  Kalitta, also the event’s No. 1 qualifier, covered the distance in 3.823 seconds at 322.34 mph while Brown’s Matco Tools dragster lost traction and trailed with a 3.918 at 307.79.

“This is our hometown track and it was great having a lot of family and close friends here, so it doesn’t get much better than that,” said Kalitta, whose team is based in Ypsilanti, Mich.  “Even my mom actually showed up.  I think she’s only shown up one other time in my entire career.  She watches it on TV quite a bit, but doesn’t come too often.  I’m going to have to tell her that she has to come out [again since] we won with her here.”

Kalitta used the good vibes from the home track advantage to race past Chris Karamesines, Steve Torrence, and Clay Millican in earlier rounds.  He moved to third in points with the victory.  Runner-up Brown and semifinalist Tony Schumacher are first and second overall in the series standings.

It was a wire-to-wire job for the Mac Tools team with Kalitta resetting the track record in qualifying with a 3.731 second pass.  That earned him his first number one qualifying spot of the season and the second of his legendary career at Norwalk, winning from the No. 1 spot for the first time since 2004.

Jack Beckman and crew chief Jimmy Prock have taken their 2015 Dodge Charger Funny Car up to a new level when it won for the third time this year and moved up two spots to No. 3 in points by winning the NHRA Mello Yello Drag Racing Series event in Norwalk, Ohio.

“We came [to Norwalk] with a brand new front half of the [chassis] and an entirely new bellhousing combination because that’s what Jimmy Prock does.  We ran the first three qualifying runs this weekend, then switched back to our old combination and it smoked the tires again.  It only made it down the track one time in [four qualifying sessions] and we end up 11th, and have John Force in the first round.  But we ended up in the winner’s circle.  This race was awesome because of what we had to overcome.”

Also in Funny Car, Matt Hagan was upset in the second round by Courtney Force after he set Norwalk records for elapsed time on Friday night and then improved on that to earn his third pole of the year with a run of 3.973 that his career best and ninth quickest ever.  He also set the track speed record at 322.96 mph Friday.

Hagan increased his points lead to 120 over teammate Ron Capps, and with Beckman moving up to third, it gives DSR the 1-2-3 spots in Funny Car.

On Sunday at Summit Motorsports Park, Greg Anderson accomplished exactly what he set out to do when he scored victory in Norwalk.  Anderson earned the 78th national event trophy of his career with a final-round defeat of Drew Skillman.  It was the third win for Anderson in Norwalk and the fourth of the season for the driver who took over the points lead following the second round of eliminations at his sponsor’s event.

“We came here with high hopes, and we wanted to do so good in front of the Summit Racing folks,” said Anderson.  The Summit Racing Equipment headquarters are not too far from the Norwalk facility and are located in Tallmadge.

Anderson, starting from the No. 7 position, beat Allen Johnson in teh first round.  Notably, Anderson’s win light came on his 900th round of racing, and only 11 drivers have contested 900 rounds or more in NHRA competition.

Then he knocked out Jonathan Gray, Chris McGaha before pairing up against Drew Skillman in the finals.

“These are good times, and I’m having a ball with it,” said Anderson.  “Pro Stock is a dogfight ever week, and you feel fantastic at the end of the day if you can find a way to conquer it.  If you can win your sponsor’s event, it doesn’t get any better than that.  It means the world, and that’s what got us to the winner’s circle today, without a doubt.

In only the third pro final round featuring a pair of female finalists in NHRA history, Karen Stoffer defeated Angelle Sampey to take the Pro Stock Motorcycle win.  Stoffer earned her second win of the season and eighth of her career on her Suzuki when a frustrated Angelle Sampey fouled with a red-light start on her Star Racing Buell.

Stoffer, who was only planning to race a limited schedule this season, finds herself in second place in the points as the two-wheel category’s only multi-time winner this season taking the Gatornationals title, 45 back of series leader Eddie Krawiec.

“I certainly can’t imagine the way this season has gone,” said Stoffer, who defeated a trio of world champs, Matt Smitth, Krawiec and LE Tonglet to reach the final.

Her win over Sampey avenged the only other final round meeting between the two veteran riders.  Sampey beat Stoffer at Reading, PA. in 2002.  The only other Mello Yello Series final to feature an all-female pairing happened in Top Fuel in 1982 when Shirley Muldowney defeated Lucille Lee in Columbus, Ohio.

“Racing Angelle in a final for the first time since 2002 was interesting,” Stoffer said.  “We both struggled here, so we had to race a couple of times in qualifying.  It was great to race her in the final.  I would have liked to have seen two green lights, but we all live and die by the Tree in this class.  We managed to get our tire hooked up, and we went down the track, so I think we’d have been in good shape no matter what.”

The NHRA Mello Yello series moves on to Chicago for next week’s Route 66 Nationals on July 9-12.