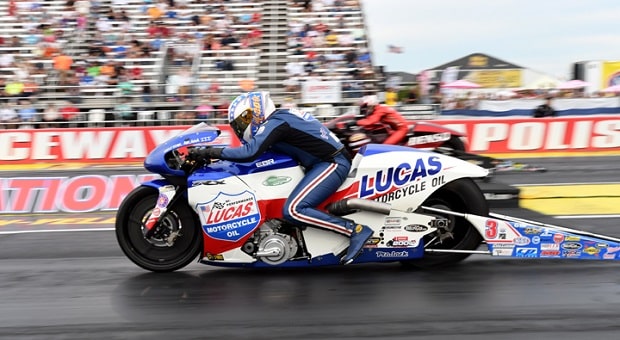 As it did days earlier with the Pro Stock car category, the sanction moved a few races here and there. Also as with like Pro Stock, NHRA elected to have the motorcycle class compete in five Countdown to the Championship contests rather than the six races its nitro categories, Top Fuel and Funny Car, will contest.

The tradition of starting the Pro Stock Motorcycle season with NHRA’s visit to the Amalie Motor Oil Gatornationals in Gainesville, Fla. remains a constant, as does the trip to Las Vegas for its springtime four-wide competition.

Like Pro Stock, the motorcycle class will skip the four-wide contest at Charlotte, but will join the four-wheel stockers in Atlanta. Moving to Richmond and then Bristol, the class will give Joliet a miss this year, but will race at Norwalk.

The motorcycles will contest the full Western Swing with back-to-back races, as usual in Denver and Sonoma, adding a race in Seattle, which has not been the case in previous years. The class closes its “regular season” in Indianapolis – the biggest straight-line gathering of the year – at the U.S. Nationals.

The decision to take Pro Stock Motorcycle to all three Western Swing contests is a departure from the past and allows the two-wheel set to compete in the Pacific Northwest for the first time. This is also the first time for the class at Houston and Bristol, which have traditionally been limited to four-wheels classes.

The five contests on the Pro Stock Motorcycle Countdown to the Championship take place at Reading, Charlotte, St. Louis, Las Vegas and Pomona, with the motorcycles sitting out NHRA’s fall trip to Dallas.

NHRA continues to tweak competition in its Pro Stock classes, but will have the nitro competitors in all 24 contests on the schedule in 2020. NHRA will release updated schedules for Pro Mod, Factory Stock Showdown and Top Fuel Harley in the near future, while the national event schedule for the sportsman NHRA Lucas Oil Drag Racing Series is expected to be released later this fall.