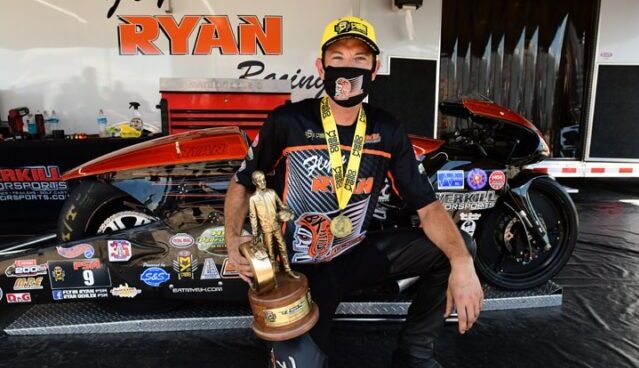 The two days started and ended abnormally early with all on-track competition completed well before 3PM on Sunday afternoon. Saturday afternoon’s dual qualifying sessions went until the skies opened, or right around 5PM, with several dragsters still waiting for their second opportunities to post laps. Fans were able to mingle in the pits and could, occasionally, chat at a distance with drivers and crews.

Aside from the late afternoon storm on Saturday, the weather was good for racing, if a bit warm. And since none of the combatants had been on a track in anger since late February, tune-ups had to be massively adjusted to accommodate both the conditions and competitors’ lack of recent racing.

One condition that couldn’t be readily addressed was the elephant in the room: the absence of a four-car John Force Racing team, despite the group’s two-mile proximity to the track. There were plenty of rationales offered for the absence of Force, his daughter Brittany, son-in-law Robert Hight and up-and-coming dragster driver Austin Prock. The only one that made any sense was John Force’s age and his previous physical issues. Still no official comment from JFR, though.

The festivities sent on without them, physically, but the big screens regularly offered memories of the Force family’s exploits on this and other NHRA tracks in the past. They were missed, but there was plenty of action to sate fans of the sport. And plenty of good stories. 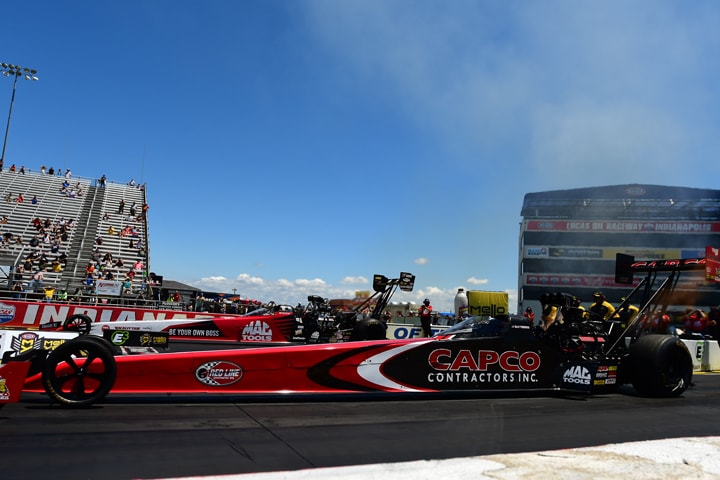 Doug Kalitta continues to show why he’s worthy of a Top Fuel title. Kalitta came into this race riding atop the point standings and, without a Countdown to the Championship in 2020, if the versatile driver continues to go rounds, he’s a prime contender for the title. Kalitta showed again, in acing his 700th round win in the semifinals – only Tony Schumacher has 700 round wins in his career – why he’s among the best this series has ever known.

Kalitta came up short against Billy Torrence, but his third appearance in the 2020 finals added to a tally that has him more than 100 points ahead of Steve Torrence, who has nine points on his father, earned by winning at Phoenix in late February. Leah Pruett stands fourth after falling to Kalitta in the quarterfinals, followed by her Don Schumacher Racing teammate Antron Brown, the absent Brittany Force, Shawn Langdon, Clay Millican, Justin Ashley and absent Austin Prock. 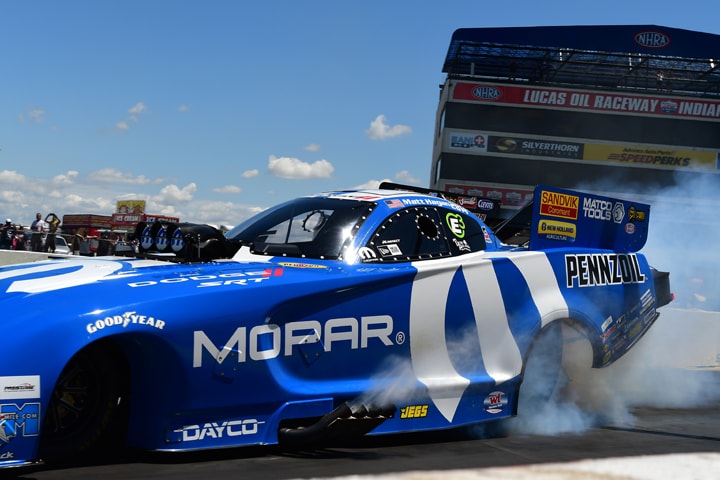 The hottest hand in Funny Car last weekend belonged to Tommy Johnson Jr., who was No. 1 qualifier and went to the finals, where he fell to his DSR teammate Matt Hagan. In the last four races, DSR’s Dodge Charger SRT Hellcats have held winning hands, going back to Jack Beckman’s finals win last November. With hot temps on this track, the difficult floppers weren’t able to put down many sub-4-second passes, but Johnson did just that in his first three appearances on Sunday. 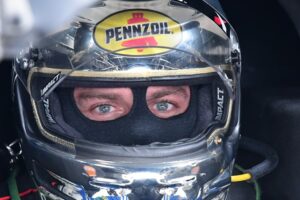 Pro Stock came down to two drivers who intend to retire at the close of this [now] 18-race season. It was a tight battle between Jason Line and Jeg Coughlin Jr. that had Line the victor. What the results for Pro Stock don’t show is the health of the category, where more next-generation racers are coming to play. Consider that there were 21 cars on the grounds and only one of the newbies, Chris McGaha’s son Mason, was 17th qualifier. That allowed first-timers Bruno Massel, Kyle Koretsky, Troy Coughlin Jr and Greg Stanfield’s son Aaron the opportunities to race, while the three-car Cuadra Racing team were on the outside looking in. 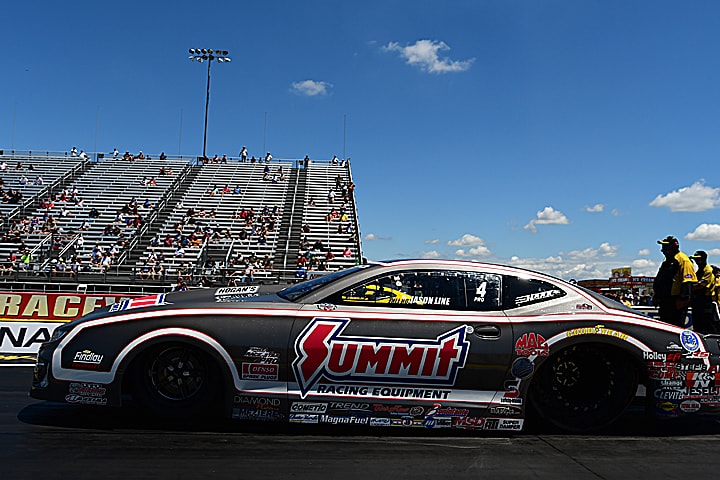 Only Stanfield made it past the first round but was stopped in the quarters by his Elite Motorsports teammate and reigning, three-time champion Erica Enders. Line had to battle teammate Greg Anderson in the semis while Coughlin had to dispense with Elite teammate Enders in order to reach the final round. Coughlin remains the points leader, with Line just eight points behind him, while Enders, Kenny Delco, Bo Butner, Chris McGaha, Alex Laughlin, Anderson, Matt Hartford and Stanfield make up the top 10. This class will not be racing at Lucas Oil Raceway this coming weekend.

The E3 Spark Plugs NHRA Nationals marked the start of the Pro Stock Motorcycle season, which had intended to begin at Gainesville, so the two-wheeled set hadn’t turned a wheel in anger in nearly nine months. During Sunday’s passes, that was evident by the second-round fouls. it was difficult to cut a light in the tension-filled eliminations and, while some of the riders we expected to see in the second round made that trip to the water box, they weren’t effective once the burnout was complete. 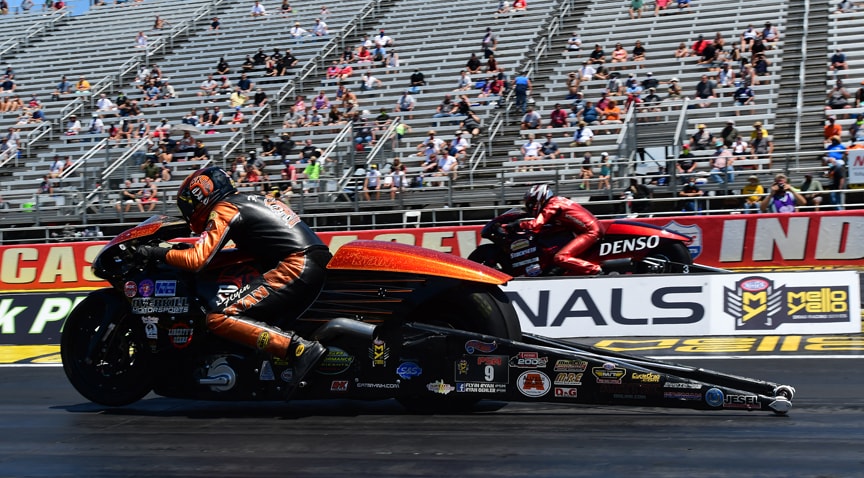 In fact, top qualifier Eddie Krawiec and his teammate Angelle Sampey were gone by the close of the second round, while their six-time Vance and Hines Harley-Davidson champion Andrew Hines made it as far as the semifinal round. Hector Arana Jr., the first rider to 200mph in this class, fell to eventual winner Ryan Oehler in the semis, while Matt Smith benched Hines. In a straight-up match, Oehler defeated Smith in his first-ever final round to earn his first Wally winner’s trophy, after qualifying an effective fifth on his EBR. Last year’s runner-up, Jerry Savoie was gone after the first round.

It was definitely exciting to see a first-time winner in the Pro Stock category; Oehler has been knocking at that door for at least the past season and, after this race he’s batting 1,000, leading the standings after earning the first PSM win of the year for his own team. Smith is second, Hines third, Arana Jr. fourth, Krawiec fifth. They’re followed by Scotty Pollacheck, who fouled in his quarterfinal matchup, Angie Smith, Sampey, Steve Johnson and a tie between John Hall, Marc Ingwersen and Savoie for tenth place.