A full month after its opening salvo, the NHRA’s Camping World Drag Racing Series is back in action this week and it’s going to be a wild event. This weekend’s DENSO Spark Plugs NHRA Four-Wide Nationals onThe Strip at Las Vegas Motor Speedway marks the first time in a year and a half that the drag racers have conducted a four-wide event.

Both the Las Vegas and Charlotte (zMax Dragway) events were forced cancellations last year and nobody has raced four wide since Charlotte in 2019. That’s a long time.

This weekend’s activities include all four Camping World categories: Top Fuel, Funny Car, Pro Stock and Pro Stock Motorcycle. There will also be nine Lucas Oil Sportsman classes on site, including both Top Alcohol Funny Car and Dragster. No Pro Mod or Top Fuel Harley entries for this race, but they will both be in Sin City come the fall competition. There will be three qualifying sessions, one for Friday, two on Saturday and eliminations on Sunday.

Unfortunately, only 15 Top Fuel dragsters are on the entry list for this four-wide event, so everyone will get the opportunity to compete come Sunday. Josh Hart, the Ocala-based racer who won Top Fuel at his Gainesville, FL home event last month, did not make the cross-country trip, but the balance of the dragster field is stout and boasts winners in their midst. 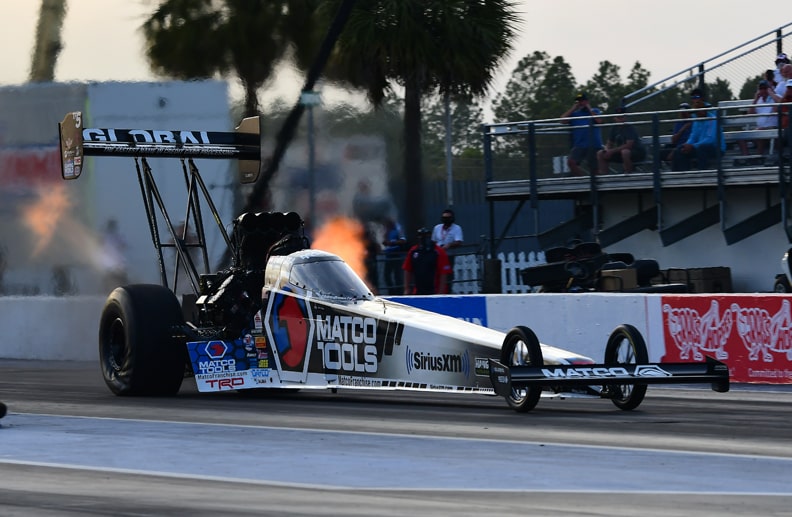 Notably, Antron Brown from Don Schumacher Racing will be looking to bookend his Las Vegas experiences, having won the season finale last fall. He will have to contend with reigning titleholder Steve Torrence and his father Billy, both of whom exited in the first round at the season opener. Kalitta Motorsports’ Doug Kalitta, who has raced to the final quad on three occasions since NHRA initiated this format, is still looking for his first four-wide victory; teammate Shawn Langdon, runner-up at the Gatornationals last month has a single four-wide victory in Funny Car on his resume. “I like four-wide racing because it is different,” Langdon said. 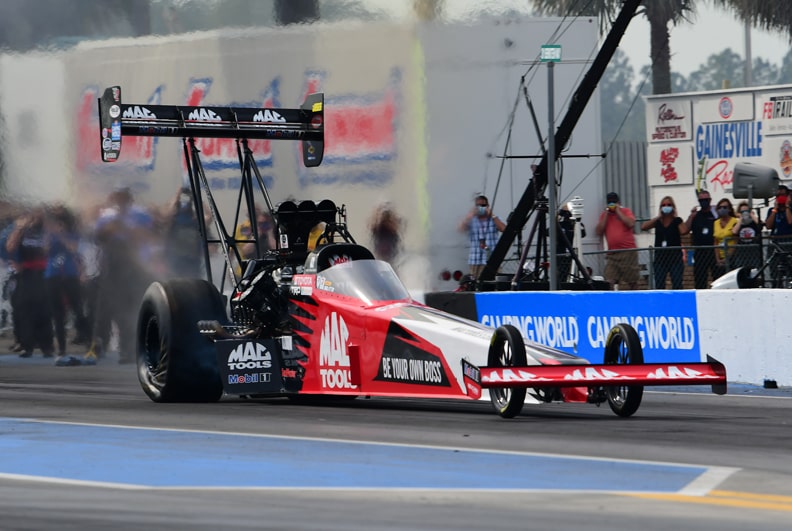 Sophomore Justin Ashley has never raced four across but is looking forward to the challenge, he said. With the intent of not over-thinking what he has to do, should Ashley end up in the more difficult No,. 2 or 3 lanes, “I have a good routine and I will just follow that.”

The Strip at Las Vegas Motor Speedway has been a happy place for Brittany Force and her Flav-R-Pac John Force Racing Top Fuel team led by David Grubnic’s tuning. At the penultimate 2019 race, Brittany Force picked up the Wally winner’s trophy; she’s hoping to do that again: “Vegas is one of my favorite tracks on the circuit and winning at your favorite track is something that can’t be beat,” she said.

Others worth watching in Top Fuel include the always dangerous Clay Millican, who is partnering this weekend with MSI National and GARAGEpipe, Leah Pruett of DSR, West Coast regulars Todd Paton, Troy Buff, Rob Passey, Cameron Ferre and James Maroney. 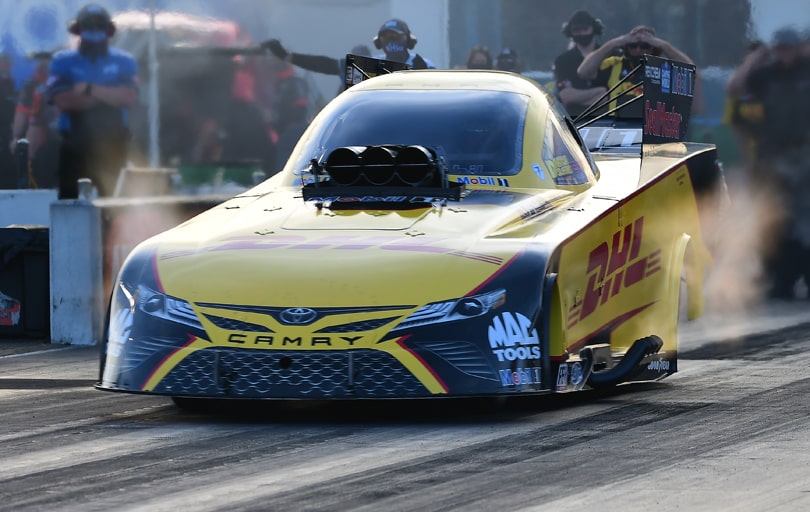 Gatornationals Funny Car victor J.R. Todd, racing a Toyota Camry for Kalitta Motorsports, is excited about a return to Las Vegas, a venue where he’s had great success, whether racing one or three competitors, and in Funny Car or Top Fuel.

This weekend there are 18 racers entered in he Flopper category, which means two won’t make the cut. Todd, who’s won the previous two four-wide races is looking for his third win at the track this weekend. “You want to get off the line quick and keep it straight,” he said of attacking this track along with three other racers. “You have to pay more attention and really listen to your crew chief or crew boys when they are telling you who is in the other lanes.”

Todd is expecting an interesting race and is looking forward to the number of racers he’ll have to vanquish in order to take home his second trophy of the year. It’s tough enough having to race the two Don Schumacher Racing Dodge Charger SRT Hellcats of reigning champion Matt Hagan and 2016 titleholder Ron Capps, but with the return of Chevrolet Camaro SS racers John Force Racing, the big guns of 16-time champ John Force and 2019 titleholder Robert Hight means big numbers for speed and low ETs for the weekend.

It’s definitely a challenge and one each driver is intent to own. From the Ford Mustang camp, there’s Bob Tasca III and Tim Wilkerson, who will be joined by Terry Haddock, Blake Alexander (in Jim Head’s Mustang), Chad Green and Steven Densham, along with Jonnie Lindberg and Bobby Bode III. Other Toyota Camry drivers are Alexis DeJoria, Jeff Diehl and Alex Miladinovich, while Cruz Pedregon, Jim Campbell and Christopher Morel are racing Chargers this weekend. 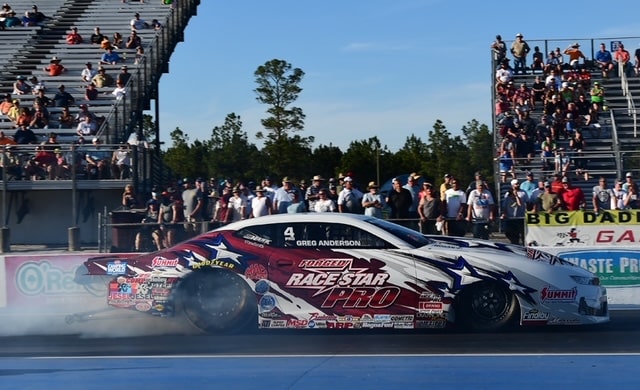 Pro Stock points leader Greg Anderson has two four-wide victories to his credit, gained at Charlotte in 2011-12. The winner of 95 class contests after his Gatornationals victory Anderson, just two wins behind Pro Stock record-holder Warren Johnson, races “because this is what I love to do, and I love to win. I’m just going to try to get as many as I can,” he said after his most recent victory. Racing the prevalent and popular Chevrolet Camaro for KB Racing, four-time champ Anderson has plenty of challengers to contend with this weekend, as 18 cars are entered in class.

One of those perennial challengers is Erica Enders, who claimed her fourth Pro Stock championship at this track last fall. This class is loaded with second generation drivers looking to make their marks and veterans hoping to attain more of their own. The winner of 2019’s Las Vegas four-wide race is not on the entry list as Bo Butner declined to race this weekend. 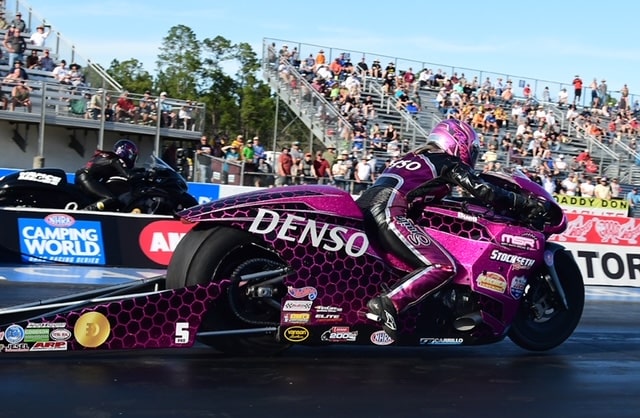 Angie Smith was the winner last fall at Las Vegas, even as husband Matt Smith secured his fourth Pro Stock Motorcycle championship at the track. It was her second victory, but she really missed the interaction with The Strip’s rabid fans. With her sponsor DENSO spark plugs the primary sponsor of this race, both Angie and Matt Smith will be hoping to bring home the hardware for them. At the 2019 Las Vegas four-wide race, it was Hector Arana Jr. first to the timing lights at the end of the track’s uphill quarter-mile.

The Smith family, along with teammate Scotty Pollacheck, are riding EBR motorcycles, There are 12 entries listed for this race, but Joey Gladstone, who races with Cory Reed, won’t be making any passes for a while following a nasty testing accident last weekend that left him with broken ribs, a broken scapula and bruised lungs. He was released from hospital on Tuesday of this week but won’t be traveling for the short term. Neither will fellow Suzuki rider Chris Bostick who went down on a Reed Racing EBR the day before Gladstgone’s incident. David Barron’s Buell had an incident the same weekend at the same track, so all three are out of action for now.

Those absences will open doors for Angelle Sampey on her four-valve Vance & Hines Suzuki, veteran Steve Johnson, Jerry Savoie, Freddy Camarena, Reed, Karen Stoffer and Kelly Clontz on their Suzukis. The non-Smith EBR crowd will be led by Ryan Oehler and returnee Chip Ellis. The defending winner of this race, Arana Jr. is not on the official entry list.

The Las Vegas weather forecast calls for temps in the high 70s to low 80s for the weekend, with no chance of precipitation. With qualifying sessions at 3:30PM Pacific on Friday, 1PM and 3;30PM Saturday and with eliminations scheduled for the crack of noon on Sunday, this looks like a great weekend for racing. Of course scheduled times are one thing; reality in drag racing is definitely another. Sunset should be done by the time the racers are finished qualifying, leaving the jet cars to perform their magic in the evening light.

About Anne Proffit 661 Articles
Anne Proffit traces her love of racing - in particular drag racing - to her childhood days in Philadelphia, where Atco Dragway, Englishtown and Maple Grove Raceway were destinations just made for her. As a diversion, she was the first editor of IMSA’s Arrow newsletter, and now writes about and photographs sports cars, Indy cars, Formula 1, MotoGP, NASCAR, Formula Drift, Red Bull Global Rallycross - in addition to her first love of NHRA drag racing. A specialty is a particular admiration for the people that build and tune drag racing engines.