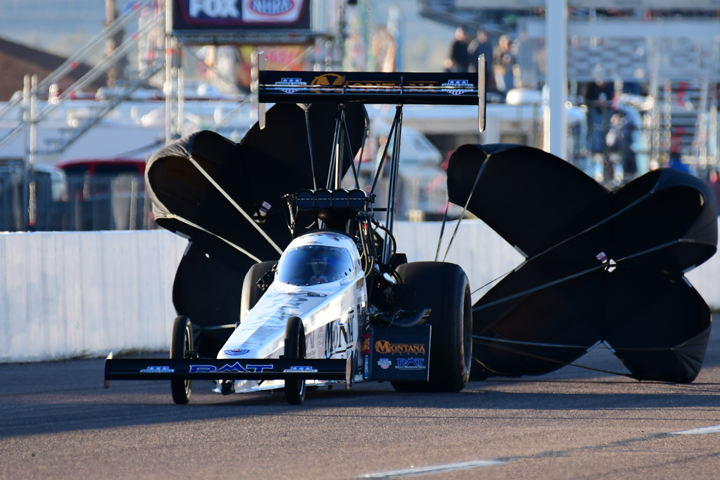 Hard to believe this is only the 19th time NHRA’s Mello Yello series has encamped at Bristol Dragway, home of the NHRA Thunder Valley Nationals. The picturesque bowl outside Bristol, Tenn. has seen many extraordinary straight-line feats on its 1,000-foot dragstrip and will likely do so again this coming weekend, June 14-16, 2019, as NHRA holds the 11th race of the year for Top Fuel and Funny Car competitors.

This is the third of four-in-a-row races for the two premier classes, as the tour marches from Joliet to Topeka, now Bristol and, finally, Norwalk, Ohio. It’s a rough journey, but at least all venues are in the heartland of the country and feature similar weather patterns. It can be hot and sweaty one minute in Bristol and a thunderstorm can arrive and depart with equal swiftness. The changing weather is always a challenge for crew chiefs. 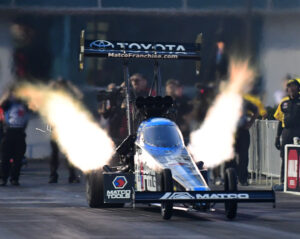 At this point, it appears the only guy who can put the kibosh on 2018 Top Fuel champion Steve Torrence is his dad, Billy. By racing one another in last weekend’s finals in Topeka, they showed some of the multi-car teams that successful drag racing can be done family-style – and productively. Steve started his season slowly while Billy boomed out of the box and earned his first win of the year in Phoenix, race No. 2 in a 24-contest campaign.

Now Steve Torrence is steamrolling through the Top Fuel field, grabbing five consecutive Wally winner’s trophies to bolster his chances of earning a second consecutive championship. Still, succeeding at the start – or even the middle – of a long racing season like this one can be treacherous. Consider Courtney Force, who owned Funny Car throughout the regular season until the six-race Countdown to the Championship playoffs began after Indy last year; she faded to a sixth-place finish despite her four victories.

In Top Fuel, the Torrence duo is not the only guys ticking boxes. Three-time category champion Antron Brown has been steadily moving up through the dragster ranks since last year. After losing co-crew chief Brian Corradi to John Force Racing’s Funny Car team for daughter Courtney, Brown’s Don Schumacher Racing squad has done a rather slow reboot. Brown had an uncharacteristic sixth-place finish at the close of last year with a single victory; as NHRA approaches Bristol, the 11th race of the year, Brown’s in fourth place and only nine points adrift of P2’s Doug Kalitta. Will this be the weekend 66-race winner Brown (16 in Pro Stock Motorcycle) makes his breakthrough?

There are currently 16 cars entered in Top Fuel for this weekend’s race, and one of the drivers not on the list is Billy Torrence. We will have Pat Dakin on the grounds, along with Lex Joon and Audrey Worm taking on the full-time racers. Rookie Austin Prock, who made his first semifinal appearance last weekend at Topeka, is hoping to add to his 13-round win list at the Bristol track, one on which he’s never driven. There won’t be a repeat Bristol winner in Top Fuel as Tony Schumacher earned his sole 2018 win at the track and is not entered – again. 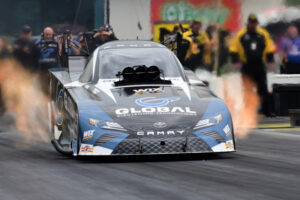 As in Top Fuel, Funny Car is looking the province of John Force Racing president Robert Hight, who earned his 49th career national flopper victory in Topeka, the track where he began his pro career 25 years ago, working on company founder John Force’s race car. Hight qualified his Chevrolet Camaro SS in the bottom half of Topeka’s field, yet rampaged through the competition to earn his fourth win of the year.

John Force, still looking for his 150th NHRA Funny Car victory would love nothing more on Sunday, Father’s Day. Daughter Brittany Force, the 2017 NHRA Top Fuel champion, claims she has a surprise for him on Sunday. We’ll all have to see what it is, but I’m certain John would like her surprise almost as much as that 150th win. He’s been trying since Denver of last year to turn on a win light and, while he’s come close, the 16-time Funny Car champion is still sitting at 149 wins.

There are 15 entries in the flopper class for Bristol and Hight is the leader of this pack by more than 300 points over Don Schumacher Racing’s Tommy Johnson Jr. John Force holds third-place points while DSR’s Ron Capps is the consecutive winner at Bristol the past two years. Capps, who recently picked up two victories in a row, is fourth. He, too, started the season slowly and once he swapped cars came alive at Atlanta. The 2016 Funny Car champ looks poised to add to his win total after an intra-squad battle with Tommy Johnson Jr. last weekend knocked him out in the quarterfinals. 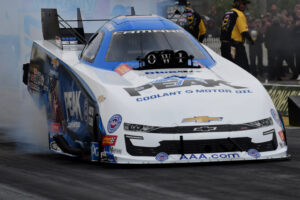 The Mountain Motor Pro Stock racers will perform another exhibition this weekend and Pro Mod is in the house as well. At this time, it appears that NHRA will miss inclement weather at Bristol, where it will become progressively warmer as the weekend goes along. With temps in the mid-70s on Friday, the second qualifying session should be an exciting one for fans on-site. There’s a light possibility of showers on Sunday, with temps in the low to mid-80s predicted.

No matter the weather, the competition in Thunder Valley will be hot, hard and fierce. There’s points and pride at play at this race, as NHRA prepares to meet its midway point in the final of four races in a row at Norwalk, Ohio, next weekend.