NHRA point leaders were all the rage at this weekend’s AAA Texas NHRA Nationals at Texas Motorplex. Along with Top Fuel king Steve Torrence earning his third victory in the Countdown to the Championship, defending event and world champion Robert Hight powered back from a recent injury to earn his second consecutive win of the countdown, while Pro Stock’s current young gun Tanner Gray continued to extend his points lead after a follow-up Countdown win. 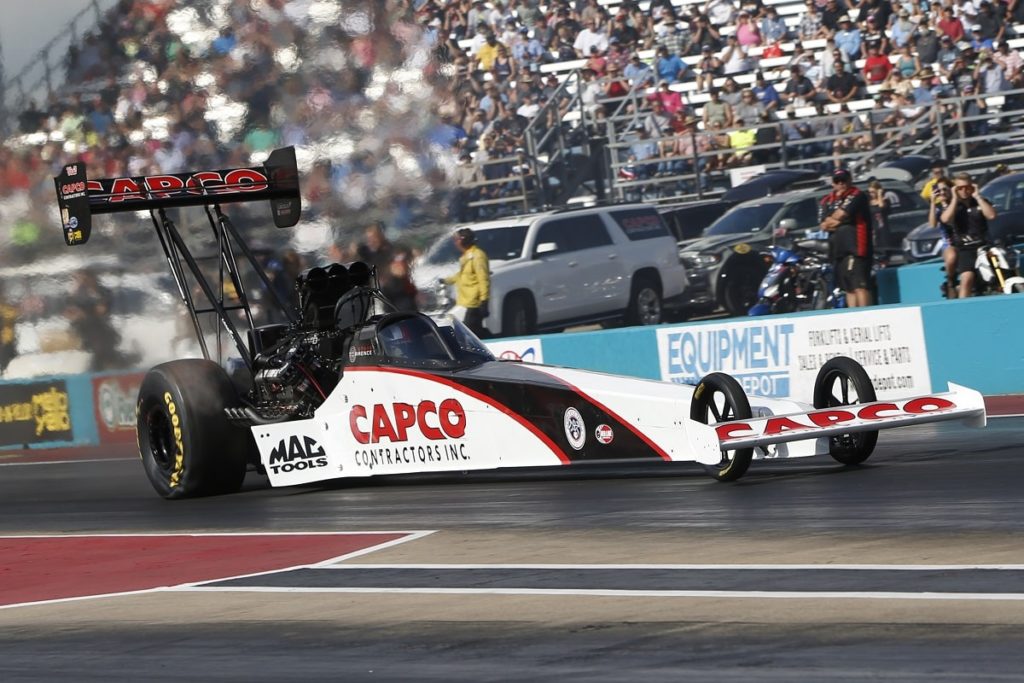 After returning home hot off his first two Countdown to the Championship wins, Top Fuel points leader Steve Torrence earned yet another win after taking down Bill Litton, Blake Alexander and eight-time world champion Tony Schumacher to take on Terry McMillan in Sunday’s final round. Much like his first two races of the Countdown, Torrence was back on top for the first time at his home track thanks to a 3.826-second pass at 321.04 MPH in Sunday’s final elimination round.

“I am thrilled to earn a win at my home track,” said Torrence. “We have been trying to earn a win at this track since 2010, and it is amazing to take this check this off my bucket list. In fact, I couldn’t be prouder to pull off a victory in front of everyone who was here this weekend.”

Thanks to yet another win this season, the Torrence Racing rocket ship now has a 103-point lead over Sunday’s runner up Clay Millican heading into the NHRA Carolina Nationals. 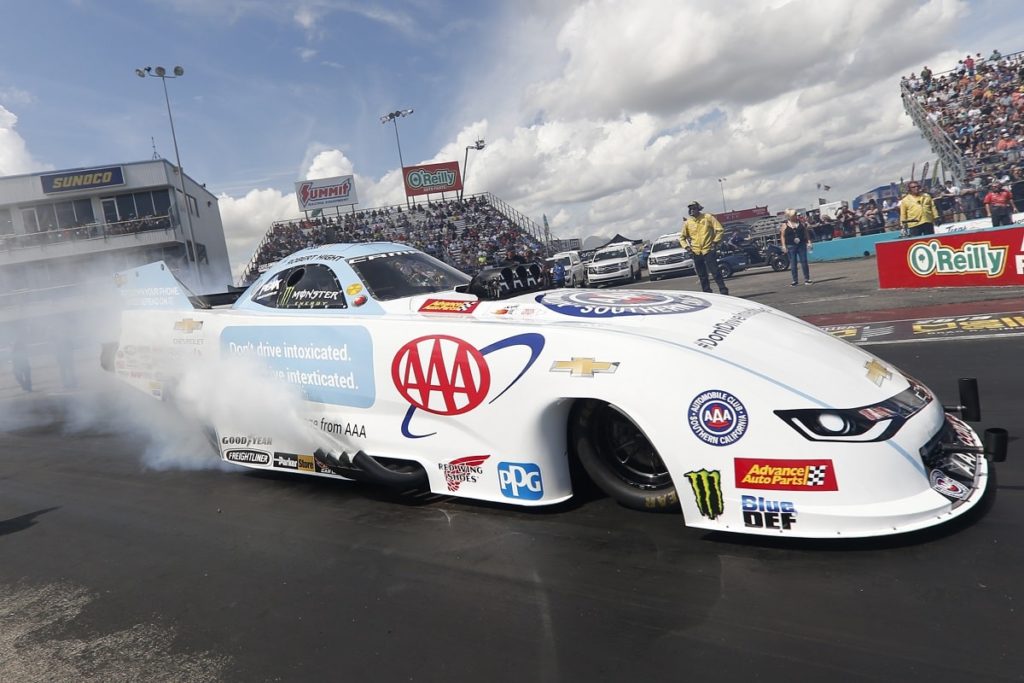 Torrence wouldn’t be the only driver to earn back to back Countdown to the Championship wins in Dallas. Returning to action after an engine explosion in St. Louis, which unexpectedly left defending event and Funny Car World Champion Robert Hight requiring surgery three days following the NHRA Midwest Nationals, Hight powered back to the top in Dallas.

After taking down Jim Campbell, Tim Wilkerson and Bob Tasca III, Hight’s recently damaged collarbone seemed not to bother him in the least as he moved on to Kalitta Motorsports recent speed demon J.R. Todd in Sunday’s final elimination round.

With a final pass of 3.955-seconds at 325.69 MPH in his Auto Club of Southern California Chevrolet Camaro SS, Hight would earn his fourth career victory at Texas Motorplex, 11th in the Countdown to the Championship as well as his 45th NHRA win.

“That was one of the biggest rounds I have ever raced right there,” said Hight. “Todd is No. 2 in points and he was 30 points behind me going into Sunday’s final round, and with this latest win my hard-working team will continue to celebrate as we continue in the points lead going into Charlotte.” 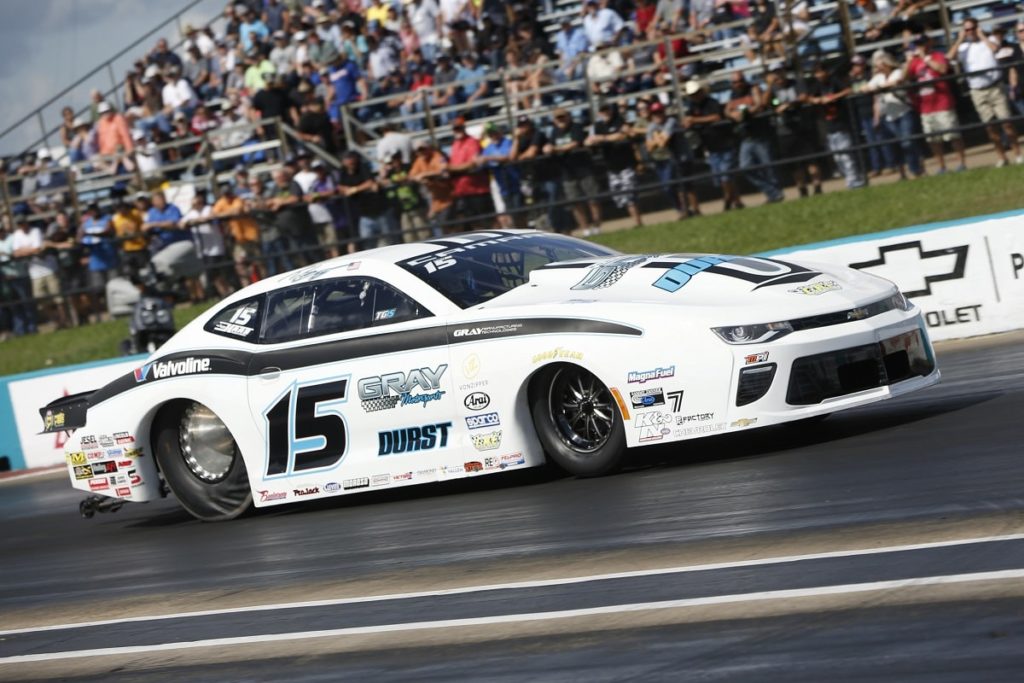 Pro Stock young gun Tanner Gray, who also had some pretty big news recently, also earned back to back Countdown to the Championship wins following the AAA Texas NHRA Nationals. After knocking off Deric Kramer, Greg Anderson and Matt Hartford, Gray moveed on to Sunday’s final elimination round against No. 1 qualifier Jeg Coughlin Jr. in Sunday’s final round.

After a 6.622-second pass at 207.62 MPH in his Valvoline/Gray Motorsports Chevrolet Camaro, Pro Stock points leader Tanner Gray continued to prove that he is the driver to watch in the 2018 Countdown.

“While we have been struggling with qualifying a bit, we have continued to pull it out on Sunday,” said Gray. “While some of this may be luck, I believe that a lot of this has to do with making good runs and beating the other guy in the lane. It’s awesome to have the group of guys I have around me and I look forward to seeing what they can do throughout the remainder of this season.”

Thanks to this recent win, Gray retains a 52-point lead over Mountain View Tire driver Vincent Nobile as the Series heads to Charlotte Motor Speedway.

Stay tuned to RacingJunk.com as the champions of the NHRA compete in the fourth race in the Countdown to the Championship at the NHRA Carolina Nationals at zMAX Dragway in Charlotte, N.C., Oct. 12-14, 2018.