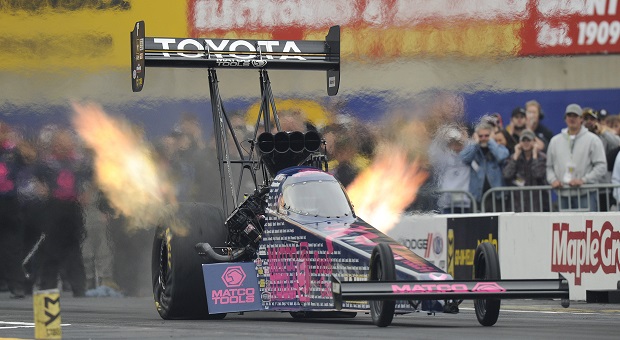 The unpredictability of NHRA Drag Racing makes it a perfect subject for New Year resolutions, because most likely all of them will be broken by the time the circuit completes at Pomona in February.

Every team sets their sights on a perfect season, leading every qualifying session and dominating on Sunday.  That’s why we make those New Year Resolutions – to place our focus on improving or bettering any outcomes.  If the drivers could take what they learned from 2016 and deliver that in 2017, then those resolutions will come true, but for the rest, it could all just turn out to be dreaming.

Rookie candidate Troy Coughlin, Jr. will probably be the one making the most resolutions, having a clean slate and a promising Top Fuel career ahead of him.  Likewise, his Kalitta Racing teammate J.R. Todd is in the same situation, beginning a Funny Car profession. You know he has his priorities set on doing the right thing.

Will Tony Schumacher make his resolution to become an 11-time Indy winner?  I know Angelle Sampey doesn’t want to wait another nine years before winning another Wally.  After 10 consecutive final round appearances in Denver, will Pro Stock’s Allen Johnson go for his 11th try? Antron Brown is looking forward to becoming a 4-time Top Fuel champion, with around 15 other rail drivers disagreeing with him. 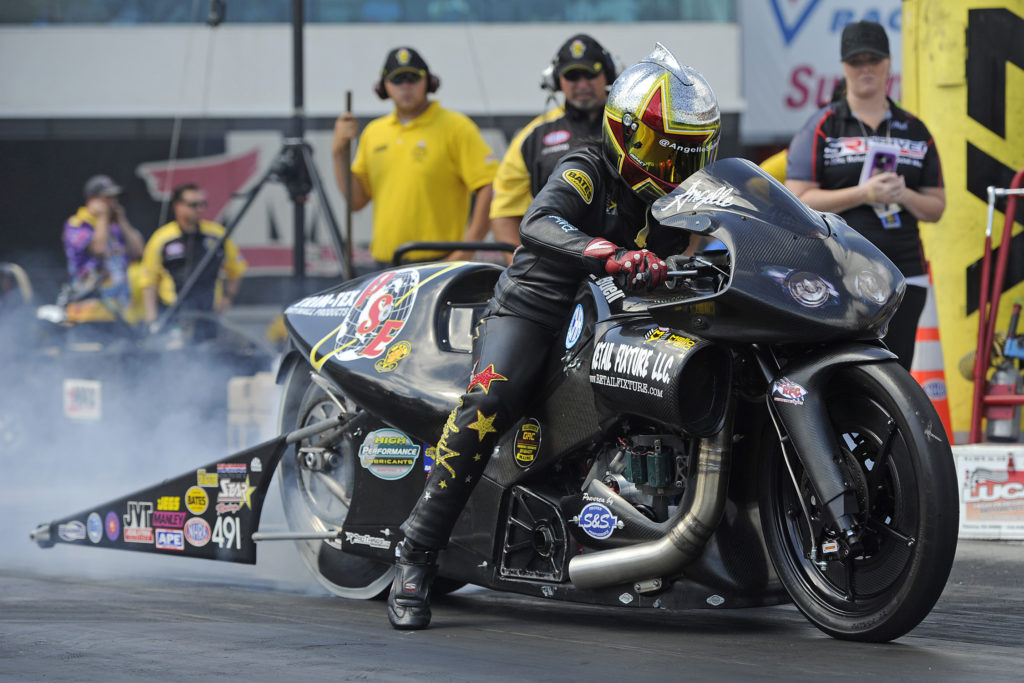 Next year sees Pro Stock Motorcycle newly crowned champion Jerry Savoie adding to his armament with LE Tonglet on board, and these two should be another ‘dynamic duo.’  Funny car pilot Matt Hagan knows he can go quicker than 3.822 seconds, but in 2017, are we in store for the first sub 3.70 flopper run?  His booming speed of 335.57 set the mark, and he wants to stay the Funny Car National Record-Holder in both categories for another year.  If his crew chief Dickie Venables has anything to do with it, look out for this three-time champion to become a fourth next year.

Speaking of Don Schumacher Racing, they had nine double-doubles, taking both nitro classes in 2016. I guess they’ll be shooting for 10 now.  I know defending Funny Car champ Ron Capps will be out to defend his title.  After having to wait for 20 years, he doesn’t want this feeling to go away! 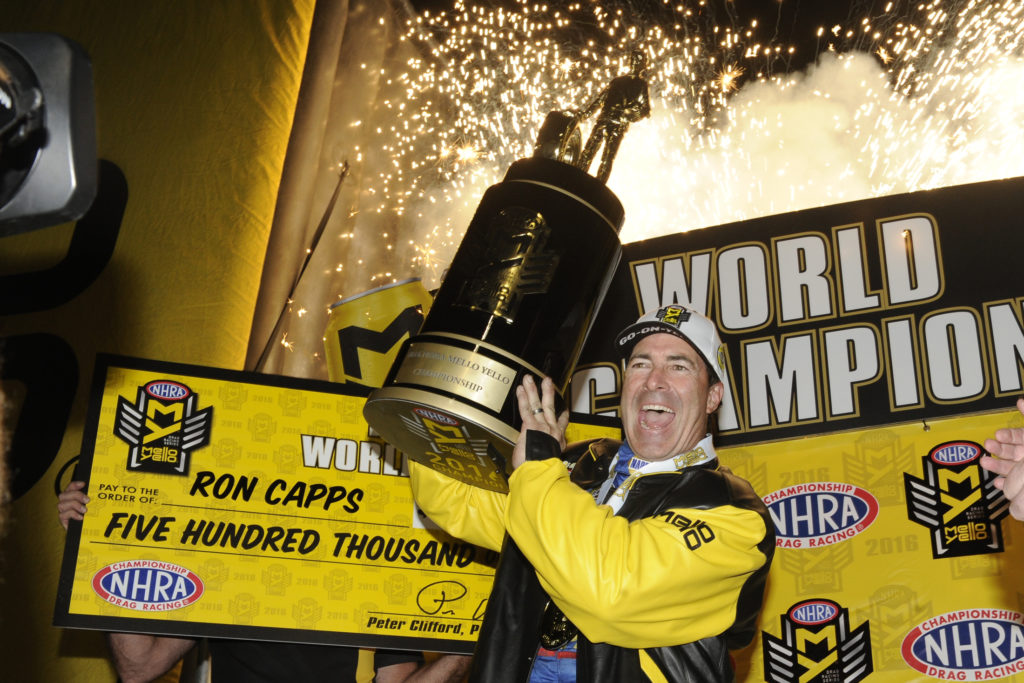 Tommy Johnson, Jr. has the best average finish in the points standings over the last three years and his resolution for 2017 is to improve on that with a championship title of his own.

The turnaround for Elite Racing and Pro Stock’s Erica Enders and Jeg Coughlin – back to the Bow-Tie brigade in identical Chevrolet Camaros – rather echoes the saying, ‘if you can’t beat’em, then join them.’  As the rest of the Detroit Hot-Rods were beginning to catch the KB Racing tandem of Jason Line and Greg Anderson, it was proven during the Countdown that wasn’t the case, coming down to three points between them; but shortly afterwards, in third, Shane Gray was 147 points in arrears to show KB’s dominance of the class.

Andrew Hines is now the face of Pro Stock Motorcycle, surpassing Dave Schultz’s long-time record of 44 wins; Hines now has 47.  The women of the sport have been prominent players all last year and you can count on Enders, Brittany and Courtney Force, Alexis DeJoria, Leah Pritchett and Angelle Sampey to reprise their roles as heavy hitters when the Countdown arrives in 2017.

Texas horsepower from Steve Torrence will still be a thorn in Antron Brown’s side next year, and I’m sure his Alan Johnson has set that as priority one.  Feeding off the information from Brittany Force’s Top Fueler, this tuner is rested and ready to bring it.  Let’s see how much of an active player Del Worsham will be after rejoining his family team. 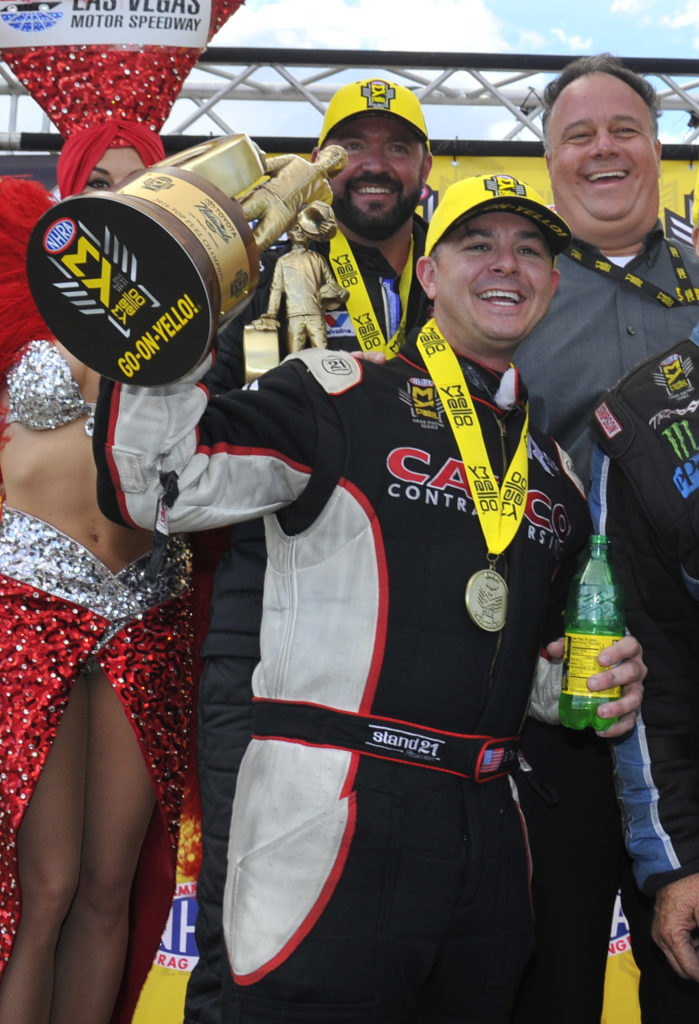 Now, which drivers have set their resolutions to get their first win?  First one who comes to mind is Clay Millican – can he finally break through along with Terry McMillen in Top Fuel?  Can Chad Head rise up to his potential with a tremendous win for Head Racing?

Certain New Year resolutions we hope not to see in next year will be the aerobatics of Cruz Pedregon in his Las Vegas high-flying act matching those down the boulevard at Cirque du Soliel.  Two of the more memorable high-speed explosions everyone witnessed this season belonged to Jack Beckman and Robert Hight.  Just wish there was some way confront that problem, and stronger parts are on the way I’m hearing.

The sport’s biggest notions for 2017 are hoping not to have to wait another 675 Top Fuel events before our next all female finals, like that last held in 1982.  Seeing Brittany Force against Leah Pritchett at Phoenix was a match to remember. How many more dead heats will we see in 2017 like Todd and Doug Kalitta in Atlanta?  The hope of seeing a 200-mph Pro Stock Motorcycle rider is right around the corner.  NHRA All-Access is back for next year and still awaiting the FOX Network TV schedule for ’17.

Optimism is running high for 2017 and there are only 45 days until Pomona’s Circle K Winternationals., which take the green light at 11 a.m. PT on Sunday, Feb. 12.