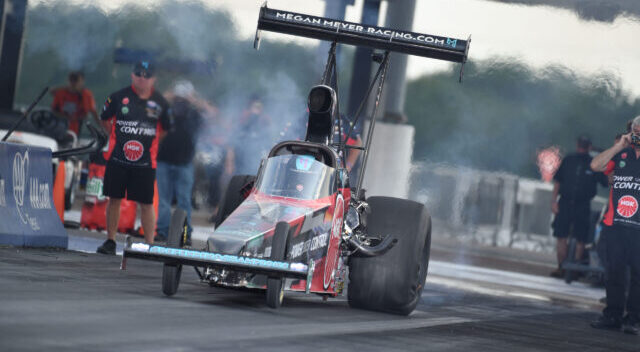 NHRA’s 2020 season was a spaghetti western with good, bad and ugly qualities to it from February through to the first of November.

The intended 24-race Mello Yello campaign started traditionally in Pomona – with one big exception: the Top Fuel champion decided not to compete in the first race of the year. Steve Torrence, then a back-to-back titleholder, had his reasons for sitting out the first race. In particular, he was peeved by the series’ reaction to his temper tantrum in the season finale, when he didn’t like the starting line procedure of his first-round opponent, Cameron Ferre, driving Terry Haddock’s rail.

Torrence returned in the second race of the year outside Phoenix, held two weeks after Pomona, and promptly racked up his first win of the year. He’d done a bit of testing at Wild Horse Pass Motorsports Park, and “Them Capco Boys” were ready for action. Torrence had to defend against Doug Kalitta, who fell to the Texan by three points in 2019 and had already notched his first win of the new season.

Kalitta’s season fell apart by the time the series came to Las Vegas to end what turned out to be a 12-race campaign, one that was sponsor-less for a couple of weeks after Coca-Cola Companies failed to submit its half-year scheduled payment to NHRA, an attempt to depart before the contract ended. (Coke had tried to terminate in 2019) The series filed suit yet attained great fortune when Camping World’s owner Marcus Lemonis came onboard to first lend his company’s name to NHRA and, hopefully, secure financial backing that will see NHRA restore purses.

Restore purses. After the pandemic hit, NHRA cut much of its staff and slashed payments to racers. The series went from late February to mid-July without a single nitro-burning vehicle on-track. And when it did return to racing, NHRA placed its first four contests at the home of its most prestigious race, Lucas Oil Raceway outside Indianapolis, home to the U.S. Nationals. The three-race “return” didn’t tarnish the Nationals at all, and racers from around the country flocked to Brownsburg, Ind. on Labor Day weekend like swallows to Capistrano.

People without an affinity for motorsports don’t understand why racers continued to compete even without the financial backing they received prior to the pandemic. They didn’t get it but the racers sure understood that racing isn’t everything; it’s the only thing. We compete because we must. NHRA was fortunate – again – that racers compete regardless of the payouts. Or at least they did in 2020; it’s unclear if the diminished returns will keep everyone coming back in 2021.

One thing NHRA did better than any other sporting group was get fans to the races. Attendance was limited for the 10 contests held after March, but fans were allowed in the stands, in the pits and they relished the ability to watch racing after the first pandemic lockdown. In fact, the NHRA season finale in Las Vegas was Nevada’s first fan-attended sporting event since the pandemic began.

Don Schumacher Racing was hugely successful in its Funny Car campaign, with four entries wheeled by Jack Beckman, Ron Capps, Matt Hagan and and Tommy Johnson Jr. winning every 2020 race. Two of its floppers bore backing from Doug and the late Terry Chandler, whose “giving cars” allowed Beckman and Johnson Jr. to race with cars bearing the names of the Infinite Hero Foundation (Beckman) and Make-A-Wish/MC Anderson Cancer Hospital for Johnson Jr. Johnson Jr. came second to now-three-time champ Hagan in the final standings and Beckman finished third, while Capps came fourth. They all won on the year and Hagan’s Dickie Venables’ tuned Dodge Charger SRT Hellcat was the cream of that crop.

Or course there was the monstrous elephant in the room – or the absence of it – that allowed DSR to run the table in Funny Car this year. John Force Racing was unable to mount a challenge, as the team vacated its spots in the pits for 2019 Funny Car champ Robert Hight, 16-time titleholder John Force, Top Fuel racers Brittany Force, the 2017 champ and 2019 rookie of the year Austin Prock. This powerful team sat out the balance of the 2020 season after the pandemic hit and team owner John Force never truly explained his rationales, allowing rumors, rather than facts to dominate any discussion. He has said he’ll be back next year.

This was the final year for the “giving” cars and it is apparent Tommy Johnson Jr.’s car will be idle in 2021. The crew that worked with Johnson Jr has encamped to Cruz Pedregon’s team down the street in Brownsburg and nothing is known about Johnson’s future. At this time there’s been no further info on the possibility of Beckman’s continuation with DSR, either, although both Hagan and Capps, together with their sponsorship partners, return for the 2021 campaign.

With both Top Fuel and Funny Car emerging with three-time champions, it fell to the two Pro Stock divisions – car and motorcycle – to produce four-timers in Erica Enders and Matt Smith. Enders surpassed both Shirley Muldowney and Angelle Sampey, both three-time champs in Top Fuel and Pro Stock Motorcycle, respectively, as she trounced the field in her Elite Motorsports Chevrolet Camaro. It looked closer than it was and, when Enders earned her U.S. Nationals win in 2020 after being shut out by teammate Alex Laughlin in 2019, her next goal was the attainable fourth title.

Matt Smith missed out on a fourth championship in 2019 when he had mechanical issues in the season finale’s semifinals. The 2020 season marked a finale replay as the second-generation drag racer, who fell to race runner-up Steve Johnson in the semifinals with a yet another mechanical issue on his EBR, watched wife Angie Smith earn the win as he took the title. The party in their pits afterwards went on for hours.

So looking ahead to 2021,  there are many issues NHRA must tackle to ensure a successful campaign for its professional – and amateur – ranks. Even as the musical chairs continue as crew chiefs arrive and depart from various teams – Mike Green just joined sophomore Justin Ashley’s family dragster team – the sanctioning body needs to contend with the anger over falling payouts to racers, needs to keep fans activated – it was one of the only sporting endeavors to permit fan attendance at every race – and must ensure Mr Lemonis’ pleasure with his latest investment. Those are some tough nuts to crack. Are NHRA ’s operatives up to the task?